Jin San (1661 - ...) was a Jingdaoese official who lived during the Great Jing Dynasty. Born as son of the popular and influential Zhang San, at first he did not follow in his father's footsteps: instead of studying law, he went into business. However, Jin eventually became Diwang in 1690 AN, when his father was forced to retire from public service.

He is known to be a personal friend of the Chidao Emperor and one of the few trusted men who can freely enter and leave the Heavenly Palace. Opponents have dubbed him the name Shadow Emperor, thanks to his influence among both the Court, the Guanchang and Shanghu Factions.

As entrepreneur and starting politician 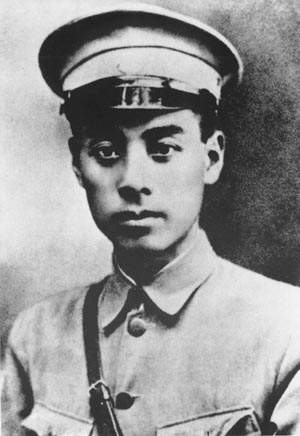 Jin San as member of the Imperial Kadetten when he was 18 year old.

Born as one of the many children of Zhang San (he himself being the seventh in a row of more than 16 sons), Jin sought to find his own path. Just like all his family members, he joined the Young Wandering Society at a young age. There he was found fit to join the Imperial Kadetten, but his supervisors soon criticised him for a lack of effort and patriotism , as he had voiced concern about running through a minefield.

At 19 years old, Jin refused to join the Armed Forces and instead lent a huge sum of money to invest in a new company which he started. His family name soon helped him to start Zhang Heavy Industries, which he named after his father. This gained him support among shareholders and gave the impression that his business was - in some sense - supported by the second mightiest man of the Empire. In private, Zhang would have condemned his son's actions, but held his tongue out of curiosity what would happen with this perky child of his.

His company, which was located in Mengjing (in Zhijin, near Daocheng), benefited local economy and Jin's popularity and renown grew. It was in 1682 AN, as head of the company, that he met the Chidao Emperor. Both men were around the same age, seemed to hold the same interests and became friends.

Around the time he met Chidao, Jin started to show interest in politics. He was eventually chosen as mayor of Mengjing, after which he introduced a series of infrastructure improvements. Improvements in its public transport impressed officials from the capital, and his expertise was in high demand.

The financial crisis in 1690 AN led to stagnation of the economical growth. The lack of progress and modernization in certain areas as the armed forces (especially strategically), had become an apparent issue of frustration at the Court. Zhang San, who shad always attempted to keep the middle road, was now viewed as someone who was dragging the Empire down. He was forced to retire and the Chidao Emperor contacted and eventually appointed Jin to replace his father.

As Jin's appointment was sudden and unexpected, he is often seen as the first of the Young Guard with whom the Emperor started surrounding himself. Jin was non-aligned: both the Guanchang as Shanghu Factions started claiming him as one of theirs, while the Gunbatsu and Kantai-ha saw him as yet another paper eater.

From 1695 AN and onwards, he faced the post-Chidao Troubles. Jin, while in charge of the government, soon discovered that many within the government vowed for power. With a Heavenly Light who was unprepared (and according to some even unwilling) to ascend the Throne, his power over the regions which remained loyal to the Crown were limited. Even within the capital itself, it was Lin Zexu, Imperial Magistrate and Commander of the Eight Gates, who limited the Diwang's every move (and even ordered his house arrest while the investigation into the 'ascension' of the Chidao Emperor was ongoing).

Having failed to restore imperial power, Jin's career received another heavy blow with the 1699 Xinshi Denouncement. While it hardly effected military progress, it was perceived as a heavy blow to the prestige of the Heavenly Court and the Diwang. Both within the Grand Secretariat and other government organisations he came under fire and was seen as lacking the experience and strengths of his father, Zhang San. Especially the Gang of Four - which already had grudgingly accepted the formation of the Great Apollonian Empire - saw him as a danger to the Empire.

In 1700 AN, Jin was replaced by Hon Ben Erasmus, who blamed Jin San for the Court's weaknesses. Having rallied influential figures around him (and himself descending from the House of Erasmus), Hon Ben had little difficulty to overthrow Jin.