The Hoshasei Emperor (放射性皇帝, Hōshasei kōtei) 1644 AN - ...), also known as Hon Ben Erasmus or Hon Ben Jade (or Hon Ben Gyoku; 本ㄅㄣ玉), was the first and only Emperor of the Empire of Hondon. He was the son of Princess Yuling, who later became Heavenly Light. As nephew of the Hai Emperor, Hon belonged to a cadet branch of the Heavenly Family, the House of Gyoku (named after the Jade Palace his mother resided in during her youth). From 1700 to 1707 AN, Hon presided Jingdao as Diwang. The Fortuitous Immolation eventually led to his retirement from the national political scene, after which he focused on expanding his enterprises throughout the Imperial Republic of Shireroth. He was appointed Vice-Roy of Hondon by the Xinshi Emperor. 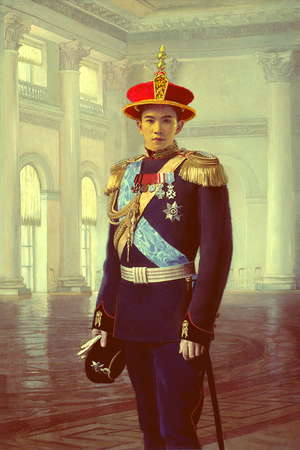 The 13-year old Hoshasei Emperor in modern Jingdaoese court uniform, at the end of the War of Lost Brothers. He was made to look older in the portrait.

Still a child when the Empire of Hondon was proclaimed, but often seen as remarkably grown up. As oldest son of Princess Yuling, who eventually became the Meiyo Emperor after the death of Her brother, the Hai Emperor, he became heir to the Heavenly Throne. With the discovery of the (at the moment of Meiyo's ascension still unborn) royal prince, Chidao, he lost his position of heir, but remained active in court politics. He supported his imperial nephew from behind the scenes and proved a strong supporter of the Imperial Court.

He became CEO of the Tranquil Jade Tea Society in 1682 AN after the retirement of his mother.

As CEO of the Tranquil Jade Tea Society, Hon Ben remained out of the spotlight. It wasn't until the collapse of order during the early days of the Post-Chidao Troubles, that he - pushed by close friends - started gaining attention and political influence. He made clever use of the fact that he remained relatively free to move, while his niece - the later Xinshi Emperor - and her government were put under house arrest by Lin Zexu, Imperial Magistrate and Commander of the Eight Gates.

Lin Zexu, a personal friend and staunch ally of Hon Ben, urged him to take charge over government affairs during the chaos. Hon Ben disagreed, as there was still a capable heir to the Throne, although the disappearance of the Heavenly Light - Chidao - made officials uncertain of the necessity of an enthronement (with which precious time was lost to stabilise the realm).

Instead of taking the regency, Hon Ben started bribing local warlords in the hope to reunite them with the Daocheng government, once the country was stabilised. Yoshi Iwao was among those who he could -eventually- call an ally. With his rise to power over the Gunbatsu Clique, Hon could start negotiating a treaty of cooperation and re-integration between the Heavenly Court and the most powerful military cliques. 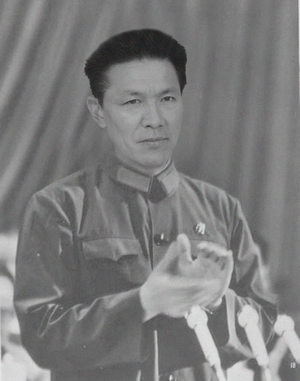 The Decade of Inharmonious Regrets was one of backstabbing, a mixed bag of successes and ultimately failures.

Hon Ben became a critic of the merge of the Great Jing with the Cakaristan. He increasingly voiced his concerns about the weaknesses of the Court and the Heavenly Light, in which he blamed Diwang Jin San. He was eventually thanked for his services due to his stubborn resistance and sent to the re-established Hondon Province as Vice-Roy.

Eventually, he successfully sidelined his rival, Jin San, by establishing connections between his closest allies and forging the Gang of Four, whom were upset with the changes within the Empire and its integration within Great Apollonia. Having lost the opportunity to end the unification, Hon seized control over the Grand Secretariat by convincing his niece to grant him the position of Diwang. The title itself had become almost worthless, as more power was divided between States and Federal authorities.

The Gang of Four and Hon brought the reformation of the state to a grinding halt and, while not directly blocking integration, started strengthening the Jingdaoese Community and their own positions. His political gains were partly thwarted when - in 1707 - the Second Kildarian Revolution broke out. Hopeful of using the revolution to break the union with the Cakari, he remained impartial towards calls to subdue the revolutionaries with the vigor he would have had years earlier.

The revolution was successful, but Hon had miscalculated and saw a lot of his power base fall apart. Thanks to his influence, he remained Diwang of the new Kildarian-Jingdaoese state, but with a lot less power in his hands.

The Democratic Apollonian Republic of Kildare, spearheaded with Hon as figurehead, proved unable to combat the problems of the Great Jing Dynasty. With the Xinshi Emperor remaining neutral and seemingly uninterested in political affairs, the Kildarian and Jing officials lacked a unifying leader to rally behind. Hon had some influence, but was constrained by Kildarian revolutionaries, who (rightfully) doubted Hon's commitment to the Second Kildarian Revolution.

The Fortuitous Immolation abruptly ended the syndicalist menace, with a Tegong conspiracy eventually leading to the collapse of Hon's administration. He was succeeded by Jin San (whom he himself had succeeded 7 years before), who spearhead the annexation of Greater Kildare into the Imperial Republic of Shireroth. Hon did not take long to proclaim his support for the move, and might even have had a hand in coordinating the Tegong's actions.