From MicrasWiki
(Redirected from Kildare)
Jump to navigationJump to search

"Greater Kildare is by far the largest region within the Imperial Republic. Ranging from the Carama Bay with is gentle sea breeze to the rough and icy waters of the Northern Sea. From the vast Riponian steppes with its nomad tribes in the east, to the industrious cities at its western coastline. The Region is both rich in land, resources and people. One can almost not fathom that these Lands, which are divided into six mighty fiefs, were once united as one under the Great Jing."
Hai Pei, scholar at the Ecclesiastical Academy of Pentapolis, nephew of the Duchess Liu Pei, 1707 AN. 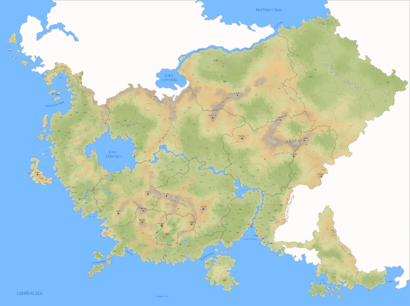 Map of Greater Kildare, drawn in 1707 AN (source: the Gurandoatorasu, Great Atlas of Jingdao).

Whomever looks at the map of the region of Greater Kildare, or Eastern Imperium, feels impressed by its sheer size. Ever since its independence as an nation in 1617 AN, it not only kept most of its ancestral lands (with exception of the Norfolk Islands and Aryasht) but successfully expanded east and northwards during the Great Jing.

During its expansion under the Great Jing, the tribes which once raided villages and threatened cities within Kildare's heartland, were subdued. The Zygus Qamil, a defensive line of bunkers and castles, which once stood as a proud example of Shiro-Kildarian engineering, wastes away, with time as its sole enemy still standing.

The tribes of the east, now utterly crushed, subjugated, enslaved or integrated within Kildarian and Jingdaoese society, became merely a reminder of days long gone at the end of the 17th century. Only in the Lands of Qyzyl a visitor can still frequently visit a nomadic tribe. Those tribes, while mostly peaceful, still have territorial conflicts over the lands most fertile plains.

Bastard children born in Greater Kildare are called by the surname Lightborn.

Greater Kildare itself is divided in a number of fiefs, which are loyal to the Kaiser of Shireroth: