The Zygus Qamil (English: Eastern Wall) is a line of concrete fortifications, tank obstacles, artillery casemates, machine gun posts, and other defences, which Kildare (Shireroth) constructed along its borders with Antica, Holzborg and other nations.

The Kildari established the fortification to provide time for their army to mobilize in the event of attack and/or to entice (most importantly) Antica to attack via a neutral Natopia (and so go to Audentior and Apollo City) to avoid a direct assault on the line.

The construction of the defenses began in January 2010 and ended in August 2010.

The specification of the defences is very high, with extensive and interconnected bunker complexes for thousands of men. There are 57 main forts, 120 smaller forts and 467 casemates between, with over 250 kilometres of tunnels. Artillery is coordinated with protective measures to assure that one fort can support the next in line by bombarding it directly without harm. The largest guns are therefore 135mm fortress guns. Larger weapons are to be part of the mobile forces and are to be deployed behind the lines.

The fortifications did not extend through Audentior, which was believed to be safe from attacks. However, fortifications have been made around Apollo City and Apolytown.

There was a final flurry of construction in 4022 ASC with general improvements all along the Qamil. The final Qamil is strongest around the important industrial / administrative regions of Apollo City, Destrykara and Blackrock Nua, while other areas are in comparison only weakly guarded. The Qamil in Kitanus Fields, for example, is less defended and fortified because it borders unclaimed land which belongs to no nation. 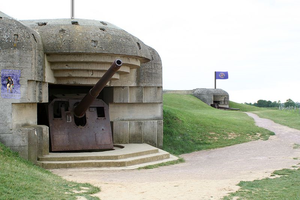 Some bunkers at the Antya River.

Although the name "Zygus Qamil" suggests a rather thin linear fortification, the defence line is quite deep, varying in depth (i.e., from the border to the rear area) from between 10 to 20 kilometers. It is composed of an intricate system of strong points, fortifications, and military facilities such as border guard posts, communications centers, infantry shelters, barricades, artillery, machine gun, and anti-tank gun emplacements, supply depots, infrastructure facilities, observation posts, etc.

These various structures reinforced a principal line of resistance, made up of the most heavily armed fortresses or major defensive works.

From the front and proceeding to the rear, the Line is composed of:

In contrast to the weak lines in the north, the propaganda about the Qamil makes it appear a far greater construction than it is. Illustrations show multiple stories of interwoven passages, and even underground railyards and cinemas. This reassured allied civilians. This, however, doesn't mean that the Qamil is weak. Tactical places (border with Antica, important cities, etc.) are very well protected.