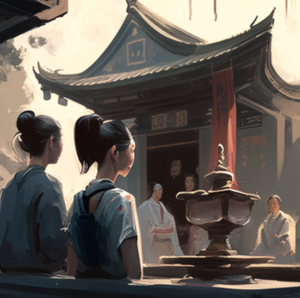 The Jinken Emperor introduced a policy of morning prayers in 1608 AN to honour the Heavenly Light. This became the basics of the introduction of Tianchaodao as state religion three decades later. The Prayer was further expanded to celebrate the Kaiseress of Shireroth.

Tianchaodao, meaning "The Way of the Empire" in the Jingdaoese language, was the state religion of the Great Jing between 1642 AN and 1704 AN. These days it's also known as the Imperial Heavenly Cult or Wanderers of the Pure Path. It was not a 'religion' in the normal sense of the word, as it was more an ideological set of beliefs to strengthen the ties and loyalties of the Empire's subjects to the Heavenly Throne. It acts as the dominant Cedrist cult and Temple within Greater Kildare, succesfully retaining its dominant position in the eastern part of the Shirerithian Empire and spreading its influence westwards.

With the Salomeid Revival, and the donation of the Heavenly Mandate by the Xinshi Emperor to Kaiseress Salome, a series of reforms were introduced to align the Faith with Cedrism.

The Tianchaodao is based on the belief that there is multiple deities who created and oversees the world. Several of these deities are believed to have a personal interest in the well-being of the Shirerithian people, and are responsible for bestowing blessings and rewards on those who obey its laws and commandments.

It also teaches that the Cedrist Gods have a special interest in the Imperial Republic, and that it has appointed the Kaiseress as its representative on earth. She is aided in her mission by the Heavenly Light, who guides the Kaiseress on the Path to Ascendance to Divine Godhood. As the earthly representative the Kaiseress is responsible for ensuring that the laws and commandments of the deity are followed, and that the Shirerithian people are protected and prosperous. Failure to do so may result in punishment from the Heavenly Temple, including loss of blessings, rewards, and even one's life.

It was originally an offspring of Catologism. The main teaching of Tianchaodao was complete submission to the divine Heavenly Light, as it was the only road to salvation and the only way to serve the Gods. The Way of the Empire did not dispute that there were other Gods than the Heavenly Light, but did not allow the Jingdaoese people to worship them, instead the people should worship the Heavenly Light.

The faith went into a crisis, when - after the death of the Chidao Emperor - his successor refused to take up Her role as worldly leader.

It kept its status as de facto state religion within the Great Apollonian Empire and while the Jingdaoese Community was replaced by the Democratic Apollonian Republic of Kildare. Eventually, in 1707 AN, the Xinshi Emperor announced Her intention to reform the religion, so it could aid in strengthening ties between the western and eastern parts of the Imperial Republic.

The Tianchaodao, has some central tenets: 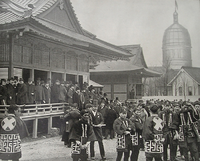 The ho an den - this one being located in Chuan Ke - became an important part of daily life for the Jingdaoese citizens: under the early reign of the Hoshasei Emperor, daily rites were done at the start of every school day. Soon this practice became obligatory in all companies and organisations across the country.

Temple and shrine visits are a common part of the daily life of a follower of Tiachaodao. During the daily prayer ceremony it's tradition to pray for the well-being of the Imperial Republic and its religious and earthly leadership. Most believers turn to the Kaiseress and Heavenly Light in their prayers. After all, they represent the Faith, so that specific supplications to the countless gods are not necessary. Those who want to deal with a god in more depth, or simply have a specific question or problem, then turn to that specific deity. However, such prayers usually do not take place during the daily prayer ceremonies, but separately and in a more modest circle.

The Prayer Ceremony is integrated into the school curriculum, and every school in Greater Kildare has at least one ho an den (a special shrine with the pictures of the Heavenly Light and the Kaiseress). Since 1716 AN, the Mango-Strengthening Movement (under pressure of Jing nobility) has pushed for the creation of ho an den's and implementation of Tianchaodao in all Shirerithian schools.

One of the used prayers:

Almighty Gods,
We give You thanks for the Heavenly Mandate of our Kaiseress, who provides earthly protection of the Faith and its Followers.
May She find Godhood and eternal enlighthment on Her Path.


We give You thanks for the guiding hand of our Heavenly Light.
Blessed is She who guides us along the Pure Path to salvation.


May They ever be faithful servants of the will of the Celestial Temple and a beacon of hope to all who look to her for guidance.
We ask that You continue to bless her with Your wisdom and strength, and keep Them safe from all harm.
Grant Them the grace to lead Your people in righteousness and peace, and bring us all ever closer to the salvation. 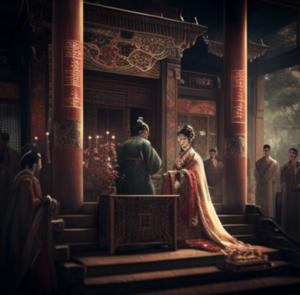 Wedding of Prince Ichirō and Lady Kaika, in Daocheng.

Divorce is accepted among the followers of the Cult.