Chrysostom Wythe, Count of Woodshire, Viscount Holly-Wythe, born in Goldshire Hamlet Goldshire (now Ransenar), 1607, is a Shirerithian nobleman and statesman. Steward (head of the executive) of Shireroth since 1680. Regent of Shireroth during the illness of the Kaiseress, 1682–1683. He belongs to the Wythe family and bloodline.

A grandchild of Kaiser Wythe (reigning 1589–1591), Lord Chrysostom Wythe, as he was then known, grew up in a lush estate outside Goldshire Hamlet. Studied law at Metzler University 1616–1625, graduating with a doctorate, after which he joined the Shirerithian Ministry of the Exterior as a lawyer in international law. Headed the international law division until his retirement in 1660, whereupon he joined politics in the Imperial Democratic Party, elected to the Adelsraad in the same year. Appointed Commissioner of Representation (deputy Minister of the Exterior) in Shireroth later the same year. Promoted to Imperial Minister of the Exterior in 1672. Appointed to the peerage as Viscount Holly-Wythe and to the Landsraad in 1674. Appointed Steward in 1680. In 1682, due to a period of prolonged sickness, Salome directed the IAC to appoint him as Regent.

His father, Prince Alexander, is the second child in a group of triplets born to Abigail Margaret Smith and Kaiser Wythe (reigned 1589–1591). Alexander's elder sibling was his brother Prince Montgomery and his younger sibling was Princess Charlotte of Shireroth.

Prince Alexander married Lady Kaja Grengaezj-Swar. They had two children, Chrysostom and Alexandra Désirée. Both Alexander and Kaja died in the Oustfest Massacre of 1644.

Chrysostom remarried two years after after the death of his first wife, to longstanding mistress Winona Tomchin (b. 1645). Their descendants are:

In early 1701, Chrysostom filed for a divorce from his wife, Winona, which was finalized on 5.II.1701. He subsequently married Teddie Lettice, a former coursemate of his daughter Dina, and later employee of his in the Ministry of State, on 16.II.1701. Together they had two daughters:

By 1712, Chrysostom had discovered that his wife Teddie Lettice had in fact had a decade-long affair with his son (by his ex-wife Winona), Edan Naftali Wythe. He invited his wife to file for divorce and live out their lives in peaceful cohabitation, but banned the couple from ever marrying with one another. Teddie and Edan agreed. Teddie subsequently filed for divorce, which was finalized by court order on 10.XIII.1712.

On 20.XV.1713, he married Catherine Fish, a male-line descendant of Kaisers Fish XII and Reynardine I, in a private ceremony in Shirekeep. A son was born in 1714, and a daughter in 1716: 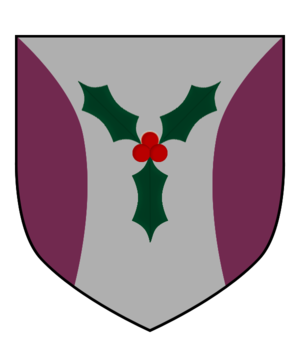 Coat of arms of His Serenity the Count of Woodshire, since 1710