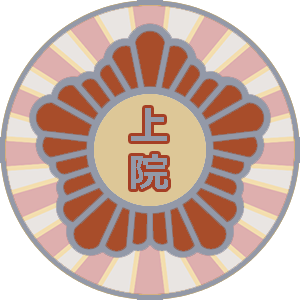 Emblem of the Seanad.

The Seanad was the most important political institution of the Eastern Empire [1] and stayed an important political institution of the Apollonian Republic. It acted as both a legislative and advisory council in the day-to-day affairs of the Republic. It was comprised of Senators, which in the Shirerithian days were nobles who acted as representatives of their Counties, but during the Republican era were military representatives for each District.

During the Jingdaoese period it acted as a supreme court in Jingdao, and first consisted of the highest nobility of the Realm. After the Xianfa Constitution, it became the upper house of the National Diet.

The Seanad is composed of fifteen members: fourteen governors - appointed by the Emperor - for each Province and the Emperor himself. The Heavenly Light presides the meetings.

The title of Senator (or Seanador) still holds prestige, even while lacking in power. 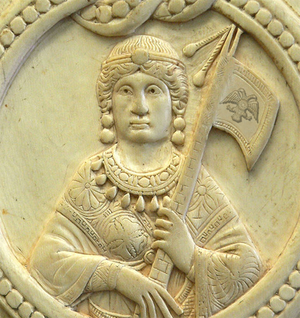 The personification of the Seanad. From the diptych made by order of Dutch Flavius I to commemorate the revival of prestige of the institute.

The institution had it roots in Blackrock, of which it was original an advisory council of the Count. It inspired the Dutch - who at that moment resided in Blackrock Nua - in increasing the power of the Seanad in 3260 ASC by establishing it as the Ducal legislative and advisory council, consisting of Barons.

Through time the power and duties of the Seanad were slightly altered. It saw its power peak with the death of Dutch Ionas I, with the proclamation of Andreas I as the new Dutch. From that moment it kept its prominent position in society and succeeded in acting independently from the Dutch, who still resided in Blackrock Nua while the Seanad had long been moved to Apollo City. That moment it also saw increasing influence on the financial affairs of the Dutchy, contributing to the further decentralisation of the state.

In 5149, with the coup d'état by Taodosius I, the Seanad was temporarily disbanded [2]. The inefficiency and failures - mostly their inability to keep the armed forces effective against invading barbarians - made this a relative popular move among the population of Apollo City.

The dissolution of the institution, heavily advocated by Orare (title granted to the representative of the City) Basil of Apollo City, put Taodosius in a position that he could effectively rule unchallenged by anyone.

While there were promises made to restore the disbanded Seanad, this was not done till 5267 ASC. It's, however, known that the Senators still met each other to debate about political situations and even had the silent support of Dutchess Sophia Myksos to do so. The exact moment the Seanad was restored is not known, but the grand reopening of the Seanad building in 5267 ASC by Sophia has been marked as its revival. Since then it's often viewed as a rubber stamp institution, but the reign of Flavius Myksos marked a new beginning and small restoration of prestige.

The Revolution of 5552 rendered the Seanad virtually powerless as nobles started fighting among themselves and ignored the Seanad. The military refused to act in name of the Senators and preferred joining the cause of their commanding Mil. After the conquest of Apollo City, the Seanad was transformed into a council of military district governors who were in direct contact with the Caudillo.