Tzao Yao (1613 AN - 1697 AN) was an Imperial Jingdaoese Army general during the War of Lost Brothers. He was best known for the implementation of the Yao Plan, which he had drafted himself. His successful invasion of Xhusovo, the orderly installation of the Empire of Hondon under his guidance and the following successful campaign in the Florian campaign, made him an immensely popular public figure. The Florian surrender through the signing of the Treaty of Chuán Ké made him not only popular, but also the most influential military officer of his time. As only officer, he received direct access to the Heavenly Light, a honour he only shared with close members of the Imperial Dynasty.

During the Post-Chidao Troubles, he was pushed by his fellow officers to march the armed forces southwards to 'protect the emperor'. Against his wishes, he started the march southwards, but his troops ended up stuck between Dalmacijan rebels and Tegong troops. He eventually died in the port town of Houhangye.

Tzao was born in Kaimingcheng (formerly known as Epoli) in the Zhongji Province. His family belonged to the well-off middle class and even could pay for a select group of servants (a cook and a maid of Kildarian descent). From the maid he learned of the proud Blackrockian military past, which inspired him to pursue a military career from early on. His parents motivated him to join the Young Wandering Society on his fifth birthday. There he was seen as a mediocre foot soldier, but a decent strategist (knowing how to circumvent the enemy positions during war games and charging at the right moment). His parents eventually sent him of to join the Imperial Kadetten on his fourteenth birthday.

He graduated from the Military Academy of Kaimingcheng on his 18th. 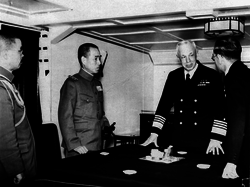 Tzao Yao in 315 EGA, on the day the Florians signed their surrender.

His accomplishments surprised even his closest allies, who had little trust in the tactics of Yao. The belief that the Florian campaign would end in a standstill, thanks to the large amount of Shiro-Florian defences and trenches.