Tyrannocricetus aliger (known colloquially as the Tee-al) is a highly aggressive species of giant avian cricetid residing in central Benacia where, despite being native, it is considered an invasive species due to its engineered origin. The animal has also been introduced to the Jingdaoese island of Wuqi in Western Benacia. It is known as Tufucangshu (murderous hamster) in Jingdao. The Luchtmobiele Brigade uses the fearful animal in its logo. 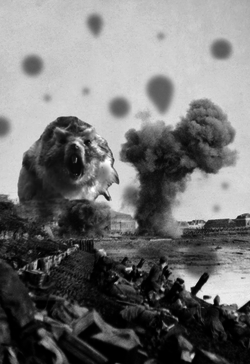 Minarborian artillery attempts to dislodge a specimen of T.aliger which is raiding a town for nesting material, and is none too pleased at the interruption.

Around 1629 Anno Nortone a faction of the genetically self-modifying race known as the Deep Singers, who had originated in Shireroth's Garden of Shimmerspring but migrated to Minarboria following a minor civil war, took avantage of the brief state of lawlessness in which they found themselves and decided to push the limits of the biomantically possible with the creation of the most physically and temperamentally extreme species of mammal possible. A search for a suitable base species revealed an unlikely candidate; the common hamster. In defiance of the normal laws of their art which had - and would soon again - bind them, the rogue lifemeshers suceeded in creating a formidable creature within the space of a few generations. Hamsters being known for their short lifespans, this was achieved with alarming speed.

The events leading to the first Tee-al escape remain unclear, as many of those involved in its creation were killed in a frantic attempt to contain the creature concerned. What is known is that the most recent modifications to the animal had caused an unexpected block in its testosterone reuptake, which only became apparent when its breeding season approached and a cascade of accumulated hormone caused it to explode with apocalyptic rage. This early in the colonisation of Minarboria, containment facilities were relatively crude and easily breached by the Tee-al. As well as killing or severely injuring most of its keepers, the animal's subsequent rampage destroyed the containment of other specimens and together they escaped eastward into the Benacian interior, stopping only occasionally to engage in a frenzy of mating. 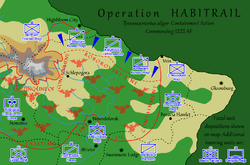 Dispositions of the forces involved in Operation Habitrail.

An attempted cover-up of the incident by the few survivors was only briefly successful, until Tee-als encountered the first substantial villages and towns. Having subjected all who approached them, including local law enforcement, to swift and effortless dismemberment, the population turned to the Royal Expeditionary Force; the army which had led the early colonisation of Minarboria and was, at that time, the most heavily-armed formation in the realm. While the REF succeeded in halting the Tee-als' further spread, it was never fully successful in its attempts to drive them away or eradicate them. Casualties suffered to Tee-als were extremely heavy in the early years, before a more reliable containment doctrine was formulated at a considerable cost in humanoid blood and lich phylacteries.

The effort was given added emphasis when the creatures began charging north across the Minarborian frontier into Shireroth, all but gifting the latter power a casus belli to annex Minarboria and complete its designs to conquer the entire Benacian continent. Being painfully aware of this, the Minarborian armed forces launched Operation Habitrail, an effort to sever the Tee-als' northern migration routes and bring their containment zone entirely within Minarboria. After several inconclusive skirmishes the operation, which amounted to a giant herding expedition by several thousand cossacks and numerous support elements, finally won a breakthrough at the Battle of Eversmann Hollow, a night action against a large Tee-al burrow complex which straddled the creatures' main migration route. Despite incurring 751 mostly-fatal casualties, the Minarborian force succeeded in breaking the up Tee-als' migration route and driving them back into the Minarborian interior. The resulting zone of containment, known as the Roborovski Line, would be successfully held until the Empire of Minarboria's collapse. The Minarborian leadership ignored suggestions to progressively constrict the containment zone and eradicate the Tee-al outright, citing the creatures' presence as an integral part of Minarboria's biomic defences against a foreign invasion.

With the collapse of Minarboria, the Tee-al was once more permitted to roam freely across south-central Benacia and the duty of containing it fell to the Shirerithian armed forces, as well as the people of the nascent Kalgachia whose flight to the safety of the Octavian mountains was greatly influenced by the creature's sparser presence in those areas.

It is said that the Tee-al is one of Minarboria's two great legacies to the world (the other being the Fischer-Preiss Carbine), a living reminder of that chthonically-charged empire and a salutary warning to all who might be tempted to dabble in the biomantic arts in the future.

The settlement of Kasterburg by Batavian settlers was inconvenienced greatly by the creatures, who chose the Kasterburgish steppes as their breeding ground.

The collapse of Imperial authority in central Benacia deprived local communities of the much needed air support once provided by dedicated attack squadrons of the Imperial Shirerithian Air Forces. As the Benacia Command of the Raspur Pact gradually asserted control in the region through the steady advances of the Black Legions it became an unavoidable reality that the Tee-al problem was now theirs to confront. In some respects the Tee-al was a blessing, by virtue of being an oversized and cunning apex predator it had the effect of keeping human population numbers down in the otherwise troublesome "Republic" of Inner Benacia across the border. On the other hand the Tee-al had scant regard for the niceties of borders and demarcation lines, finding the villages and farmsteads of Upper Lywall to be all too tempting and succulent targets. In 1672 alone upwards of 14,000[1] had perished in incidents attributed to Tee-al activity. It was not a situation whose continuation could be countenanced for long. To the XIII Salb "Salza" then fell the thankless task of finding and eradicating all nesting sites south of the old Minarborian containment line. As compensation for the invidious and dangerous work the legionaries of XIII Salb received triple the standard rate of pay for the duration of the operation. The main refinement on Imperial tactics by their Black Legion successors was to eschew aerial bombardment, mostly as guided munitions were in short supply and area bombing had proven inefficient, in favour of hunting Tee-als with wolfpacks of ten to twenty-five Bandersnatches whilst a Nereid served as the spotter, identifying targets and giving warning if the creature looked to be doubling back or about to make one of its terrifying gliding leaps. Ideally, the gravtanks would be able to herd an individual Tee-al towards a designated kill-box, exhausting it in the pursuit whilst keeping a safe distance. Once the opportune moment had been judged to have arrived, the Bandersnatches would close in and pummel the wretched creature with their 120 mm cannons until nought was left but a bloodied, lacerated, and lifeless carcass.

Since the close of the 1670's the primary burden of responsibility for hunting down and eradicating Tee-als has fallen squarely upon the Biological Remediation Service, a vast penitential network of penal battalions in which the criminals and undesirables of the UGB are used up in an unending war of attrition against that creature and all other manifestations of biota afflicted by the tampering of the Deep Singers. Subsequent to the Treaty of Gloomburg, cross-border cooperation in the eradication of Tee-al nests has become an established fact, particularly in the Upland Confederation.

By 1689 AN the Tee-al menace had been reportedly cleared from the Governorate of Upper Lywall, with three years having elapsed since the last reported slaying of a mature adult specimen within the governorate [2]. Roads up to the frontier with the Upland Confederation and with Kalgachia proper were in consequence declared to be open once more for all forms of traffic. A transformational moment in the fortunes of the region.

Eccentric farmers in western Amokolia have begun keeping T. aliger in farms, where milk (from the females) and meat (from the males, sold as "ham ham", short for "hamster ham") are produced. Regretably, the fur and leather from the T. aliger animals has low culture, though farmers express that through selective breeding, they might be able to produce "hamster wool". News of this development was not well received at the Court of the Prince in Eliria. 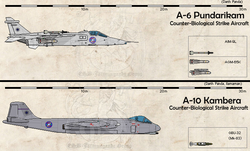 Shireroth maintained air force units dedicated to containing the Tee-al, in flight or on the ground.

Tee-als are considerably larger than the common hamster, with those specimens who survive juvenile combat with their larger peers capable of growing to the size of a building. They are equipped with clawed, batlike wings which permit short periods of flight including an ability to hover. Utilising ground effect in low-level, skimming flight, Tee-als can put on bursts of speed approaching 100km/h. 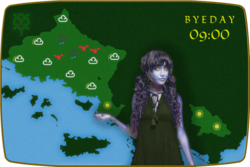 In addition to large, sharp claws and larger, sharper rodent teeth, the Tee-al has with a long tail with rows of serrated spines. This tail, used to devastating effect in meleé combat, can also be flicked at near-supersonic speeds to launch these spines as missiles. The Tee-al appears to have the ability to control the amount of spines released in a given flick, as well as enjoying a superb aim. Each missing spine, composed of a reinforced calcium-keratin lattice, can be regrown in as little as four weeks.

For defence the Tee-al has a thick layer of subcutaneous armour plate, bulging beneath the fur around most of its body. The head is especially well reinforced and has been known to deflect hits from anti-tank munitions of up to 75mm calibre fired at almost point blank range. There is no reliable weak point in this armour, which must generally be struck with repeated blows from high-calibre weaponry until accumulated hairline fatigue causes it to shatter, or else suffer a lucky hit along the overlapping seams between individual plates of bone. In more recent times, hypersonic kinetic weapons have shown greater promise in reliably slaying the creatures, although the cost per unit of such hardware makes their deployment at scale somewhat difficult.

The Tee-al's senses are acute, with pin-drop hearing and eyes which are exceptionally good at detecting even the slightest movement despite being permanently bloodshot from elevated, hormone-laden blood pressure. It whiskers, while small, can detect vibrations in the air almost as well as its ear drums. The only sensory area in which the Tee-al can be considered deficient is smell, which is only used to follow the pungent pheromone of the opposite gender. This lingering stench has been likened to a bucket full of fish heads and broken eggs which has been left in the sun for a week, and provide a vital clue to the presence of the animal when it cannot be seen.

Being somewhat omnivorous, immune to climactic extremes and having no natural predators aside from the armed forces of human nations, the Tee-al is theroetically capable of existing in any land habitat on Micras, and only appears to be prevented from doing so by the periodic expenditure of blood and iron by those jurisdictions into which it wanders.