Descent into hostilities (VII.–VIII.1692 AN) 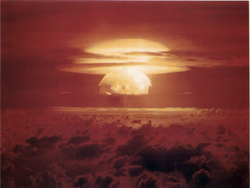 Eliria: Ancient seat of Elwynnese administration and culture, was amongst the first cities to perish on the fateful day that marked the commencement of the Scouring. 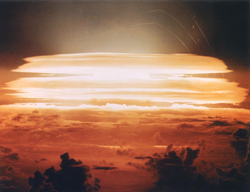 Vijayanagara: A city of Babkhan foundation, ironically met its demise at the instigation of the Raspur Pact. 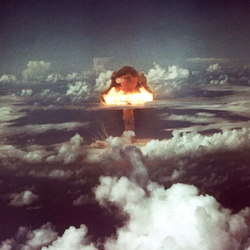 Kingsgate: A vital logistical and industrial hub sustaining the Pact's forces on the Wintergleam Front, Kingsgate's fate was sealed when the rebels chose it as a target for a retaliatory counterstrike. 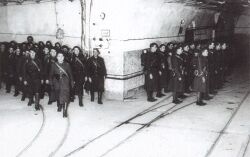 Kalgachi mobilisation saw its vast subterranean network of fortifications and deep bunkers reactivated as the Garden's ancient doctrine of being an entire nation under arms was once more tested. 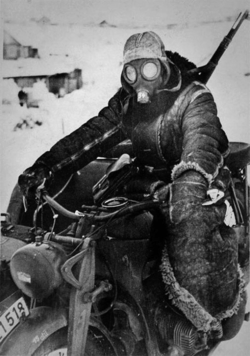 To further compound the heaped misfortunes, the Scouring coincided with the onset of the harshest Benacian winter in living memory.

With those rebel forces still capable of organised unit level actions disengaging and moving off towards the designated evacuation ports, the armies of the UDF, directed by Benacia Command, began a cautious pursuit. By now the remaining Pact air forces committed to the conflict, following the withdrawal of Florian, Ransenari, and Sanaman contingents, enjoyed a free rein over the entirety of the theatre of operations and bombed and strafed the retreating columns of soldiers, along with the refugees who now clogged the majority of roads northwards, with a generous liberality. Although skirmishing continued, particularly in those locations where the rebel rear-guard formations turned about to check the probing advance of the UDF's vanguard armoured scouts, the Pact forces were primarily focused on securing the surviving major population centres of the north. Wherever resistance was encountered, whether from a cut-off SDF formation or from the Home Guard militia of some foolhardy minor bailiwick where the generous terms of capitulation had been refused, the UDF sought to by-pass the defenders, leaving the recalcitrant to be encircled and liquidated by the mobilised regiments of the Elwynnese Landstorm who now followed in their wake.

For Benacia Command, following the atomic immolation of both the loyalist and the separatist administrations during the nightmarish days of the Scouring, there was no longer a viable administration with whom to conclude an armistice, nor indeed a reliable and functioning native administration to install in its place. Instead the obligation was to now set upon it to create a formal occupation government - a duty which fell to the Political Directorate, already well versed in the administration of the Unified Governorates of Benacia. By dint of Ardashirshahr being spared the destruction visited upon Islus and Kingsgate through a fortuitous ballistic missile interception, the pool of native collaborators who Benacia Command could call upon to flesh-out the new administration had, out of necessity, a distinctly Babkhi tint.

The shipborne evacuations, where only those organised and conducted by the Red Orchid Society were immunised against attacks by the air and maritime forces of the UDF, continued throughout 1696 AN for so long as the major northern ports remained, however tenuously, under rebel control. One by one these were placed under siege and snuffed out; their exhausted garrisons being ritualistically slaughtered and any civilians found within who had not fled in time being led away in chains on the first step of the long forced marches that would lead them southwards, ever southwards, towards an uncertain fate. No reliable figures exist but the best estimates are that 600,000 civilians were evacuated from Northern Elwynn under the official Red Orchid Society programme whilst up to a further million fled via unsanctioned sailings, with it being entirely uncertain how many of those eventually survived to find sanctuary on the East Barrow Island, Cimmeria, or Raikoth.

Whilst a formal peace was naturally impossible to conclude, it being both ideologically contrary to the Humanist ideology of the regime taking shape in Ardashirshahr and conceptually abhorrent to the irreconcilable "Free Elwynnese" survivors who had gathered in Wolfraven, the eradication of the last of the evacuation ports marked a natural termination point for the conflict. The last of these, Caligae, was captured by a combined arms assault that was conducted by the Szodanin-Uihmanz of the Black Legions as an extermination action. From this last battle of the war, pointedly, no rebel survivors, be they SDF, Home Guard, or civilian, emerged alive. It was an appropriately sanguinary note for the overly long, bitterly contested, and exceptionally brutal conflict to finally conclude - leaving Elwynn facing an uncertain future and the economic and material prospects of the entire continent of Benacia at their lowest ebb since the Kalirion Fracture twenty-five years before.

Control of access to food rations was one of the means by which the Union Defence Force enforced the semblance of authority over the newly recaptured territories. Bailiwicks in which partisan attacks and brigandry were reported could face the prospect of food embargoes lasting for a week, a fortnight, or a month, depending upon the UDF bailiwick-commandant's assessment of the severity of the transgression. In especially serious instances of defiance, the withholding of state mandated rations could be supplemented by a total prohibition of food imports into a bailiwick and policing actions by the Elwynnese Landstorm aimed at confiscating foodstuffs from farms and warehouses in the area under interdict. Within a bailiwick subject to such a stoppage, provision would only be made for those citizens who had taken up roles in the service of the UDF, the Honourable Company, or the N&H. It swiftly proved expedient and necessary to remove cooperative citizens from their communities into adjacent fortified cantonments to ensure their safety against the reprisals of their erstwhile neighbours.

Decided on the margins of the Congress of Chryse, the post-war Babkhi-dominated government of Elwynn determined that its foremost goal in reconstruction would be the removal or destruction of all industrial plants and equipment that would have any conceivable use in any future rebellion by the Elw or Amokolian peoples. Steel production was immediately outlawed in the former autonomous republics of Amokolia and Upper Elwynn and the Union Defence Force instructed to mobilise local corvée labour to support industrial disarmament. All industrial plants and equipment not destroyed by military action was to be completely dismantled and removed from the capitulated territories, or else destroyed in situ if removal was impossible. A proposal to demolish, through controlled demolitions, the mines of Amokolia and Upper Elwynn was entertained but eventually dismissed. The former rebel territories would instead be resource extraction zones, with refining processes and manufacturing would take place in the autonomous republics which had remained loyal during the conflict. Light industries, without an identifiable dual military purpose, would be permitted in an unconsolidated form at the level of the bailiwick, for the purpose of facilitating reparation payments. Economic enterprises, with preference given to those focused on activities that would facilitate reconstruction and reparation payments, would be permitted by the UDF bailiwick-commandant on a case by case basis.

The bailiwicks of Amokolia and Upper Elwynn faced a double indemnity, not only to cover the repayment to Benacia Command of the costs it had incurred in sustaining the war to reconquer the north, and its subsequent occupation, but also to make reparations to Alalehzamin and the Sovereign Confederation for the destruction of three major urban bailiwicks during the rebel counterstrike on the day of the Scouring. Naturally there would be no funding available for the four northern population centres obliterated during the initial orbital bombardment, nor for the other cities which had been subjected to conventional aerial bombardment during the war. Reconstruction was only funded to the extent that the infrastructure restored would facilitate the payment of reparations, and the cost of the reconstruction work itself would be added to the total reparations bill.

The burden of reparation payments was initially divided equally between each bailiwick, irrespective of size and ability to pay. Eventually exactions were scaled to taking forty-percent of a bailiwick's pre-war economic output.

Following the Scouring, the Praetor chose to merely issue a statement calling the event an abhorrent event and a blight on human history, wishing it never be repeated again. However, he also kept his silence on the matter at-large, instead leaving his various ministers to craft a more nuanced response that allowed the Praetorian Expeditionary Force unit stationed in the country to fully turn to a humanitarian arm of the Hexarchy's military in the wake of the disaster.