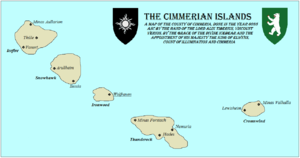 Cimmeria is a group of islands in the strait between Hyperborea and Continental Elwynn. The islands are, from west to east, Icefire, Snowhawk, Ironwood (also known as Wolfraven after the city that covers most of the island), Thunderrock, and Cromswind.

The entire island group forms, since 1696, one of the two counties of Elwynn under the jurisdiction of the Free Elwynnese Republic. Population 436,189 (pre-war, after war???).

The Cimmerian islands are a rather desolate and harsh part of Northern Elwynn. Although the climate is rather unforgiving, the islands do have an interesting culture and are a hub of economic activity. The main export products of Cimmeria are questionable booze and religious cults with an inclination towards seperatism.

Cimmeria has a long and convoluted history. It was originally an independent country in the 1450s, later joined the Hegemony of Alexandros, and eventually ended up in Shireroth.

A cultural of the early 1500s Cimmeria is found in the famous book Unaimed Arrow, where it was cast in an unsympathetic light as a frozen swampland full of unfriendly people.

The Battle of Cimmeria, took place there. The Battle of Wolfraven, in which forces loyal to Kaiser Los II sunk the Yardistani battleship Inevitably Destructive In All Circumstances also took place in the island's capital. The Khan of Vijayanagara has used Cimmeria to test weapons, to little lasting damaging effect.

Being a forgotten county with a tendency for superstition and isolation, it wasn't much of a surprise when an extremist and violent cult, known as the Icebear church, gained prominence in the barbaric regions of the North. Although the power of the Holy Church grew slowly over the first decades, in the early 17th century, the ideology of the Church expanded rapidly. The Church began to take over the government of Cimmeria and proclaimed independence as the Theocracy of Elwynn. This eventually lead to the Icebear Rebellion, during which the Imperial Government quickly ended the aspirations of the Church.

After the rebellion, the Prince of Elwynn named Jacob Darylion-Verion, a member of the prominent Elfinshi noble House of Verion as Count of Cimmeria. Jacob created a new system for the Elwynnese subdivisions, with Cimmeria and Illumination being part of the Lands of Kiladôr. The rule of the Verions was a time of stability for the County. Under Jacob's son, Alix Verion, the county of Illumination and Cimmeria saw a return to the ancient Barbaric culture and traditions, that had a great appeal to the young Count.

Following the exile of the Verion family in 1635, the Storish woman Geirbjörg Gefialdrsdottir was named Countess. The ancient symbols of Illumination and Cimmeria were quickly changed, but with that, the cultural hegemony and ancient traditions of the county declined. Albeit protests from the former Prince of Elwynn, and the descendants of the Verion counts, the King of Elwynn continued to support the cultural revolution that had taken part in the County. The inevitable result was the stagnation of the public administration and a severe decline in the prosperity and vibrancy of the civil society. The reign of Geirbjörg was marked by emigrations in silent protest at the Storish regime.

After the Auspicious Occasion the Cimmerians rose up against their oppressors and proved more efficient than most in ridding their islands of the vestiges of foreign occupation. Once the blood had been cleaned from the pavements in Wolfraven and Port Illumination an invitation was sent to the court of Layla Verion, Ethnarch of Crowsilver, to invite the ancient house to resume its rule. To them she sent her daughter Eki, and a vast retinue of Crowsilver brigands, to rule as countess and effect a reformation of the County, returning it to the pure path of the Divine Icebear.

In recent years, Cimmeria has gained notoriety for being home to strange militaristic cults and independence movements, such as the Icebear Cult. Cimmeria was one of the main battlefields in the Icebear Rebellion, during which members of the Holy Church proclaimed Elwynn a theocracy.

After the Second Elwynnese Civil War had concluded in 1696, Cimmeria found itself the main area of the new state entity Free Elwynnese Republic.