Hyperborea is the archipelago of two polar islands to the northeast of Benacia and the west of Fifth Isle and Apollonia. The larger of the two islands is called Bifrost (or usually just Hyperborea), and the smaller is Volsung. Is is currently one of the two Counties of the Elwynnese Republic as the County of Hyperborea.

Four large waterways (probably fjords, but the map provides no means of distinguishing them from rivers) cut through the periphery of the main island. In its center is Mt. Yaanek (3050 m), an active volcano considered sacred by the inhabitants. Other mountains include Mt. Pirumve, Mt. Aramve, and Mt. Dragumve (English: Holiness, Goodness, and Silence).

Most of the big island is covered in ice, but a small area of the southeast and most of the eastern coast are habitable. The small island has the archipelago's only permanently ice-free harbor, Tyrgaard. The strait between the two islands usually freezes in the winter and melts in the summer. 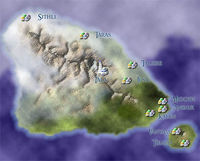 Terrain and cities of Hyperborea

Hyperborea was home to the civilization of Raikoth that was its own County within Elwynn. Currently, Raikothin people still live on the island, notably within the Bailiwick of the Raikothin Autonomous Region.