Traditionally the overwhelming majority of people on the island spoke the Florencian language, a language which, along with Gaian (Tellian) and Cisamarrese, is a member of the Machiavellian family of languages. As these languages are prohibited the majority of the population, approximately 66%, was, as of the 1704 Assize of Florencia, deprived of subject rights and recategorised as "Protected Persons". As noted, 34% of the population, mostly resident in Capitolia and along the northern coast, are sufficiently proficient in an official language of the Benacian Union (mostly Istvanistani or Praeta) to qualify for subject status and thereby for advancement through the Table of Grades and Ranks of the Benacian Union.

The efforts of the Survey Missions dispatched into the interior by the Governor are presently being hampered by partisan activity. A comprehensive report is expected at some point during 1705 AN.

The records of previous eras were not especially well maintained by the former government of the United Isles, compounding an already lax attitude manifested by the old feudal lords of the island predating the Kalirion Fracture. The public records office, such as it was, received a certain amount of damage during the course of the liberation of the island from the United Isles separatists and the assistance of the Benacian Academy has been requested so as to sift the fragmentary scraps of parchment and folio paper that survived the conflagration. Similarly a number of museums were ransacked by looters during the liberation of the native population from the tyranny of self-rule. An amnesty has been offered to any amongst the native population who voluntarily returns any of the stolen artefacts that have, by some mischance, come into their possession. At the same time officers of the Black Legions stationed on the island during the 1680's and 90's have been discretely contacted so that any objects taken as prize trophies which might not have been recorded in the officially recorded spoils of victory owing to administrative oversight, might be properly evaluated and catalogued.

Overall the present study of the history of Florencia in the era prior to the Kalirion Fracture is presently quite unsatisfactory. A number of suspected antiquarians have been detained, along with a considerable company of għannejja (singers of ancestral folk songs) taken from the interior upland regions. They are presently, as of late 1704 AN, being held in the Castello Dei Miseranda which is situated in the Bailiwick of Saena. Upon the arrival of the requested academician it may be possible to commence their interrogation and thereby to pull together the narrative threads of the island's presently threadbare history.

Since 24.V.1704 AN the Governor of the island has been the Frainan Uihmanzis Heinz Raeder, the former commissioner of Jadid Khaz Modan, who surrendered his command to Lors Bakker-Kalirion following the Peace of Lapano.

Florencia falls within the area of operations of the Southern Banner Group of Benacia Command. Formations garrisoned on the island, both Benacian Union aligned as well as allied, fall under the operational command and control of the 19th Army, commanded as of 1704 AN by the Frainan Hohmin Rikard Lange. As the Officer Commanding the Southern Banner Group is the Frainan Streïakeï Lors Bakker-Kalirion, the self-same commissioner for the circuit of Jadid Khaz Modan, the island's garrison can also be considered to enjoy the benefit of expedited reinforcements in the event of an emergency, most likely in the form of a contingent from the Jaysh al-Sathrati.

Capitolia hosts the Salb XXXV (35th Legion) of the Benacian Union Defence Forces. The legion recruits in the Governorate of Lower Lywall so as to ensure that personnel assigned to the legion have no affinity in culture or shared ancestry with the native population of the island. The legion itself consists of three motorised infantry regiments and their support elements, amounting to a total force of slightly over 7,200 legionaries on paper, allowing for the usual manpower fluctuations that will often cause the subordinate units of the legion to be below their established nominal strength.

As of 1704 AN the legion was commanded by the Salbnan Odissey Maksimov, a Mishalanese native rewarded with promotion to this position for his keeping the Elwynnese regiment under his command loyal to the cause during a wave of mutinies that occurred on the Amokolian front after the nuclear Scouring of northern Benacia broke the stalemate in the Second Elwynnese Civil War.

The State Guard of the UGB on the island, as well as the retinues of the magisters-carnifex assigned at the bailiwick level are also available to support the legion as auxiliaries for operations conducted on the island. Similarly the legion is available to render aid to the forces of the Governor and the municipal corporations in the event of an emergency such as a temporary or localised breakdown in public order or a natural or humanitarian catastrophe.

The Bay of Capitolia serves as the primary anchorage of the 1st Submarine Division, attached to the Khaz Modani Fleet but primarily tasked with conducting sorties into the Great Western Sea. Additionally the port of Buccisi, facing towards the Cisamarraese and Sanaman-held mainland, hosts the primary station of the Coastal & Littoral Defence Establishment.

Retinues of the Worshipful Guild of the Sacred Carnifices

Each carnifex of tribunal rank, appointed by the Worshipful Guild of the Sacred Carnifices to administer to the bailiwicks of Florencia the tender mercies required to uphold the Union Covenant, is obliged to maintain a retinue for the purpose of his work. By virtue of the vocation, this retinue must necessarily be armed and organised so as to impose itself upon a restive and frequently resistant populace. The magisters enjoy considerable autonomy, on account of their station, when it comes to the organisation of these retinues but they are capped in size at being permitted to be no larger in size than a troop (forty men under arms).

The Corps of Invalids, comprising those maimed or else honourably discharged from the Black Legions at the maximum age of retirement for the force, were resettled along with their families on Florencia in the years after the island's reoccupation. Those amongst them who were assessed to be sufficiently physically fit as to serve as garrison troops were recalled to arms to serve as static defence regiments, initially assigned to the coastal defence arm of the Maritime Forces of the Black Legions. With the creation of the Benacian Union Defence Force responsibility for the Corps of Invalids was transferred to the Civil Executive of the Unified Governorates of Benacia and the invalids eligible for reenlistment, or their sons where these were available, were recruited into the State Guard of the UGB.

In 1707 AN the remaining state guard forces of the Governorate were stood down and enrolled into the Corps of the Gentlemen-at-Cudgels. 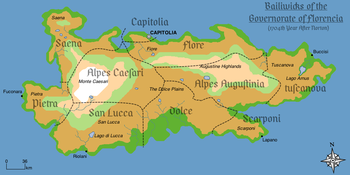 Administrative subdivisions of the Governorate of Florencia, as defined in the year 1704 AN.

With the exception of the metropolitan bailiwick of Capitolia, founded after the liquidation of the United Isles in the modern era, the subdivisions of Florencia have ancient origins and largely unchanged boundaries. Whilst the imposition of guild corporate rule in the bailiwicks is an innovation that only truly took root with the formation of the Benacian Union the division of the island into communal territories with their own distinct and particularistic identities is a long-standing one.

Fiore, Florencian for “flower”, is the oldest region of Florencia and dates back to the first settlements established by pioneers from So Sara. When the Sarans arrived they found a landscape covered in flowers, and thus named the island Florin Sara (later corrupted to Florencia). The region around Capitolia became known as Florie, and like the mutation of Florin Sara, became Fiore. To this day Fiore has a sizable industry selling cut flowers that are shipped around the world, and flower farms still dot the hillsides.

As the Florin Sarans began to develop their own culture, the Sarans language split into Florencian on the island, while Sarein was still spoken in So Sara. It was from Capitolia and Fiore that the rest of Florencia was settled; not always peacefully. In 1477 AN a group of dissident Fioreans left Capitolia and founded the rival city of Montaperti in Saena – two groups that were destined to come to arms at later dates.

The Fiore of today is a much more open and respectful region than it was in the late 1400s. During the 1500s the island was divided into numerous fiefdoms ruled by petty nobles. By 1500 AN the Boomist Church had fallen out of favor in lieu of Cedrism, but the division was hardly a clean cut, and the island experienced a hundred years of internal fighting between Cedrists and Boomists. The 1600s saw a Florencian renaissance as arts and science were patronized, and religious fighting finally settled down. Over the course of the next century Fiore, and all of Florencia, would slowly progress, modernization fighting against a stubbornly traditional people.

Yet religious differences are no longer hostile. Cedrists, Boomists and followers of a dozen other religions mingle side-by-side. Churches and temples abound, and the bucolic scenery is enticing to locals and travelers alike. Famous sites include the Palazzo Vecchio, or Old Palace, built around 1489 and still used by the Count. The city skyline’s most famous icon is the Cattedrale di Santa Gregorius, or the Cathedral of Saint Gregory. Also of interest is the Giardini di Dio, or Garden of the Gods, an 11-acre sculpture garden featuring sculptures of many Cedrist and Boomist deities.

Outside the city, the Fiorean countryside tends to be rural and picturesque, with farms and villas dotting the landscape. Many small villages exist throughout the country, with only a few large cities. The cities serve as the main commercial and industrial hubs of Fiore, providing urban amenities such as hospitals and airports. Education, however, is still decentralized and there exist many small elementary schools. The University of Florencia provided college-level education, although many people also choose to study at larger campuses, such as the Benacian Academy and Metzler University.

The city of Montaperti, founded in 1287, marked the establishment of Saena. Situated on the Saena Peninsula, the area provided isolation from Fiore for the ailing Boomist Church. Comprised mostly of Yardistani descendants, the Saenans were able to keep their anarchist tendencies to themselves and established Montaperti on a hill overlooking the center of the peninsula. The site offered ample defense and a fertile landscape. Its people prospered and soon spread out, expanding the boundaries of Saena until it became on of the most powerful regions of Florencia.

During the tumultuous religious conflicts of the 1500s, the Saenans warred with the Fioreans and fought many bloody battles before finally exhausting each other and declaring peace. Religious fervor subsided during the Florencian Renaissance, allowing the arts to flourish. During this time Saenan muscians became especially popular, travelling to Benacia to entertain in courts and teach at music schools.

Like Fiore, Saena has been slow to modernize, its people rooted deep in their traditions. The area is much less metropolitan than Fiore, with a large population spread out over the region. Montaperti nonetheless features a beautiful skyline popular among tourists. The region is also known for its bucolic coastal villages, resplendent with old castles, colorful houses, and breathtaking beaches. Saenans are also said to make the best pasta sauce in Florencia, and the region is the top grower of tomatoes. Each years Saenans gather in Montaperti's central square to celebrate the Fiesta de la Boom.