Worshipful Guild of the Sacred Carnifices

The Worshipful Guild of the Sacred Carnifices is a civic and religious fraternity of magistrates and executioners, with the typical carnifex-magister being trained and empowered to perform both roles, established under the terms of the Edict for the Restoration of Justice and Order promulgated by the Congress of Chryse in 10.XIII.1698 AN.

The Second Elwynnese Civil War of 1692 AN to 1696 AN, which culminated in the Scouring, a limited nuclear exchange which had destroyed a heretical liberal rebellion in Amokolia and Upper Elwynn at the cost of seven cities, had fundamentally interrupted the operation of the economy and civil society throughout central, northern, and eastern Benacia. Outrage at the use of orbital bombardments, anti-matter devices, and thermonuclear warheads, had triggered a rash of insurgencies, rural uprisings and urban protests, which were quashed by the Black Legions and the Elwynnese Landstorm only with great difficulty. More insidiously, the despair engendered by the use of weapons of mass destruction, combined with the near universal disruption of agriculture, trade, and tenuous supply chains, to say nothing of the abrupt demobilisation of millions of former UDF and rebel servicemen, produced a malaise that hung over the lands of the future Benacian Union. Corruption, depravity, and lawlessness, had seemingly taken root in almost every bailiwick. Even in victorious Alalehzamin and the Unified Governorates there were to be found knots of individuals drawn to the heretical conclusion that the price paid for victory had been one not worth the paying.

To combat this societal decay, the Congress of Chryse concluded that a severe and exemplary punishment must be laid upon the populace - to either restore them to obedience or to more swiftly bring about their lasting extermination and replacement by a more godly and humble body of subjects, versed in Holodomatic Cedrozurvanism and the principles of Humanism. 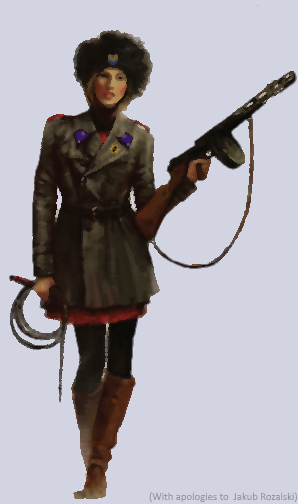 A uniformed tribune of the Worshipful Guild of the Sacred Carnifices.

A carnifex is to take his seat in the Bailiwick to which he has been assigned, and tasked to exercise the power of life and death in judgement over every living soul resident there.

Every bailiwick or equivalent subdivision within the territories governed by the Congress of Chryse, in their capacity as victors in the Second Elwynnese Civil War (Chryse, Elluenuueq, the Sovereign Confederation, and the Unified Governorates) will receive a tribune of the Worshipful Guild of the Sacred Carnifices. Within the bounds of that bailiwick their authority is absolute, subject only to those appointed over them for the policing of their own souls, who enjoy an authority as absolute as that the carnifex enjoys over the subjects within his jurisdiction.

The Worshipful Guild of the Sacred Carnifices, subject to the authority of the Lord High Censor appointed by the Congress of Chryse is organised to provide for a governing college of magisters, with a magister appointed to correspond to each of the Governorates of the Benacian Union. In subordination to each magister should then be a legatine college, consisting of four carnifices of legatine rank corresponding to each of the four cardinal directions, representing the roughly equal territorial portions into which the governorate in the care of the magister has been divided for the allocation of duties to the worshipful guild. The legatine carnifices in turn have care over the college formed of the carnifices of the tribunal rank who have each been assigned a bailiwick. Every tribune of the carnifex shall be obliged to maintain in their retinue eight squires taken from the temples where they have been initiated into the sacred mysteries as Vicars of the High Gods and inducted into the regional cadres of the Nationalist & Humanist Party. From these squires suitable candidates for elevation to the rank of tribune are chosen. Promotion being decided upon the basis of close examination and trial by ordeal rather than through seniority of service.

Tribunes, Legates, and Magisters of the Worshipful Guild of the Sacred Carnifices are expected to maintain retinues appropriate to their rank after the Shirerithian fashion:

The households and retinues of officers of the Worshipful Guild of the Sacred Carnifices are subject to the rule of discipline, namely, to abstain from eating, drinking, or keeping company with anyone who was not a member of the worshipful guild. Should a member breach these rules, both himself and the other person would be executed.