The Benacian Academy, established by Edict of the Congress of Chryse in 1699 AN, is the sole accredited academic institution of the Benacian Union to which all liveried companies chartered by the Guild of Academicians must necessarily be subordinated and accredited.

Resident in Chryse, the Lord High Rector of the Benacian Academy has his seat and court established in halls of the suppressed Royal University of Chryse, and exercises the power of dominion over all academic institutions, liveried companies, and students under rule of the Academy.

Colleges, licenced places where higher forms of learning may be pursued, are established in Chryse, Merensk, and Sansabury, where studies may be pursued without the supervision of the Guild of Magisters-Carnifex. These institutions are headed by Rectors who owe their offices and obedience to the Lord High Rector. Their duties encompass the maintenance of academic standards, the suppression of subversive tendencies, and the eradication of heresy.

In additionally the Academy is responsible for the administration of the preparatory gymnasia, established in the bailiwicks of Elwynn and the Unified Governorates of Benacia. 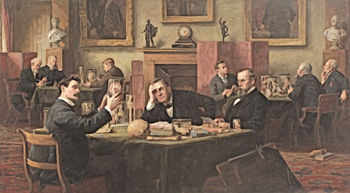 Recusciant prisoners examined in the Chamber of the Anatomists, oil on canvas, painted 1707 AN.

Security at the Academy is provided by the Guild of Academicians, which ensures the safety of students and faculty.

The security services and militia organised by the Guild of Academicians, known as the Academy Guard, are essential for the protection of the Benacian Academy and its satellite facilities. These services are provided by highly trained and dedicated individuals who are committed to safeguarding the Academy and its students.

The Academy Guard maintains a well-equipped and well-trained militia that is responsible for defending the Academy and its satellite facilities from any external threats. The militia is made up of both male and female members, who are skilled in the use of a variety of weapons and tactics. They are also trained in close combat, hand-to-hand combat, and other forms of martial arts, allowing them to effectively defend the Academy against any potential attackers.

In addition to its militia, the Academy Guard also employs a team of security guards who are responsible for patrolling the grounds of the Academy and its satellite facilities. These guards are equipped with advanced security technology, such as surveillance cameras and motion detectors, which allow them to monitor the premises and detect any potential threats. They are also trained in conflict resolution and de-escalation techniques, which enable them to handle any potential threats in a calm and controlled manner.

The Academy Guard also has a network of informants and spies who operate within the Academy and its satellite facilities. These individuals are tasked with gathering intelligence on any potential threats and providing the Guild with the information it needs to take appropriate action. They are highly skilled at covert operations and are able to gather intelligence without being detected by their targets.

The 1,200 members of the uniformed militia are responsible for defending the Academy and its satellite institutions from external threats, such as attackers or hostile forces. The 360 security specialists, on the other hand, are responsible for patrolling the grounds of the Academy and its satellite institutions, as well as for providing security for key buildings and facilities.

Together, these two groups provide a strong and effective security presence that would be capable of protecting the Academy and its students from any potential threats. The combination of the uniformed militia and the security specialists provides a well-rounded security force equipped to handle a wide range of potential threats.

The student body at the Academy is diverse, with students from all over the Benacian Union and beyond. The faculty staff at the Academy consists of experts in their respective fields, many of whom have been recognized for their contributions to academia.

The current Rector of the Academy is Henry Royston Merrick.

The Academy has colleges located in Chryse, Merensk, and Sansabury, where higher forms of learning can be pursued without the supervision of the Guild of Magisters-Carnifex. These institutions are headed by Rectors who answer to the Lord High Rector. Their duties include maintaining academic standards, suppressing subversive tendencies, and eradicating heresy.

In addition to its colleges, the Academy also oversees the administration of preparatory gymnasia in the bailiwicks of Elwynn and the Unified Governorates of Benacia.

The Academy also has chartered and autonomous bodies, such as the Auxiliary Servicewomen's Academy, the Elwynnese Campus, the Ransenari Campus, the Sovereign Campus, and the Gubernatorial Campus. These institutions offer specialised education in fields such as engineering, labour studies, physical culture, and oceanography.