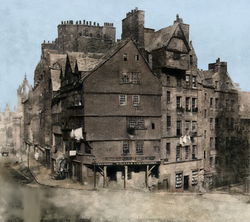 The Minarborian core of Sansabury is itself a relic of a bygone age. Nowadays the city is a popular tourist venue for Benacians getting away from the congested modernity of Merensk, Ketherist pilgrims from Kalgachia visiting the way stations of their diaspora away from the Old Imperium, and the mysterious cowed acolytes of the entity known only as Mondo, whose business in the city remains less widely known. 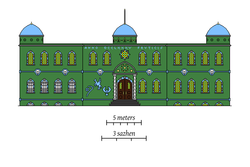 The frontage of the Ouroboros Club, former meeting place of the Minarborian elite and a typical example of Sansabury's architecture. An outbreak of disco on its basement dance floor was subsequently recognised by historians as the 'point of no return' in Minarboria's demise - striking down the empire's most senior cleric with an incurable case of Thanksday Night Fever and precipitating the collapse of the Minarborian church, taking with it all hope of government continuity after the demise of the undead ruling class.

Sansabury, located in the Governorate of Upper Lywall was formerly the capital of the Minarborian Empire, and is a city with a rich and varied history. Colloquially known as the Shrubbery for its beautifully overgrown central government complexes, Sansabury is notable for its intricate and arcane architecture built during its reign as capitol. Sansabury served as the seat of the Lich Empress and her Necrarchs, and was reputedly the residence of their deity, Minarbor Himself. The city is situated on a large, shallow mound within a meander of the River Lichovina, making it a geographically strategic location. The presence of the Lywall, a long system of fortifications extending from the western extremity of the protectorate at Klymhigh, speaks to an enduring legacy as an important military and political center.

In more recent history, Sansabury has served as the seat of government for the State of Lywall, a protectorate of Shireroth, and is now the citadel and fortified cantonment of the Central Banner Group of Benacia Command. From here, the Governorate of Upper Lywall is ruled on behalf of the Unified Governorates of Benacia. The city's adjacent aerodrome is also a key hub for the Aviation Forces of the Black Legions, further highlighting its military significance.

Despite its tumultuous past, Sansabury is also known for its cultural and academic institutions. The city is noted for its legacy Minarborian architecture, which serves as a reminder of its rich cultural heritage. It is also home to numerous academic institutions, making it an important center for learning and intellectual development. In addition to these cultural and academic offerings, Sansabury also boasts a thriving local economy, as evidenced by its status as the home of Schleps Gin, a jolly-inducing delicacy known throughout the Benacian Union.

Sansabury lies a little west of the ruins of the Ashkenatzan city of Mikrashot, which were much pillaged for the contruction of Sansabury although certain features have been preserved as antiquities. The river Lichovina seperates the two areas, that were once linked by a single bridge constructed for easy defensive demolition in the Lichbrookian fashion. Beside the demolished bridge can be viewed the remains of two, no less ruined, pontoon bridges, one Kalgachi from the fleeting occupation, the other Shirerithian laid down by the Corps of Auxiliaries and promptly demolished by a suicide attack launched by the remaining living followers of the Black Regiment of Mors Nerrolar, whom they had for some inexplicable reason come to venerate in his long absence. A slightly more robust, albeit cratered, bridge allowed access to Sansabury from the south, and the road to the north generally kept to the west bank of the old Lichovina. These three points of access are the only public means to enter Sansabury, and traffic through them was formerly screened to a certain degree by the Lichniks, the Reapers and other watchful authorities of the Minarborian state - their place now being taken by Public Order Troops assigned from the Corps of Auxiliaries (what they lack in competence they make up for with zeal in the application of their cudgels).