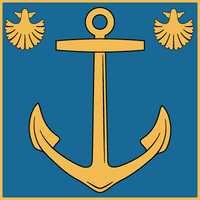 Banner of the Navy of Ransenar.

Following the establishment of the Kingdom of Ransenar in 1673 AN, the newly founded Kingdom was without the semblance of a fleet until the following year when assets began to be transferred across by the Benacia Command of the Raspur Pact subsequent to Ransenar's accession to the Pact. Originally intended for local defence, became increasingly responsible for defense of the region in light of the rise of the Iron Company in Elsenar and the threats of the Revolutionary Army of Crisco.

As of 1674 AN, the Navy comprised just over 10,000 regular (full-time) personnel in the process of completing their training at Marinestation Aureate (Goldshire Hamlet), a facility established in that same year by the Black Legions Military Assistance Mission, and just over 8,210 reserve (part-time) personnel drawn from Ransenar's experienced maritime community. The Navy of Ransenar consisted of 20 commissioned vessels, 3 non-commissioned vessels, and over 10,000 personnel.

The Navy of Elsenar became a naval force that was designed to operate in its nation's littoral zones whilst it maintained the competency to operate in the open oceans of the surrounding region.

The Navy of Ransenar operated a fleet consisting of vessels directly transferred from the Eastern Banner Group of Benacia Command comprising of coastal patrol boats (9), logistic support vessels (5), corvettes (4), off-shore patrol vessels (4), cargo vessels (3) and a Type 2400 u-boat. Plans to procure an additional dozen destroyers and frigates from Natopian shipyards were set before the comptrollers of the Allied Production Matrix for consideration. Following approval assault ships (5), logistic support vessels (5), and destroyers (10) were received in late 1676 and mustered at anchor the harbour of Zolt. The Navy also received diesel submarines (6) from the Port Niyi Shipyards.

With the arrival of these new vessels the Protector-class offshore patrol vessels transferred in 1675 were returned to Benacia Command.