The Trans-Euran Command is a Constancian-led continental theatre command established by the SANE alliance of Constancia, Natopia, Shireroth and, formerly, the Empire of the Alexandrians. A multinational force, it is commanded by the Marshal of the Imperial Constancian Armed Forces, who was in turn given the concurrent Imperial Republic rank of Magister-Generalissimus, a special rank reserved only for the senior most Shirerithian Imperial Army officer in theatre.

The main theatre-level formation available to the Trans-Euran Command, the Euranikon Omáda Lávaron (Euran Banner Group) is formed from units contributed by the Imperial Constancian Armed Forces and the Euran Expeditionary Forces formed overwhelmingly of Shirerithian auxiliaries with some naval and air force personnel attached. Although the Natopian contribution was comparatively small, they nonetheless provided personnel for crucial niche roles in the merchant fleet, responsible for keeping the Constancian cities in the Gulf of Aqaba fed, and the aerospace forces, as well as in sustaining certain niche high-tech capabilities beyond the skill of native Euran forces to maintain.

As the largest contributing force, in terms of headcount, the Imperial Constancian Armed Forces provides the commander-in-chief for the Trans-Euran Command and exercises command and control over allied forces deployed in theatre. Owing however to the degraded condition of the industrial base of Constancia, and the limited capacity of its economy, the Trans-Euran Command has remained heavily reliant upon material support delivered via the allocations system of the Allied Production Matrix.

The organisational structure of the Trans-Euran Command is based around formations assigned from and led by the Imperial Constantinian Armed Forces (ICAF), with Aldurian units beginning to integrate into a combined command structure from 1681 AN onwards. 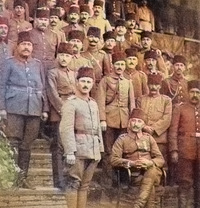 The Chief of Staff, his directors, and their staff, photographed at Astérapolis (1670 AN).