Military of the Suren Confederacy

One interesting aspect with the Surenids, first attested during the Second Euran War, was their disinclination to hold captives as prisoners of war for an extended period of time. Excepting those sent back for further interrogation by the gendarmes, those branded for the attention of the judicial authorities, or those summarily executed at the discretion of the commander of the local forces, captives taken by the Surenid forces would be released and sent back towards their own lines at the earliest opportunity. The macabre detail to note however is that those released in this manner would first be subjected to the amputation of their right hand and left foot. The bloody stumps resulting from these operations being cauterised by the heated blade of a knife, followed by the application of a coat of tar mixed with sand. Those wishing to avoid being released from captivity in this fashion were obliged to accept the Surenshah's salt and enter into his service as kuls under a Life-Service Bond.

Long beset by equipment shortages, the Suren were almost pathetically grateful when in 1690 AN the agents of the State Gendarmerie were able to negotiate the seizure of the Krasnocorian arsenal formerly held in Port Ulje in return for offering the garrison there, marooned for five years since the collapse of their home country, generous cash payments, humanitarian relief supplies, and the opportunity to resettle in Surenid territory.

At the same time more concerted efforts were made to identify, catalogue and salvage repairable pieces of equipment left over from the Euran Wars. To this assemblage of arms was added a steady flow of military aid received from Constancia and New Alexandria under the Fontainebleau Accords and subsequently from Trans-Euran Command following the accession of the Confederacy to the Raspur Pact. The outbreak of the Third Euran War (1693 AN–1701 AN) would see further donations of equipment, particularly in the form of light attack aircraft for counter-insurgency operations, and the embedding of advisors from the Constancian Foreign Legion in the State Gendarmerie.

The breadth of the conflict with Zeed, encompassing guerrilla warface, counter-insurgency operations, and finally full-scale manoeuvre warfare, exceeded the capacity of the State Gendarmerie, even when reinforced by mobilised reserve elements of the Popular Levy. In spite of the Mobilisation Act of 1695 and the 1697 Impressment Act, the Surenids struggled to meet their manpower requirements, and indeed the bulk of the army that was eventually taken south into Zeedic territory after 1698 AN, following in the wake of a Constancian offensive which overwhelmed the Ḡur Republic, comprised of mercenaries, kul slave soldiers, and retainers taken from the Royal Court.

Following the surrender of Zeed in 1701 AN, the surviving armaments of the Revolutionary Armed Forces were transferred by Trans-Euran Command to the Suren Confederacy as part of the reparations owed by Zeed as the aggressor in the conflict.

Each year the Suren Confederacy mandated the recruitment of one percent of the working-age population into the so-called Popular Levy (Niru-ye Sāzmān-e Basij-e Suren) for a four year mobilisation period, representing a total force available under arms of approximately 216,416 men. Of the established strength of the Popular Levy therefore an eighth of the force will be in cantonments undergoing their basic training for six months, while a further eighth of the force will be out on the frontiers learning fieldcraft and patrolling for a further six months. At the completion of their training year the levies would be assigned to one of the fifteen Tips (Brigades) of the State Gendarmerie (Žāndārmirī-ye Dowlati) for two years of service as mounted-light infantry and auxiliary policemen, with troops in their third year of service being responsible for the further training and discipline of new inductees into the regiments of the tip. After two years in the Gendarmerie, the levies finish their period of mobilisation by being transferred to one of the depot regiments tasked with logistics or works duties in the run up to their demobilisation period.

All individuals who complete their initial mobilisation period with the Popular Levy are permitted to return to civilian, being permitted to keep their service rifle, a tent, a silver tea set gifted by the state, four camels from the herds of the paramount chiefs of their home province, and any captives they took while on active service. In spite of being permitted to return to civilian life these levies are retained by the government on the Active Reserve until their forty-fifth birthday whereupon they are transferred to the Inactive Reserve in which they would remain until their sixty-fifth birthday. The distinction between active and inactive reserves being in their assignment and the conditions under which they would be called up. While members of the active reserve might be made subject to a patriotic service mobilisation order at any time, subject to a decree by the Shahrbān of their home province in peace time, and typically be assigned to a mobile fighting formation, the inactive reserve would only be called upon by the central government in time of war with a foreign power and even then typically be only be assigned to a static infantry formation or to the depot regiments tasked with combat support services. To prepare for future war, the Popular Levies are frequently indoctrinated about the spiritual benefits of martyrdom.

The Naval Forces of the Popular Levy (Niru-ye Daryâyi-e Sāzmān-e Basij-e Suren) was established on 05.II.1688 AN with the formation of a brigade level Naval Command Unit, based at the port of Kara, and the procurement of thirteen surplus warships (four frigates and nine corvettes) from Sanama. Future expansion plans will revolve around similar procurements and the domestic production of auxiliary vessels and patrol craft. The doctrine of the naval forces focuses upon the defence of immediate coastal waters and the exclusive economic zone (EEZ) of the Confederacy through regular patrolling, the charting of the coastline and off-shore waters, and the preparation of a layered asymmetrical defence. The Naval Basic Training Centre was established at Kara, subordinate to the Naval Command Unit on 10.II.1688 while a Maritime Surveillance Centre was established at Bandar-e Zinjibar on 13.II.1688 to collate reports of shipping movements on the Gulf of Zinjibar received from the State Gendarmerie.

The Suren Hydrographic Service (SHS) was previously established on 19.I.1688 with the dispatch of a First Lieutenant (Setvan Yekom) of the Gendarmerie to the Trucial Islands of Chamrush with orders engage local labour to raise a lighthouse on the southern promontory of the main island within two years. The garrison commander of the island, Bektash Khan, was instructed by a firman of the Surenshah to provide a squadron of levy-infantry to support the SHS through overseeing the labour corvée for the building of the lighthouse and to assist in the collection of financial contributions from the emirs of the islands. 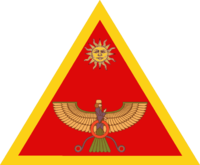 The Aerospace Forces of the Popular Levy (Niru-ye Havâfazây-e Sāzmān-e Basij-e Sureni), established on 08.X.1688, faced the invidious task of developing a tradition of aviation, and the logistical and technological capacity to support it from scratch. The Surenid rebels, then a part of the Azad Eura coalition - which would become the basis of the present confederacy, had passed through the Second Euran War without aircraft. The odd assortment of light aircraft and cargo planes assembled by the Suren under the guise of a civil aviation company (Havâpeymâye Shahrokh) having fallen into the hands of the Raspurids at the onset of the conflict between Azad Eura and Constancia. The doubtful status of relations between the Surenid and Constancia has played its part in delaying or inhibiting the operational aircraft and machine tools into the Confederacy after its formation, although a team of specialist advisors from Brightworks Mistra did make representations to the authorities in Surenshahr during the southern hemisphere winter of 1687.

The limitations of the Surenid industrial base, built around light manufacturing and the repurposing of recovered artefacts dating back to the Babkhan era, hindered the development of an indigenous aviation industry. In spite of this the Suren Central Manufacturing Organisation was able to perfect the design of the Type 1 Aero Engine, a reciprocating internal combustion engine with pistons in a radial configuration. This engine, produced on assembly lines in Surenshahr, was installed on two light aircraft types - the F-1 Homā, a metal tube frame and canvas biplane, and the F-2 Simurgh, a high-winged stressed metal monoplane with fixed landing gear - both produced by Suren Aviation Industries that formed the mainstay of the Aerospace Forces as it developed its initial cadre of pilots.

Of an entirely different order of magnitude to the light aircraft produced indigenously, both in terms of size and technological sophistication, was the vast Veliki 1 Transporter obtained from the defecting garrison of Port Ulje in 1690 AN. Presently parked on the runway at Kara Airfield, the only one in Surenid territory of sufficient length for the Veliki to have landed upon, the transporter and its internal workings is an object of study and curiosity for the country's aspiring aviation engineers.

Of the appreciable quantity of light aircraft and unmanned aerial reconnaissance vehicles accumulated during the Third Euran War the majority have been distributed evenly amongst the seven satrapan divisions, with the residue - including airframes placed into storage or assigned to training missions - held at Kara.