Northbloom is located on lowlands to the north of the Octavian Mountains which act as a barrier to moist and temperate weather systems from the Southern Benacian coast, resulting in a dry and cool climate. Northbloom's depth in the continental interior and exposure to the adjoining boreal wastes give it very cold and protracted winters; summers are brief and midge-infested.

Northbloom's topography extends from hill country in the southwest to flatter plains in the northeast, drained by shallow gravel-banked rivers. The landscape is dominated by arid prairie, broken by scrubland and occasional tracts of wild coniferous forest.

Like much of central Benacia, Northbloom spent its early history as a backwoods frontier territory of various thalassocratic powers and was consequently overlooked for development if populated at all. Its first notable contribution to civilisation was as part of Zaprogia, a federation of trading posts which would go on to become a junior partner in the creation of Ashkenatza. After this modest pinnacle, however, it reverted to the status of a landlocked border province and remained so until the collapse of the Ashkenatzan state in 1605 AN, after which its population was largely driven away by the harsh climate and the depredations of regional Kossars until a few itinerant hosts of the latter were all that remained. 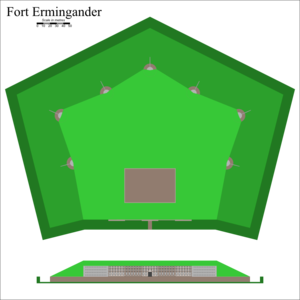 Some semblance of civilisation was restored in 1632 AN by a northward migration of the Minarborians whose undead Princess Royal, one Octavia Rossheim, claimed the area as the Principality of Highbloom. At the northernmost extent of this claim was established Fort Ermingander, a forward bastion against the lightning colonisation of the region by Shireroth whose government was then succumbing to the control of expansionist Froyalaners - that the Minarborians' fort was named for Thor's serpentine nemesis was an invocatory touch independently replicated by other entities at the time, arguably laying the occultic foundation for the subsequent Auspicious Occasion in 1651 AN. Although still a backwater under Minarborian rule, Highbloom's feudal society did produce some lasting innovations such as the Fischer-Preiss carbine and some of the territory's current institutions were established during this time, most notably its mounted militia which was first raised as the Northern Fontier Regiment.

These martial achievements would serve the population well when the Empire of Minarboria collapsed in 1652 AN; the population of Highbloom were second only to the emergent Kalgachi in retaining their social cohesion during this time. Whilst Kalgachia rallied to the guidance of the new Ketherist church and absorbed the southern half of Highbloom in the process, the population further north found their salvation in the form of one Mondo Etzeterra, the necromechanical spawn of Princess Octavia and one Clarence Etzettera, the Marquess of &zeter. The means by which Mondo escaped the necromantic breakdown that claimed his parents is unknown; some speculated a limited ability to tap into the same currents of global jollity that sustained Lord Toastypops although Mondo's state of animation was less consistent, doubtless degraded by the 'royal disease' of necromantic outages which afflicted his Rossheim bloodline and had ultimately doomed their Minarborian empire. Nonetheless, by 1660 AN Mondo had established himself within Fort Ermingander and his charitable works for the local population, particularly in the field of light engineering, gained a loyal cadre of supporters who saw fit to proclaim a sovereign state under his leadership.

The government at Fort Ermingander was initially viewed by its neighbours as little more than another example of the many cults and oddities which characterised the ungoverned territories of central Benacia at the time, but an increasing number of exotic radio signals emitted from Mondo's fortified workshop eventually drew the attention of Kalgachia and Shireroth alike; communication with Mondo was initiated by diplomats of both nations who by then were engaged in a struggle for influence over the post-Minarborian space, a struggle in which the vastly-larger Shireroth had tended to prevail. Northbloom, however, had not suffered the same traumatic collapse of societal norms that had afflicted the Minarborian south and was consequently less susceptible to Shirerithian overtures whereas Kalgachia, having emerged as de facto inheritor and guardian of the "Minarboreal civilisational space", obtained a more preferential ear.

In 1661 AN Mondo succumbed to another bout of necro-torpor and his devotees raised Fort Ermingander's drawbridge to shelter him during the ensuing dormancy. By 1664 AN the increasing vulnerability of Northbloom's territory to the hardline Nationalist-Humanist regime then controlling Shireroth, along with bands of Batavian voortrekkers who had infiltrated through Shireroth's porous border, impelled Kalgachia to launch a protective occupation of the territory by four divisions of the Kalgachi Defence Force. Whilst furiously opposed by Shireroth's Elianist elite, the occupation was met with toleration and occasionally welcome by the Northbloom population, except for those around Fort Ermingander itself who but politely but firmly declined Kalgachi requests to access the fort, citing its sanctity as Mondo's domicile and his need for uninterrupted sleep. The resulting assertion of a Kalgachi protectorate over Northbloom was therefore of a low profile and concerned almost entirely with the provision of security, the delivery of alms to the poor and the encouragement of such community governance nodes or commercial enterprises as might emerge.

Although promised a joint protectorate over Northbloom under the Treaty of Gloomburg that had terminated the Inner Benacian Conflict, Benacia Command, acting through the Unified Governorates of Benacia (UGB), had been tardy in enforcing the obligations upon Northbloom, a function of its lesser strategic importance compared to the Upland Confederation. This changed however with the onset of the Second Elwynnese Civil War (1692 AN – ) as Kalgachia had refused the demands of Benacia Command to facilitate the transit of forces through its territories from the UGB to attack rebel held Amokolia. In consequence of this rebuttal, Kalgachia was placed under an interdict and sanctions by Benacia Command, affecting primarily its land border with the UGB. Naturally this pushed Kalgachia into amicable relations with rebel held Elwynn and Amokolia, resulting in the bestowal of diplomatic recognition, the supply of military equipment and strategic raw materials on generous terms of credit, and the deployment of a military mission to protect that newly established lines of communication between Kalgachia and the rebel territories, which inevitably were run through Northbloom. Aware of this increasing level of cross-border traffic, and the appearance of Kalgachi surface to air missile systems in the rebel order of battle, Benacia Command began to insist more vociferously on being entitled to fulfil its treaty rights in Northbloom. The Kalgachi continued to stonewall, reject, and rebuff, correspondence received from the Pact whilst covertly mobilising regiments of reservists and dispatching them during 1694 AN into Northbloom and southern Amokolia.

The threat to Northbloom was realised during 21.XIV.1695 AN when the Saznan Darneï of the Black Legions, conveyed into theatre by an immense strategic airlift operation from Florencia began a dawn parachute landing and assault against Highbloom and Northbloom while the armoured and mechanised formations of the Elwynnese 2nd Pansararmé moved forward after a short artillery bombardment across the line of control that separated Pact and rebel forces. Faced with the rupturing of the rebel front, and the landing of significant forces to their rear, the Northbloom Dragoons were obliged to retire towards the protectorate, lest they be encircled by one of the advancing armoured spearheads and destroyed entirely whilst in Amokolia.

The Reawakening of Mondo

On 20 II 1702 AN, Mondo announced his reawakening in a short radio broadcast from Fort Ermingander. The transmission, soon dubbed the Cibolan Cake Declaration, outlined a claim to various lands on the continent of Cibola, but made no mention of Mondo’s intentions towards Northbloom. The following days did however see an increase in activity in and around the fort, culminating in the appearance of a massive antenna array during the night of 23-24 II 1702. The nature and purpose of the array remained unclear, resulting in heated speculation among Mondo aficionados and conspiracy theorists.

For the next decade, Mondo appeared content to allow the Kalgachi protectorate to continue, at least in name, restricting his direct involvement to the extravagant construction of Ermingander Village. However, the status quo became increasingly untenable in the face of the Benacian Union's growing influence over Kalgachia, and soon after the signing of the Treaty of Oktavyan in 1716 AN, Mondo unilaterally announced the termination of the protectorate.

The dormant personage of Mondo Etzeterra remained Northbloom's de jure head of state throughout the Kalgachi protectorate. Although he was not in a condition to wield administrative power, the legacy of his ideas and innovations nonetheless exerted a strong influence among the population at large who organised their own affairs on a community level with supervision from the Kalgachi protectorate government. The protectorate authorities, headed by a Kalgachi-appointed Lord Protector, were more heavily involved with larger initiatives such as the resourcing and training of militias, humanitarian aid projects and the maintenance of a basic level of infrastructure, the most visible of the latter being a railway linking Fort Ermingander with the Kalgachi city of Katarsis.

With the termination of the protectorate in 1716 AN, Mondo has once again resumed de facto leadership of Northbloom and now styles himself Prince of Northbloom. Day-to-day administrative authority currently remains delegated to the former Kalgachi Lord Protector, albeit retitled Chief Minister.

Northbloom is defended by the Northbloom Dragoons, a locally-recruited division of mounted infantry supported by a handful of Minarborian-era air defence and fire support systems. These are assisted by various professional and reservist formations of the Kalgachi Defence Force on rotating postings.

Northbloom remains loosely integrated into the Kalgachi economy, although recent years have seen growing links with other Mondosphere countries. Along with timber, its most notable export is specialist electronic equipment from a number of small workshops throughout the territory which seek to preserve the technical wisdom imparted by Mondo. Many of these workshops have an active relationship with Kalgachi state enterprises and collaborate with that nation's University of Bergburg on matters of applied engineering. In return Northbloom imports a modest amount of consumer goods along with light industrial and agricultural equipment.

The inhabitants of Northbloom are descendants of Minarboria's minor aristocratic and middle class coterie which attended upon that empire's ruling House of Rossheim, having migrated north from Lywall to establish homesteads adjacent to the sprawling estates of Princess Octavia. They share this origin with the population of northwest Kalgachia (previously the southern portion of the Principality of Highbloom) which has earned both peoples the ethnic designation of Lywallers.

Like their neighbours inside Kalgachia the population of Northbloom are renowned for their effortless jollity and good cheer, but their character is distinguished from that of the Kalgachi by the slower pace of life in their less-developed homeland - some have described them as "infuriatingly rustic". This distinction is further marked by customs arising from the cult of Mondo, an enigmatic figure whose creed rivals the Troglodyti of Kalgachia or the Umbra of Lepidopterum for impenetrability yet differs from those esoteric orders in being practised across the wider population. Among them the imperative to do "Mondo things" is considered of paramount importance, yet no definitive answer has yet been obtained to what "Mondo things" actually are - the Northbloomers' taste for gratuitous tea parties, mechanical tinkering and watching television (which they still call by the archaic Minarborian term "viewscreens") are believed to be examples, although the clues to countless others are thought to exist within the confines of the sealed Fort Ermingander. Northbloomers pressed on the nature of "Mondo things" will inevitably switch to an argot of oblique idioms ("poppeting", "bamferboozling", "fradging") when approaching any level of detail and claim an inability to articulate themselves more plainly.

To Northbloomers, the pursuit of "Mondo things" - most often within the occluded confines of sheds and ramshackle workshops - appears to have precedence over any kind of 'day job' and Northbloom's economic productivity remains consequently low, although the steady trickle of inventors and whackjob scientific geniuses created by this habit has gone some way toward redeeming the deficit.