"Stockpiles? I'll say. If ever this Garden of ours falls to some foreign horde, our conquerors will never need to lift a finger in work again."
—Unnamed DLEP official, heard at the sidelines of the 6th All-Garden Economic Development Symposium in Katarsis City, 205 AL

The Economy of Kalgachia has several distinctive features determined by the geography of the country, its natural resources, its geopolitical isolation and the cultivated work ethic of its population. It tends heavily toward the production and exchange of physical commodities, with most aspects of the service and infrastructure sectors being nationalised or church-owned as was the case in its predecessor state, Minarboria.

Land Ownership and the Primacy of the Church

Although free economic enterprise is nominally permitted in Kalgachia, it falls short of capitalistic excess in large part due to a prohibition on the private ownership of land and its consequent absence as a tradeable asset - any land not directly requisitioned by central state organs defaults to the ownership of the Church of Kalgachia, each parish of which is obliged to provide its inhabitants with housing. Although the operation of small-scale private enterprises from church-owned housing is permitted and communal marketplaces are maintained in most parishes for the sale of private goods, business ventures requiring dedicated premises are only allotted land if they cede themselves to Church ownership (in practice this is generally a formality, with such businesses retaining their previous management and permitted some freedom to operate as long as their activities remain within the moral imperatives of Church doctrine).

Church-owned housing is graded as follows:

The Church pays for the upkeep of its housing - along with other Parish-level public services for which it is entirely responsible - through its considerable accretion of business interests which, even after the cost of public services is deducted, makes it by far the wealthiest entity in Kalgachia (this funding model was originally pioneered by the Church of Minarboria through its subsidiary 'Shrubway' restaurant chain). This has occasionally caused problems of corruption among the junior clergy requiring central intervention, but it is generally agreed that without the moral and spiritual vigilance of the Church against the insidious temptations of the pecuniary archon, the sequestration of such a large proportion of Kalgachia's wealth in the hands of any other authority would be disastrous.

The Church-owned businesses of each Kalgachi Parish are required to tithe a proportion of their production to their superior March, the greatest proportion of that being tithed onward to the Directorate of Labour and Economic Planning (DLEP) for use in large projects. Industries of designated strategic importance are run as unitary enterprises under the direct ownership of the DLEP or other state organs.

The Sanctity of Food

Due to Kalgachia's strict policy of maintining 'food sovereignty' on agriculturally sub-optimal terrain, all production of food is monitored closely by the Directorate of Health and Public Welfare (DHPW) which is empowered to impose corrective measures - upto and including full management takeovers - of any food producers, processors or distributors considered to be wasteful in their operations. It works closely with Kalgachia's internal security service, the Prefects, to identify price-gougers or hoarders. Church partisans do however enjoy the exclusive privilege of hoarding food in their many concealed caches, the partisans' status as a food source being considered essential in wartime to maintain local support during an invader's punitive reprisals against civilians for partisan activity, as well as offering a lifeline in case of the attempted extermination of the Kalgachi population by artificial famine (including on a strategic level by the deployment of mass chemical defoliants or biological pests against Kalgachi farming areas). In addition to this, the DHPW itself maintains substantial reserves of long-shelf-life food in deep underground installations.

Due to a risk inexplicably termed by initiate seers of the Troglodyti as 'Ceaușescu's Folly', the import or export of food to or from Kalgachia is strictly forbidden, with the exception of recreational beverages such as Stalemate Gin. This theoretically ensures that the nutrition of the population never becomes existentially dependent on foreign trade and eliminates a vulnerability which might be leveraged against Kalgachia by foreign powers. In practice however, the small-time smuggling of luxury or exotic foods unobtainable by domestic means - such as saltwater fish - is persistent and in places officially tolerated. 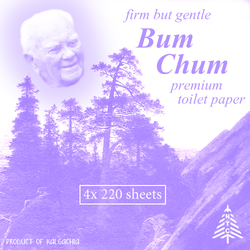 The Kalgachi economy is geared heavily toward national autarky and deals overwhelmingly in raw materials and commodities, assisted by the heavy exploitation of native energy sources. The Kalgachi standard of living, whilst broadly tolerable, is nonetheless a fraction of that suggested by the nation's industrial capacity - this is due to the reservation of a substantial portion for national defence and the stockpiling of essential supplies to sustain the Kalgachi nation in times of blockade or war, priorities which override all others in national economic planning.

The largest five sectors of the Kalgachia economy (measured by labour input) are:

The following Kalgachi enterprises are considered so strategically important or dependent on specialist input that they are vertically integrated into non-Church organs of the Kalgachi government. Those concerned with the manufacture of consumer goods often operate their own retail outlets in large urban centres.

The Kalgarrand and its denominations.

Kalgachi currency adheres to a very literal form of the gold standard, containing that precious metal physically within all its denominations. The base unit of Kalgachi currency is the Kalgarrand (kgr), a coin of 99.9% fine gold at a weight of 31.1 grams (1 troy ounce), 2mm thickness and a very small diameter of 18.08mm. Owing to its immense value and impractical ductility, the Kalgarrand coin is not often used in everyday commerce and where it is, it is invariably mounted within a protective casing. Denominations of Kalgarrand are minted as an alloy of tin with the appropriate proportion of gold content. The most valuable of these is the Half Kalgarrand, of equal weight in both gold and tin although the lesser density of the latter results in a larger coin of 22.44mm diameter. Coins of lower value retain the Half Kalgarrand's size, but with less gold and more tin as appropriate to their denomination. The differing proportions and densities of the alloyed metals give each coin a unique lustre and weight profile which aids greatly in authentication, although this variance is less discernible in lower denominations and generally requires specialised analysis such as spectrometry.

Although traditionally expressed as a fraction for high-value transactions, sub-Kalgarrand amounts are expressed decimally as Millirand (thousandths of a Kalgarrand) in everyday use.

Before 205 AL the majority of Kalgachia's remaining cash outflow (and a corresponding proportion of gold bullion) was paid to various enterprises of the Port of Vines via the Octavian Import-Export Corporation and the Nova English Trading Company. After 205 AL the emphasis switched to enterprises of the Batavian Confederation, much of it through the Iron Company. An substantial amount is also circulated through Kalgachia's protectorates.