The Jierdai Dynasty, officially the Dutchy of Kildare, the Apollonian Republic of Shireroth's East (abbreviated to A.R.S.E.) or Eastern Empire, is the name given by Jingdaoese historians of the Greater Jing School to the period between 1451 and 1623 AN. It's the era in which Apollonian Jingdao was administered by a series of Kildarian, or Apollontean, leaders. The dynasty, consisting of members which barely had any familial connections was successful in pacifying the divided and war torn lands between the Shire Sea and the Antya River.

United under Kaiser Gaelen I of Shireroth in 1451 and acting as a mere Duchy under Shirekeep's grace, the lands flourished under its capable rulers. At the beginning of the 17th century, the realm reached its largest extent under the Myxosean Emperor, the Qiang Empress as it encompassed its original territories and attached Aryasht to its lands through marriage. It eventually became independent under the Tongyi Emperor in 1617 AN, after which the Great Jing usurped the Throne.

The early period in which the Jierdai pacified the Jingdaoese territories. 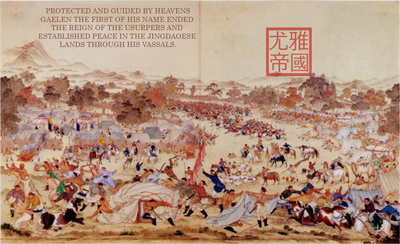 In 1451 AN, the last emperor of the Youya Dynasty, the Taiyang Emperor, was defeated by Kaiser Gaelen himself.

At the time of Kaiser Gaelen's invasion of Apollonia, the Empire had been severely weakened by the struggles between its many small kingdoms and republics. In a last desperate attempt to unite the realm around the Emperor of Xiacheng, the Union of Apollo States had been created in 1451 AN. The political power struggle in the Seanad and calls for separatism crushed any potential dreams, as rioting happened accross the whole country. The diversity that had once been the strength of the several nation states, had now dealt a devastating blow.

Making use of the weakness, Gaelen sent an armada. His armies landed in Zhaoqin Province, at what now is known as Gaelen's Landing. His military campaign met with success after success. While his troops were outnumbered, the Jingdaoese people were divided in ethnic and nationalist struggles between themselves. While crushing their resistance, his armies rushed eastwards. In Xiacheng, the emperor assembled an army to defeat the invaders. It was to no avail, as the Taiyang Emperor met a humiliating defeat at the hand of the Kaiser in the Battle of Jasoniacheng.

The emperor died during the fight, and the Seanad - in full panic - offered the Kaiser sovereignty over everything west of the Antya River. Gaelen, knowing that an attack on Xiacheng (known for its impressive walls and defences) would endanger his recent achievements, agreed to the peace terms. This effectively ended Xiacheng's grip over the western region until its conquest in the early 17th century by Shireroth.

The news of the swift victories of the Shirerithian conqueror also reached the less developed northern territories. Frightened by the quick collapse of the city states and even the emperor, a local warlord, Ozymandius the Great gathered an army around him to defeat the invading forces.

The independence struggle continued long after the pacification of the south. The Shang Emperor, also known as Patrick Foley, was appointed as a vassal duke (or Dutch) to the Kaiser and successfully combatted any attempts of Ozymandius to liberate the south. The new emperor's policies met with certain degrees of success in crushing pockets of resistance in the south, while also halting any northern offensives. In 1469 AN, he was reconfirmed as ruler over the Jingdaoese lands (thanks to his contributions). It was also the year in which Ozymandias was forced to retreat northwards and give up his plans of liberation. Around this time, the partisan disappeared from public life. Myths about the Golden City of Ozymandias spread a decade later, when the so-called liberator was found death in a Dalmacijan grave with golden statues around him.

Eventually, the north would be definitively brought under proper rule by the Gurifon Emperor, around 1494 AN.

Around 1533 AN the Kildarian plague ended. This led to a renaissance in the backward Kildarian region: the Ducal government underwent reforms, re-established trade routes and was a period of outward expansion. Xiacheng, known as Apollo City, was annexed into the Realm and became a cultural centre.

In 1604 AN, the Late Jierdai's ducal power became more concentrated in the hands of the House of Myksos. Around 1617 AN the peoples of Jierdai revolted against the Shirerithian dominance and gained independence.