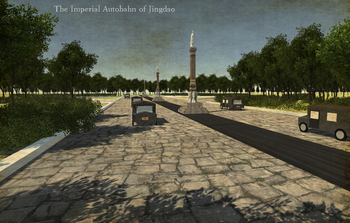 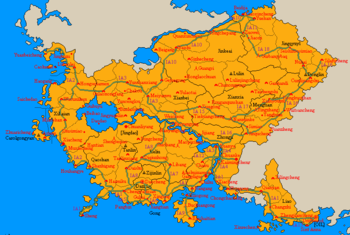 Map of the Imperial Autobahn in the year 1687.

The Imperial Autobahn, Teikoku michi, or Imperial Road, is the spiritual successor of the Ducal Roads in Kildare. These controlled-access highways connect large cities in the Jingdaoese Empire with each other. The highways are property of the Empire and no State can - without approval of the Grand Secretariat collect tolls. The portion of Imperial Autobahn 1 connecting the two separated halves of Alrig with one another over the sea were uniquely built with the help of international partners such as Ralgon as a part of the Erazm Bridge Consortium.

Unique to the highway system is the attempt that was made to let it blend with the surrounding nature. In the early days the highways were seen as a propaganda tool: the fastest ways were not necessarily taken. The roads bent with the landscape, to maximize an enjoyable trip through the realm. Statues of Sisera were often found across it. During the reign of the Chidao Emperor the focus was shifted towards the economic needs of the empire. Many of the historic roads were replaced with concrete. New roads would often follow a more efficient path, in those cases the old routes have been kept as Historic Autobahn and are off-limits to heavy vehicles.

The oldest and most famous Imperial Autobahn is Imperial Autobahn 1. This has become a cultural icon of the Jingdaoese Empire. Likewise, the many long bridges on the Autobahn System have been the envy of many other nations. They are usually painted bright red, with gold coloured or even gold plated ornaments. The exceptionally long bridges from Gong to the Jingdaoese mainland that are part of the Imperial Autobahn 9 attract many tourists each years that wish to witness the engineering marvel. The bridges are often constructed on difficult locations, a Jingdaoese tale is that this is because the emperor drew the bridges by hand on a map and ordered his bureaucrats to build them. The bureaucrats realised that spending a little more public funds on the unlikely bridges would be preferable to them than criticising the plans of the emperor, which would be like volunteering for decapitation.

The Imperial Autobahn is open to vehicles:

Some of the roads adhere to the Maoxiang Standard, specially licensed vehicles on these roads: