From MicrasWiki
(Redirected from 1690 recession)
Jump to navigationJump to search 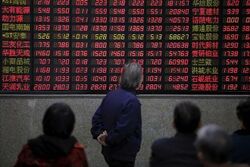 The crisis hit the Jingdaoese market hard. Unemployment rose for the first time in four decennia.

The 1690 recession was an economical and financial crisis that gripped the Great Jing Dynasty during the early 1690's and raised fear for a new political crisis. In 1690 AN, the economical isolationism which dominated pre-war policies had long been gone.

The Empire, having been reliant on an input of Bassarid funds, had survived the immediate post-war years relatively unscratched. The 1670's and 1680's had seen a huge growth in GDP and modernisation of industry. Eventually, the nation had withstood political crises and a collapse, alike the Kalirion Fracture, due to its rapidly increasing living standards. The reign of the Chidao Emperor had therefore become synonymous for a wealthy and good life.

With its own economic power growing - and even overshadowing its allies - it increased investments in foreign, allied USSO markets. The markets, becoming more and more reliant on foreign profits suffered a setback when the Bassarid Empire grudgingly announced its retreat from its oversea territories. Panic ensued as the stock market went into the red and several companies started filing for bankruptcy.

The steadfast belief in a blessed and prosperous life under the Chidao Emperor received a heavy blow as unemployment rose. To avoid a political and social crisis, the Heavenly Light started replacing its ministers of the Old Guard with new, young faces. Most shockingly was the removal of Zhang San from the Diwang office when he was replaced by his own son, Jin San. More replacements (and so-called 'promotions') followed throughout the years.

Huge educational reforms, combined with increasing investments in the railway system and international projects as the Apollonian Express received attention of the Grand Secretariat. The establishment of representation on a provincial and local level was also groundbreaking and intended to shift criticism and blame towards the central government towards local assemblies.

With the ascension of Chidao to Heaven, the lack (or inability) of reaction from the Xinshi Emperor, some of the reforms (like the local assemblies) formed the base of regional autonomy during the Post-Chidao Troubles.