The Apollonian Express is an intended international train service across the continent of Apollonia.

The first initiative for this was taken in 1590 AN, but the plans were not implemented. Only a train connection between Senya and Jingdao was successfully established.

The second initiative was started in 1694 AN. The outcome is still uncertain. The International Mandate confirmed its willingness to co-operate and invest in the railway connection, with the construction of the Blackfriar's International Station being constructed in 1695 AN as one of its end stations.

The Apollonian Express company was incorporated in 1702 AN in Çakaristan, Hurmu and Senya, with the mission of the company to provide unabridged links for both passenger and freight goods across the continent. The company makes most of its money from freight traffic, where the service ensures a quicker and more direct links than traditional sea-faring freighter ships, and provides greater access for trade integration across the continent. In addition to the freight services, the Apollonian Express often operates international passenger services, and the occasional domestic service, on behalf of local and national rail operators. 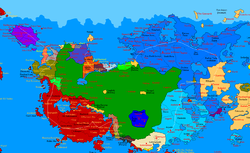 The first proposals for an Apollonian Express were put forwards in 1590 by Senyan representatives who proposed an almost circular route around the Apollonian continent. Their original route would have ran from Tyrasia in Kyrovistan, clockwise through Gerenia, Safiria, Brogenia, the then Ocian territory of the Walker Democracy, across the Babkhan territory of Nuristan, before traversing Gralus, going as far north as the capital of Shelsa, before darting southwards through the Storish region of Hålogarike to the city of Ghawlama in Hurmu. From there it would continue south-west, through Antica, Flanders, the Natopian territory of Saint Andre to Apollantis, before crossing into Kildare, going north-west before arriving in Senya, cutting through the cities of Tiga and Dyas before arriving in Tirlar, before going north into Storej, completing the journey at the Storej capital of New Pyongyang. A further Craitish extension to Cherry Trees was also proposed. By 1596. portions of the route had started being constructed in Apollantis, however the full line was never completed thanks to the instability of several of the nations across Apollonia, which were being connected to parts of the Kildari rail network, which had been constructed in 1558, however these lines were only ever partially completed.

One nation that did not suffer such instability was Senya, who had originally proposed the project. Senya established an extensive domestic rail network, which included long distance cross-country routes, as well as smaller regional and commuter lines, and additionally built its own connections to neighbouring countries. Prior to Kildari independence, a Svorgas–Port Nevermore line had been built, which was closed due to the events of the River Warrior War in 1618, prior to a line out to Tirlar in Arboria being opened in 1668. Passenger services to Port Nevermore (now Yuanbeicheng) resumed in 1685, as well as the construction of a mainline to Daocheng in Jingdao. The Svorgas–Daocheng line was founded as a 50%-50% venture between Senyan Rail and Kirudofea, with all lines out of Senya running under the Senyan Rail umbrella.

Whilst suggestions had always rumbled about re-booting the old Apollonian Express project, formal talks began in 1694 after the initiative was picked up by the authorities in Çakaristan. With the collapse of Gralus, new plans will route the train's path through Lac Glacei with support from the grand duchy. 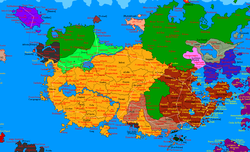 The proposal of 1694 would see several routes operated under the Apollonian Express banner with the Senyan capital of Svorgas and the Çakari capital of Agra becoming central hubs of the railway. The line from Svorgas to Jingdao would be extended through southern Jingdao to Sint Anna in Alrig, with the Svorgas–Yuanbeicheng and Svorgas–Vancona routes being added to the Apollonian Express banner but being served as connecting services. The Svorgas–Tirlar route would also be extended out to Hawshire with a new tunnel. There would also be a new Svorgas–Agra route, which would run north through Senya to Hreĵnɏeg, where the train would cross the Camoleo River into Jingdao, where it would travel eastwards across Qyzylqaystan through to Çakaristan. An additional line between Xiacheng and Cundiyangshu would traverse Jingdao in order to connect up the Svorgas–Sint Anna and Svorgas–Agra services.

In the east, a service would run between the Florian city of Dragonmoor and Maulikpur in Çakaristan, as well as from Dragonmoor through to Agra southwards via Manbai. A service between Agra and the International Mandate's capital of Tiegang would be established, with a final line, a service between Fatehpur and Ghawlama in Hurmu being established, that would traverse through south-eastern Floria would also be established, with trains separating in half at Ghawlama, with one section carrying on into Lac Glacei where trains run services circumnavigating Lake Glacei, as well as carrying on out east to Ergo Sum, whilst another part would carry on out into Arbor, where it would reach Madinat al-Fath.

To the north, a line would terminate at Alexandretta in Meckelnburgh, crossing the border at New Millaro. The route would utilize dual gauge along Meckelnburgh's preexisting southern rail corridor. However, the route is uncertain as of 1699 AN, as a connection across the Green is required.

Additionally, Craitland and Thracistan would be connected up to the railway by freighter services, with the Craitish line between Cherry Trees and Osĵätoņ (via Mainlae) coming under the Apollonian Express brand.

The construction of a trans-continental railway inevitably through up a number of issues, that those creating the railway would have to resolve.

Due to its troublesome relations with its neighbour Floria, Jingdao - under the leadership of Jin San, who had been born after the War - reluctantly warmed up to the idea of opening the borders. Heavy border controls and disinfection of anyone entering Jingdao at the Florian border, were proposed as possible solutions to the 'Florian problem'. In the end, the Florian administration blocked the proposal to connect the railway with the Jingdaoese lines. The decision was sheered upon by most of the Jingdaoese population, who celebrated the decision by throwing eggs at a puppet of the nation's president. The decision to block routes through Jingado and Floria was reversed in 1702 AN.

Another issue was the wide variety of gauges used in Çakaristan compared to other nations on Micras. With much of Apollonia running on standard (1,435 mm) gauge, Çakaristan decided to adapt its lines along its route, using dual gauges to ensure that Apollonian Express trains could enter its territory without a gauge break.

In 1695, civil unrest started in Jingdao which lead to widespread protests and political instability that threatened the completion of the project. In response, Senya decided to focus on upgrades to the network within its borders and to the lines out to Arboria and Hawshire, whilst announcing increased security checks on trains coming in and out of Jing territories. Since the foundation of the Great Apollonian Empire and the cessation of hostilities, train services could take place again.

In 1701 AN, the Arboric Civil War began which halted the construction of the railway between Ghawlama and Madinat al-Fath.

After the successful annexation of Port Balaine by Floria and Thracistan becoming incorporated into Cakaristan, this created instability around the archipelago causing disruption to ferry routes with a large buildup of Florian navy vessels blocking the routes in retaliation to the Kadim Treaty and protect the national interests of the Florian State.

One solution the Apollonian Express came up with to prevent any nations/areas being cut off was to create multiple routes to ensure that in the case of a border closure, traffic could be rerouted via a different line to ensure that the movement of goods and people would face minimal disruption. The plans are for 24 passanger services and 13 ferry/freighter services to be reguarly operated, though the entire network is designed so that freight travel and special trains may be scheduled according to need (for example, a freight service could run directly between Tiegang and Svorgas, where as passengers would have to change at Agra, Suryapur and Hreĵnɏeg). The network will serve 116 railway stations across 10 nations, and 14 sea ports across 10 nations. Overall, 14 nations will be part of the project, with four (Dark Berry Islands, Jääland, Meckelnburgh and Thracistan) exclusively being served by ferry/freighter services.

The following nations have indicated their participation in the Apollonian Express initiative of 1694 AN in alphabetical order: