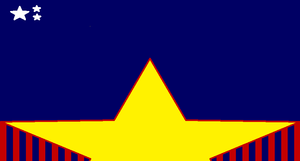 Flag of the City of Dyas

Dyas is a Senyan city in the north-west of the county, about 30 miles from the border with Elwynn, and about 50 miles from the River Warriors' AR.
Dyas is the third most populous city in Senya, behind Svorgas and Jogasim.

Dyas was founded by Elwynn immigrants that entered Senya from the north in 1471 as New Elwynntown. The city has enjoyed having economic prosperity, with the Bank of Senya being founded in the city in 1683. In 1882, the city changed its name to Dyas.

Dyas has a varied climate, but enjoys long, hot summers, and cold but short winters. Temperatures in the summer can get as high as around 35 C, and in the winter can fall well below -25 C. In December 1996, temperatures in the city dropped to -41, and many people died from the cold.

Dyas is seen as the sporting capital of Senya. Football is the most played game in Dyas, with the city having three professional teams, Dyas Scitenhima Ĵets (who play at the ĴetsStad in the city centre), Dyas Rangers (who play in the north of the city at Rangers Park) and Park Prinsipa (from the south-east of the city, who play at Volker Park).
Dyas is also home to Micras Hockey League franchise Dyas Stiks, with ice-hockey being a very popular sport in the city.
Dyas is also home to two other professional teams, Dyas RFUC, a rugby union team, and D.Œ.V.K., an ólbescból and footby club.