Ólbescból, commonly but not officially referred to as orbishball, is a sport played between two teams of three players with a spherical ball. It originated in Craitland, where it is considered the national sport, and is played, uniquely, on a carpeted and walled indoor court. The object of the game is to score by kicking the ball against the raised scoring area at one end of the court.

Players may touch the ball with any part of their body, but points may only be scored using the feet following the ball being released from the hands. Scoring of points occurs when the ball is kicked against the scoring area, which gains the team one point, with an extra two points being gained if the ball settles on the raised level below. Games are won by the team with the most points at the end of the match, which lasts for two halves of 25 minutes. Although there is no international organising body for ólbescból, Cräiteland Ólbescból is seen as the final word on its rules. 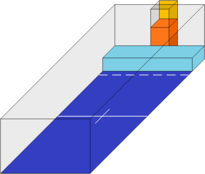 A 3D rendering of the court. Not to scale. Click for full image.

The surface of the court is made of carpet which is no thicker than 2cm. The court's walls are made of a strong, clear material such as safety glass or Perspex, with the ceiling often being the same material but with welded wire mesh being more commonly used. The scoring zone and padded defensive level are made of the same materials as those used in high jump and pole vault landing mats.

The court has a number of markings on it. A solid line is placed across the full width of the court at the halfway point of the side walls, with the midpoint of this line also being marked as the centre spot. A dashed line placed 8.75m from the back wall is also marked on the court. These markings are normally included in the design of the carpeted floor, but are sometimes painted on.

The ball is spherical and made of foam, similar to a stress ball. It must be between 21.5cm and 22cm in circumference and between 1g and 2g in mass.

An ólbescból team consists of three players. In addition, up to four substitutes may be named, and unlimited substitutions may be used freely throughout the match. The players must wear matching jerseys, shorts and socks.

An ólbescból match is played over two 25-minute halves, with an interval of 10 minutes in between. The object of the game is to score more points than the opposing team, by scoring goals (3 points) and ólbs (1 point). A goal is scored when the ball is kicked against the scoring zone and settles on the raised scoring level, and an ólb is scored in the same way except the ball does not settle on the raised scoring zone.

Any contact, either incidental or deliberate, is deemed a foul if it disturbs play in any way. Contact fouls are penalised with a penalty kick. The only other offence that incurs a penalty kick is spitting at an opponent. Allowing the ball to settle on the court surface and playing the ball in an incorrect manner both incur free kicks.

In addition to the award of free kicks and penalty kicks, the referees have the power to caution and dismiss players. Coloured cards are used to communicate these disciplinary sanctions. A player who has been sent-off is shown a red card and may play no further part in the match, and his team plays the rest of the match with one fewer substitute available. A cautioned player is shown a yellow card.