The coat of arms of Craitland is the heraldic symbol of the Kingdom of Craitland, used to represent the monarch, government and people of the nation. The arms themselves were initially designed by Craitman in rudimentary fashion shortly after the nation's foundation in late 2002 and were used as a national emblem until an indeterminate date in 2007, upon their granting and blazoning by the micronational College of Arms' herald Regicollis. 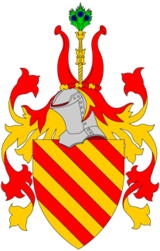 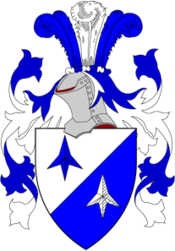 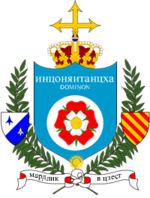 The Craitish coat of arms heavily influenced the design of the state seal of the defunct autonomous territory of Incontinentia. Though officially not a coat of arms having not been granted by the College of Arms, Incontinentia's seal used the Craitish arms but replaced the primary white of the crest with a light blue, with the Pelle rose smaller in size and surrounded by a white circle. Above the rose sat the words "Инцоняитанцха" ("Incontinentia" in Incontinentian) and "domiņon" (Craitish for "dominion"). The banner below the crest was also modified to read "Мардлик в Цзести", the Incontinentian translation of the Craitish national motto.