Craitland's history can be observed as having two separate periods, being distinguished as time before and time following the nation's claiming on Micras. During the former period, the nation's history and development primarily revolved around real-world activities, whilst since joining Micras, Craitland has further embraced a more fantastic culture set within in-character story lines and simulation.

Note: The content of the following article summarises the out-of-character history of the nation, while the adjacent in-character narrative is available on the main Craitish article.

The history of Craitland can be traced back to 2002, when the nation was established by Craitman. That year, albeit at an unknown time, a concept map was created by Craitman for an island named Cräiteland. Following developments, the concept was broadened into its own nation before being declared independent on December 12, with Craitman establishing his parental home as the nation's embassy on Earth. Following its independence declaration, Craitland spent its earlier years being utilised primarily as a means of generating sports results and for Craitman's personal interactions with acquaintances.

Craitland's first ties to online micronationalism came through the discussion forums for the nation of Lovely in 2005, following the television series How to Start Your Own Country. Having watched the series, Craitman gained Lovelian citizenship and also attempted unsuccessfully to garner relations between Craitland and Lovely. Shortly afterwards, Craitman's involvement in Lovely halted and so did Craitland's online presence as a result. A year later, in the summer of 2006, Craitman revisited Lovely's forums on impulse and, whilst perusing, discovered mentions of and links to the Micronational Cartography Society. After subsequently visiting the MCS and learning of its purpose and practices, a claim was submitted for Craitland to join Micras in August 2006.

Craitland's Micrasian claim was accepted by the MCS the same day it was submitted and the nation was established on the Hóm Islands off the eastern coast of Corum; appearing on the organisation's official claimsmap for the first time on version 9.0.0, dated September 6, 2006. In the months following its successful claim on Micras, Craitland's online presence expanded to include an official government website, citizen discussion boards and a website for the CrFA; its national football association. Craitland's first major involvement in the international community came in December 2006, with its national football team's participation in the inaugural FMF World Cup.

In early 2007, Craitland's development focused on publicising most of its details which were previously inaccessible and creating diplomacy with other Micrasian nations, with a number of new citizens also joining the nation. Having joined Micras around the same time, Craitland aligned itself with Passas, Novatainia and Tokidoki and formed the Micro Illuminati; an organisation based around mutual trading and sharing expertise. During this time, Craitland also annexed the nation of Incontinentia, which had been founded a number of years prior by a personal friend of Craitman's. Incontinentia was reëstablished as a trading base on Micras, at the south-western tip of Keltia, and was accepted as Craitland's first expansion on claimsmap version 10.2.0 on March 9. During a period of notable activity and development, Craitland expanded its claims on Micras once again in May 2007, following the demise of the prospective nation of Amoria, of which Craitman was a citizen. The autonomous territory of Zandarijn, which took its name from one of the Amorian states, was established in south-eastern Cibola, and first appeared on claimsmap version 11.0.0a on May 20.

In late 2007, Craitland successfully expanded once more with the foundation of the autonomous New Vaduz in central Keltia. New Vaduz's first appearance on the MCS claimsmap came on November 21 that year, with version 12.5.0.

The dissolution of one of Craitland's allied nations New Brittania led to more land coming under Craitish sovereignty in early 2008. New Brittania's death resulted in a dispersal of its colonial possessions, with the island of New South Vietnam off the south-eastern coast of Keltia being bequeathed to Craitland. New South Vietnam appeared as an autonomous territory of Craitland on claimsmap version 13.2.1 on February 29 for the first time and remained under Craitish administration until August 30 the same year, when it was gifted back to a newly-revived Britannic Empire as featured on claimsmap version 13.5.5. The following week, Craitland's largest expansion of territory was accepted by the MCS, with the nation's entire mainland being relocated from the Hóm Islands to the Fifth Isle in the very north of Micras, north-west of Apollonia.

The Fifth Isle and changing borders

Craitland successfully claimed the Fifth Isle in September 2008, initiating a new period of the nation's history. The nation's capital was relocated from the Hóm Islands to the Fifth Isle in the relocation, with the former Cherry Trees being renamed to Hóm City. The Fifth Isle first appeared under Craitish control on claimsmap version 13.6.0 on September 6. Craitland's territory remained relatively stable in the months following the relocation of its mainland up until mid-2009, when long-term allies Passas were annexed as a means of denying its demise. Situated in western Keltia, Passas became an autonomous territory in June that year, appearing on the June 6-dated 13.8.9 version of the claimsmap, and remained administered by Craitland for approximately six weeks before being dissolved prior to version 13.9.4 on July 18.

Early 2010 witnessed Craitland's first reduction of land, with the agreement of the secession of Enthdover in the north of the nation. Enthdover's independence was recognised by the MCS on January 24, 2010's claimsmap version 14.0.7. Enthdover's nationhood existed for half a year before being declared dead and its land being ceded back to Craitish control, as appeared on version 14.2.2 on August 1 the same year.

Another independent state was later founded on Enthdover's former lands; Castrum Nazarene. This new nation agreed amicable secession from Craitland in early 2011, being accepted by the MCS for claimsmap version 14.4.0, dated February 13, and established itself as the authority over its religion's church across Micras. At the same time that Craitland ceded the land administered by Castrum Nazarene, the nation also reduced some of its territorial claims elsewhere, with the Hóm Islands being vacated and the most southerly portion of Zandarijn being unclaimed.

Castrum Nazarene existed as an enclave within Craitland for over a year, before being dissolved in April 2012, with its land once again being returned to Craitland, as recognised by the MCS on April 8, 2012 with claimsmap version 14.7.9. Either side of this restoration of land to Craitland, the nation underwent significant periods of consistency in regard to claims and development, with the narrative of King Craitman IV's marriage to Victoria's Princess Anika in June 2011—which took place in Castrum Nazarene's Cathedral of our Lady of the Fifth Isle—being its most noteworthy activity.

Craitland's most substantial change after Castrum Nazarene's expiration came in late 2013 when the nation of Hurmu, with which Craitland held cultural affinity, was declared dead. Craitland soon established the territory of Lakkvia in the region of the Holy Lakes in Lyrica, with the Craitish claims on the land being acknowledged by the MCS in November 24's 15.2.8 version of the claimsmap.

The following year, Craitland experienced a considerable loss with the deletion of its online discussion forums, which it had used continuously for almost eight years. Many documents, details, conversations and news reports were lost during this event, unable to be retrieved. Prior to the forums' eradication, Craitland had passed a landmark measure to establish the nation's first military forces. The loss prompted Craitman to establish an occupancy on the Bastion Union, a preëxisting forum shared by a number of closely-aligned independent nations, to act as Craitland's primary online presence, which occurred on October 16, 2014. Despite such a detrimental happening, 2014 also saw Craitland bid successfully to host the tenth edition of the FMF World Cup the following summer, giving the nation the opportunity to showcase itself via one of Micras' most popular events. 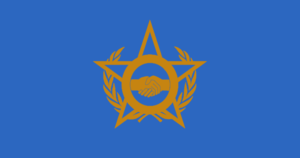 The flag of the Union of States around the Sovereign Oceans; a significant Craitish alliance.

In its attachment to the Bastion Union forum, Craitland established closer diplomatic ties with the nation of Talenore, a small city-state based on an island near south-west Keltia, bordering the Captive Sea. Talenore was annexed by Craitland after announcing its death, and was reëstablished as a protectorate shortly afterwards. Talenore's first appearance on Micras as such was with the MCS's claimsmap version 15.7.4, dated March 27, 2016. In a relatively quiet period of Craitland's history, Talenore remained a protectorate for almost a year, with no major developments occurring, before announcing its independence in early 2017. Talenore officially left Craitish rule on March 5, being portrayed as sovereign on the 15.9.1 claimsmap version.

Around the same time as Talenore's independence declaration, Craitland became a founding member of the USSO; a primarily military-based union of nations created as a response to the ongoing Hammish Civil War. The organisation's other founding members were Jingdao, with whom Craitland had close ties during the Batavian era of its history, Passio-Corum, the nation-state of the Passasian people whose homeland of Passas was once under Craitish rule, Gerenia, and Xang Muang. While the organisation's foundation received mix responses from the greater Micrasian community, due in most part to Jingdao's role in its recent confrontation with Shireroth, Craitland's involvement stemmed from a desire to provide constructive aid to the affected Hamland, with the USSO arguably compensating for a recent lack of Craitish international coöperation since the demise of the MI the previous year.

Due to growing disenfranchisement in the USSO, Craitland's affiliation with the USSO was reduced to observer status in March 2018. Following that, Craitland's most notable coöperative exercise was its involvement in the Humanitarian Mission in former Caputia, though the nation otherwise experienced a number of periods of developmental stagnancy.

As a result of the prolonged period without notable development, it was planned for Craitland to consolidate its claims via the decolonisation and resettlement of its autonomous territories. Prior to the inception of the consolidation plan, Craitland co-founded the Xäiville Convention as its most recent foray into diplomatic collaboration, establishing the open-trade-and-travel group alongside Mercury, Senya and Tellia after a number of years of amicable relations due to shared interest in Micrasian sport.

Beginning on 12 November 2020, Lakkvia became the first territory to transfer away from Craitish sovereignty; unifying with the Hurmu Trust Territory to reform an independent Hurmu state. The Keltian enclave of New Vaduz was abandoned later the same day, being immediately claimed by Alduria-Wechua, with all the above changes first appearing on claimsmap version 17.0.9. Two months following those initial steps, Craitland's longest-lasting territory Incontinentia was gifted to Alduria-Wechua on 13 January 2021; being first shown on the 17.1.4 version of the map. After an unintended delay, Zandarijn was eventually removed from Craitish control on 29 August 2021, completing the plan upon the publication of claimsmap version 17.4.2 on 5 September.

Despite vacating a large amount of its former land, Craitland would ultimately expand again on 16 December 2021 with the approval of the integration of Victoria, a nation in which Craitman held citizenship and a government role during its initial independent period prior to being annexed into Gotzborg in 2013. Victoria was displayed under Craitish rule on the claimsmap for the first time on version 17.4.7, the last map update of 2021.

On 16 March 2022, Craitland's over-five-year association with the USSO was formally ended following the union's organisational overhaul and succession by the CSA, of which Craitland chose not to retain its observer status.