Union of States around the Sovereign Oceans 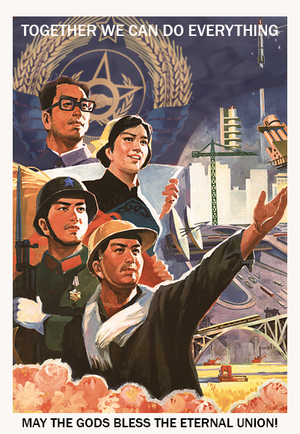 The Union of States around the Sovereign Oceans (USSO) is a collective defence, economical and cultural treaty organisation originating among the Jingdaoese Empire, Passio-Corum, Xang Muang, Alrig, and Krasnocoria. Since then, the union has expanded to include an estimated population of over 600 million citizens (more or less 34% of the world's population) and holds land on almost every continent across Micras. While originally established as a defensive alliance to counter (in its eyes, perceived) aggressive actions of a Shirerothian-Natopian axis, the focus and input from Passio-Corum swayed its members to establish and further integrate a common market between the members. It eventually developed into an economic, defensive and cultural union between very diverse states.

The Union itself traces its roots back in the Hammish Civil War, in which several of the founding states saw the interference of the Shirerithians in the civil war as very worrisome. Soon after, the alliance also began cooperating on the economical, cultural and scientific level. Since the Union Treaty of 1649, all citizens of each Union State can also apply for Union Citizenship, which guarantees free movement between the States. 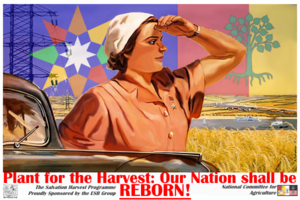 A propaganda poster in Hamland: the invading forces didn't even attempt to hide their presence and influence to the world.

The USSO was born during a period of heightened tensions due to the ongoing Hammish Civil War. Jingdao, which had undergone a change of government and (limited) liberalisation after the death of the Sheng Emperor, sought to regain some influence on the world stage. Its Blackrock Pact had also fallen apart and at the same time, serious concerns existed on the increased presence of Natopian and Shirerithian colonies on Apollonia, which it saw as its own sphere of influence.

It found allies in nations including Gerenia and Xang Muang, who were eager to protect themselves against what was perceived imperialist aggression from other nations; Craitland, which offered humanitarian efforts for future situations; and Passio-Corum, which sought to protect its economic interests around the Sea of Storms. Having seen the aggressive use of atomic weapons ( Operation Tymarian Sun ) and Hamland pushed into a lengthy and cruel civil war had both shocked and angered public opinion, which demanded the atrocities to be stopped. Much of the blame was put on the interference by the larger (western) states, which sought to use the war to their benefit. 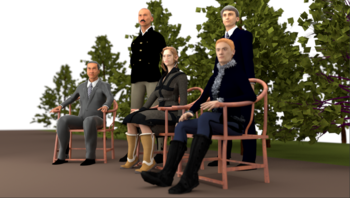 The five heads of government at the Conference of Voorpost.

In 1645, the Jingdaoese Empire, Craitland, Gerenia, Passio-Corum and Xang Muang gathered around the conference table in Voorpost (in Passio-Corum) to discuss the possibility of a tighter international cooperation to constructively work on a future for their micronations.

The cultural differences and even former rivalries (between Jingdao and Passio-Corum) were - remarkably - put aside and declarations of friendship were made and met with a certain amount of skepticism - and not much later - enthusiasm from the population of the participating member states. At the end of 1645, the rulers (or appointed representatives) of the founding states signed the Treaty of Voorpost: effectively establishing the Union.

The death of the Sheng Emperor and the rise of the Mingshi Emperor to active participation in politics fractured the attempts of the Union to counter the interference of SANE into Hamland. What had begun as indirect attempts (like blockades), soon became outright hostilities. On the 1st April, the Emperor - in a fit of madness - declared war upon Shireroth and its allies. This led to the outbreak of the War of Jingdaoese Immolation. In the meantime, Gerenia was blockaded by the Shirerithian Navy and was forced to declare itself neutral.

In attempt to save the strategic positions in Keltia, Passio-Corum invaded its ally and occupied its oversea territories. With the death of the Mingshi Emperor, those possessions were returned to Jingdao and relations restored.

Having survived the crisis, the members became convinced that a military alliance alone meant nothing. Several projects, including the Common Market, were launched.

The USSO Command Enterprise was launched during the June 2017 Summit.

In 1648 plans were made to finance the creation of a flying Headquarters, which could travel from one member state to another. This immense project, which was both a prestige project as an attempt to make the Policon HQ less dependent from one member nation, received heavy funding from not only the states, but also the private sector. It was launched during a ceremony in the presence of Chairman Tuân Quân in 1649, during the First Policon Summit and named the USSO Command Enterprise.

The First Summit began at a slow speed, which worried some member states and led to a decline of support for Tuân Quân, who was campaigning for a second term as Chairman. In the end, he was defeated and replaced by Kan Zen of Passio-Corum during a close election. During the meeting, the Florian Republic was also admitted to the Union, making it the first non-founding Full Member.

The Summit itself had some ambitious goals to strengthen certain aspects in cooperation between the nations, including the creation of an Union Citizenship, the establishment of Union defence units, free movement of people within the Union and stronger cultural cooperation (including a detailed map of Micras, thanks to investments in space satellites).

No war shaped Micras as much into what it is today, as the War of Lost Brothers. For the Union, it was the decisive moment to show that it was capable to defend the values it had agreed upon. At the same time, it was a deciding factor in the future relationships between the Union states and the Krasnocorian government.

The conscription of millions of soldiers led to a series of social upheaval among the member states, but was - after the war - brought back under control thanks to the economical revival. The mobilisation of the workforce was unseen: in some countries people who had never left their hometown were now forced to fight or work for their Fatherland. The Nova English and Bassarids engaged in sea battles, while the Jingdaoese and Krasnocorians were mostly focused on the land.

Violence between the two camps occurred and was devastating and a meagre peace treaty was signed, ending the war in 1657 AN.

Chisakute Hayai Manufacturing launched its first car, the Hayai, meant for the consumer, instead of focusing on military hardware. It became the prime rival of the Heimatmobile and one of the export products of the Empire during the 1660's.

The Union States ended the War of Lost Brothers behind relatively unharmed. The Florian Republic had been reduced to a desolate wasteland, Batavia had seen its fair share of violence, and a temporary breakthrough of Shirerithian-Natopian troops at the Dalmacijan front in northern Bangou had wrought havoc. Nonetheless, the direct material damage was limited in scope. The moral damage, however, had brought forth a crisis within the Jingdaoese administration.

The death of the Hai Emperor saw the rise of his sister on the Throne as the Meiyo Emperor. She was immediately confronted with the social unrest: during the war, several socialist and seperatist groups had attempted to launch a revolt against the autocratic state. The economy, focused on the war effort, now had to readapt to the consumer market. The highly centralised market structure, however, required a lot of input (both in lmanpower as funds) to adapt to the new situation. Confronted with a bankruptcy, the Empress welcomed - for the first time in Jingdao's history - Bassarid merchants and economists to the Heavenly Palace in Daocheng. The war had intertwined the Union's economies more than ever before, and with the opening up of (part of) the market, huge investments were made between the Union States. 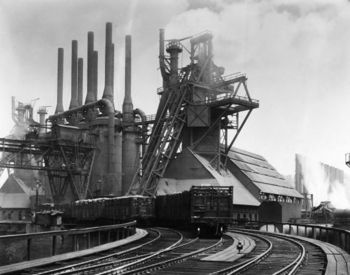 A newly constructed Bassarid blast furnace near Afrikania. Its access to newfound resources and export markets brought forth a boom.

With investments and know how imported into member states which had lagged behind, those states could offer a new source of revenue (customers) and labourers. Almost unsurprisingly, the markets flourished and a golden economic boom occured simultanously in Jingdao, Passio-Corum and Nova England. In 1671 AN, Krasnocoria became a full member and joined the common market, leading to an even further increase in economic growth.

The Kalirion Fracture, which occurred around the same time as Krasnocoria joining the Union as full member, further strengthened the trust in the Union and its economy. Several critics, now swayed by what was perceived as the superiority of the so-called Bassarid economical model, were eager to proclaim the Unions victory over the greedy imperialists. Inspired by those successes, many started to look beyond Micras, to the next adventure: space.

Dreams of a new era of space exploration soon faded along with the dynamism of the organisation. The loss of Krasnocoria amongst other members was a major blow. These woes culminated in a brutal civil war which gripped Jingdao after the sudden demise of the Chidao Emperor.

The unification of Jingdao and Cakaristan, combined with the accession of formerly neutral Batavia and the Thraci Confederation, restored a measure of dynamism to the USSO.

There are three different kinds of membership:

Full Members - or Union States - hold all privileges and duties, as being agreed upon in the Union Treaty (including free movement, Union Citizenship, military aid and economical access to the common market).

Observer States are allowed to send a representative to the Political Consultative Committee, but hold no voting power and do not actively participate in any of the projects.

Former Members are those which have left the Union after having enjoyed membership.

The Union Council of Commissars (UCC) acts as the highest executive and administrative body of the Union, being responsible for issuing decisions and orders on the basis and in pursuance of the treaties in operation. They also need to supervise the execution of those decisions. The Council is headed by the Chairman of the USSO and has a number of Commissars which are responsible for their own department.

The Political Consultative Committee during a joint meeting between representatives of the Union States, in 1690 AN.

The Political Consultative Committee is the assembly of the USSO and discusses changes to the treaties and oversees its execution. It assembles on the request of a Union State, whenever an issue is addressed that requires the attention of the whole Union.

Every Union State has an equal seat within the Policon, which also oversees the Commissars, but only Full Members receive voting rights.

The USSO Common Market falls within the responsibility and jurisdiction of the Commissar of Trade, who is responsible for the well-functioning of the Common Market mechanics. Union Members have access to the second largest economic market in the world, which is based on Bassarid economic theory, an economic system that stimulates production figures to break down down the protectionist policies of the individual member states, particularly of isolationist Jingdao. The post-war 60's and 70's of the 18th century proved to be two decades of unseen wealth, during which most Union States' economy expanded (while getting more intertwined) and living standards increased exponentially. Especially Jingdao and Krasnocoria enjoyed a period of unforeseen economic growth, with foreign capital and investments pouring in. 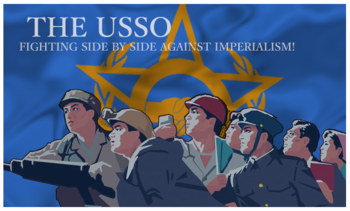 A propaganda poster of the USSO's commitment to each other.

The Joint Command, headed by the Commissar of Defence & Security, is responsible for communicating between the actions of the Armed, Naval and Air Forces of the Union States. The USSO was involved in the following number of conflicts:

The Common Cosmos Colonization Coalition, or 4C, is the official space agency. It acts as a coalition of individual space agencies, with the goal to explore space, establish space bases and eventually mine for resources on other worlds. The space program received an enormous boost, when under Krasnocorian and Bassarid impulse the States decided to closely cooperate. The seventies of the 17th century were dominated by an increase in investments into the sector, mainly supported by the economic post-war growth in that period.