Palesmenia is a nation located on the east Keltian continent in the general area known as "Micrasia", founded in 1665 AN. It is not bordered by any nations, although the nation of Juclandia was once in close proximity to the nation's southwest. The nation has a rich history, being the site of many grand nations such as Kampong and The Kingdom of Uantir. The nation's capital, Ábbad, sits on the former site of both these nations' capitals.

Palesmenia started as a world building project in mid 2015. It began with many paper maps, most of which are lost to the garbage can. The nation's was mostly kept isolated, apart from a failed state with a friend's nation. The nation mostly died off in 2017, but was soon revived in it's modern state in 2018.

Before the migration of the Palesh people to the Yákkón Delta Region, the people were confined to a semi-nomadic life in the Eastern Keltian Steppe. There, they lived mostly untouched by outside society. When the occasional nation would go into the area, they would migrate to an area that was not under control. This was until the Gúsnah Trénh, where Ergonian tribesmen wiped out Palesmenian settlements to the east of the steppe. This caused this group of settlers, then on being known as Palesmenians, to migrate south to the borderlands of Juclandia.

The starting point of modern Palesmenian history is after the Juclandians evacuated the far north of their nation, letting the Palesmenians move back to their new homeland of the fertile east. Don't be confused however, these tribes were anything but unified. They all (even to this day, we don't know the exact amount) had a deep hatred of each other. This was especially true with the 3 main tribal dynasties, the Yám, the Láu, the Gázar i Yáran, and the Pálesh. This was forever changed when the current Émprassi, Nasser I of the Pálesh tribe, waged a brutal campaign to unify all Palesmenians under his tribe's banner. The campaign ended when he seized Ábbad from the Láu and Akhman declared, on the 21st of Gálkubóa, "Our worries are now over! We have achieved what our ancestors couldn't!" From that day on, the mainland has been unified.

Soon after the flames of war were blown out, a team of surveyors calling themselves "Expedition 1" began exploring the islands close to the coast. Due to the recent collapse of Gerenia, many of their past colonies were discovered. They soon discovered this they found the former settlement of Dorme, which had previously been part of their colonial possession in eastern Keltia. The surveying team named the island "Átri" (English: Reef) after the reefs that were recorded to surround the island and has petitioned the government planning to send supply ships to the island to begin the construction of a small military installation. The current construction site has been labeled as "Snéshwiń-Varm" (English: Friendship Corridor). The construction is set to begin once enough workers can be brought to the site as well as the island being declared a "Military Area". Another crew later came upon the former Uantir ruin of "Queens Refuge" on the island of Angár. The survey team then later roughly translated this "Rnâdár e-Kenzie" (English: Refuge of the Queen). Many other small islets were found, the largest of these lying northwest of the city of Mánázar. Although the island of Aydaria was spotted, it was deemed "too risky" to land on by the survey operator due to the distance of the island from the mainland. However, landing were to commence "in the near future." This finally happened in late February of the next year, when pioneers landed and founded the city of Nasir'i Vyurmá.

In 1673, the Palesmenian nation went to war with the Lákarpa Bandits in what would be known as The Long March West. After the displacement of many Lákarpa people in the wake of the PDF insurgency. Many of these displaced people migrated north, and, in somewhat of an ironic twist, after pleading the the same government that had destroyed their old home, joined Palesmenia as the Lákarpa S.A.R. 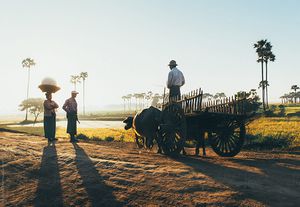 The geography can be descried in one word: flat. There are no major divisions in the terrain except for the mighty Yákkón River that infamously only has 3 bridges over it. The nation is very wet, allowing for plentiful harvests of crops, especially rice. Due to this, if a farmer is skilled enough, he may double crop to double the amount of rice that he can harvest, making them more money and feeding more people.

Rice is a significant export product for the Palesmenians. In early 1670 AN (175 NDS), the government signed an agreement with the Iron Company, which established a trading post and warehouse complex in Palesmenia in order to ship rice across Micras.

With the country ruled by the Émprassi, many executive powers are directly under his thumb. However, there is an elected parliament, called the Nadcraši, ran by prime minister Váshir Léh. With this, however, only certain, imperially approved, parties may run. This doesn't stop underground political clubs from springing up. One of the most infamous is the KKHAHK (Communist Club of Workers of Former Kampong) and its armed wing, the KAT (Kampongese Workers Army). Much communist in the nation comes from the notable Kampongese population, for which their nation was a one party communist state. However, with the end of serious civil strife, this party was banned. Since then, politics within the state has remained organized. Since then, newer parties such as Socialists have come into power. Other movements such as the RPK have gained following due to their anti-war attitudes and promises for worker's benefits. On the 7th of Tánelópdú, 175 NDL, it was announced Palesmenia had been given full membership status in the USSO.

However, due to the assassination of the Émprassi and the following actions the Nadcraši took in attempt to dissolve the position, a coup d'état 'was initiated by senior officials in the Palesmenian Defense Force. After several weeks of fighting, the remaining elements of the Nadcraši surrendered, and Minister of Defense of Palesmenia Thíno Wúlatet became the new head of state, establishing the Senior National Advisory Council as the new governing body of the nation.

The Iron Company expanded to Palesmenia in early 1670, when it signed an agreement with the Émprassi to establish a trading post and warehouse complex on the island of Angár. The main interest for the Company in Palesmenia is the significant rice production of the nation, which is shipped all across Micras, especially to Eura and Keltia, where there exist significant shortages of food. Palesmenia is also a market for steel, which the Company produces. However, in 1675, Palesmenia withdrew their membership after an economic boom, allowing to produce the nation's own steel. The ingratitude of this action angered the Iron Company Governor-Representative, and the Company merchant took several barges with rice with them upon departure. The prime minister, Zarni Thu, remarked at a press conference "Barges of rice is a good trade off to a whole warehouse complex. I'm surprised that they were so sparing in comparison to the their treatment to the Ralgons." Soon after the departure of the company, a group of settlers on the island moved into the complex and named their new home "Vésilísco". 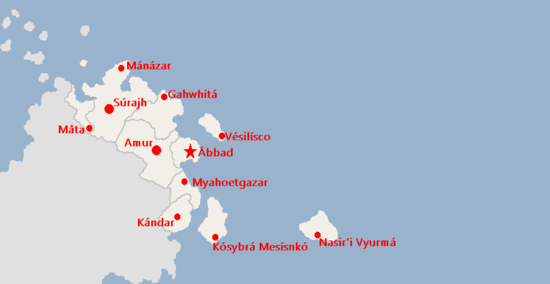 Map of Palesmenian Provinces as of the 22nd of Tánelópdú, 175 NDS
Retrieved from "https://micras.org/wiki/index.php?title=Palesmenia&oldid=193227"
Categories: