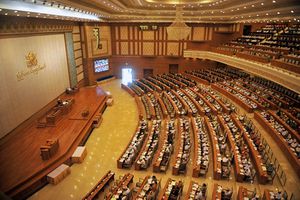 The house of the Nadcraši

The Nadcraši (ENG: Assembly) is the official legislature of Palesmenia.

The Nadcraši was established by Nasser I after pressures from his advisory council to form a democratically elected assembly that can check and balance his powers. After threatening the execution of those who suggested the idea, he reluctantly accepted. After the 1684 Palesmenian military coup, the Nadcraši was dissolved after Thíno Wúlatet ordered it to be shut down after attempts were made to pass motions that would abolish the monarchy and diminish the role of the military, with its roles being filled by the Senior National Advisory Council. Despite this, in 1692 AN, the SNAC votes to reinstate the Nadcraši, after 8 years of it being dissolved.

Originally, the house is to be headed by the two parties who have had the highest number of votes from the election. The other parties are to be labeled as the opposition, who are to either work with, or against the head party. They are to have less seats than the head parties. However, after the house's reinstatement in 1692 AN, only 2 parties were permitted, those being the Reforástas (Reformists) and the Consérvátas (Conservatives). 47 seats were allocated, one for every electoral district.

The House's duties are to put in place and govern the democratic laws of the nation. The house may appoint Secretaries to the departments of the government. The house may also impeach these officials if a majority vote is reached.

The Intiudalká Artima'la edi Nadcraši is a set of articles published monthly by the house. The articles mostly concern international matters. This is to better educate the people on what is going on around the world at that time. It's contents can be found here.