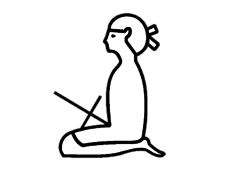 The religion was conceived at a time where the Palesh people still lived in the East Keltian Steppe, thus the locations in the story are located there. The belts of cities on the steppes of Eastern Keltia had always been divided religiously ever since people had first began to inhabit the area. Religions ranging from Pagan Animism to Umraism were practiced. However, a group who called themselves "The Prophets of Nárhit" began preaching the words of Nárhit, preaching how his teachings would cleanse the world of sin and treachery, how the world was in chaos because people would not embrace the peace that Nárhit's teachings would bring upon them. The religion began gaining traction, as swathes of people began converting to it. 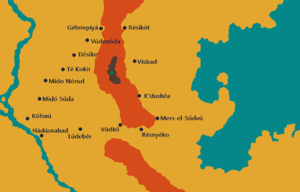 The map of towns/cities Nárhit visited in his journeys

The king of the gods, Ánu, received a prophecy that, before long, a single man would overtake his popularity. Angered, he sent upon a famine that would decimate the steppe cities and nearly destroying the Palesmenian way of life. This lead to many people abandoning their artisan way of life and becoming traders, wandering the steppes in the hopes of scavenging food for their families.

The Story, In Short

Nárhit, a steppe trader looking for food, was contacted by an old man in the inner quarters of the city of Vísbad, who told the young trader of a Héhod, a small sun made out of many pieces located in several cities throughout the steppe in return for the location of a secret grain warehouse. Nárhit decides to go on this quest and goes to many cities and gets the peaces, except for at the city of RésiKót. When he reports back to the old man that he could not find the last piece, the man kills Nárhit. It is then revealed that the old man had the last peace, and wanted to get the rest of the pieces from the young trader This lead to many people treating this man as a martyr in the struggle for survival. His popularity caused many people to abandon the way of Ánu.

The books of Nárhitihnism are divided into 2 categories, Pérkihatas (texts taking place during Nárhit's lifetime) and Yékerhatas (texts taking place after Nárhit's death, mostly compiled by the Prophets). Before the printing of books had became widely adopted, these texts were inscribed on thin clay tablets, and passed down by word of mouth from bards in city centers (a tradition that still exists to today in many rural centers in Palesmenia)

The chapters of the Vyúda Nárhiti are known as books. Each detail Nárhit's journeys in each city. Here is a summary of what he did in each city to find each piece, in order (Note that many of the names are derivied from Fánfá Palesh, an old version of modern Palesmenian):

There are many canon prophets of Nárhit. It is disputed if any of these people were real, but religious scholars accept them as real. Dates are given in the traditional religious dating system, as even rough AN dates cannot be determined of when these people lived.

Over the many centuries that the religion spread, many schools and branches of the religion were created, as people interpreted Nárhit and his Prophet's words in their own ways.

of their teachings go against the teachings of Nárhit.