From MicrasWiki
(Redirected from PDF)
Jump to navigationJump to search

The Palesmenian Defense Force (Palesmenian: Palesmenijna Defensyé Trebós, formerly known as Palesmenijna Armitká Trebós) serves as the armed forces for the nation of Palesmenia. It was founded by many high-ranking generals who personally served Nasser I Akhman during the unification wars. A 2 year conscription period is required for every adult over 18 years old. Following the 1684 coup, the military was restructured, with high ranking ministers replaced with those loyal to the new regime.

Begining in late 175 NDS, the Palesmenian Defense Force began a sequence of missile tests in the Taylor Bay launched from CBA-145. This was in response to a commission by the Nadcrasi to further develop weapons systems for the PDF. Later on in 1679, more missiles were launched northward into the bay. These missiles had small explosive payloads, and were launched towards dummy ships to test the missile's targeting systems. The testing program was terminated in 1687, as it was scene as an unnecessary waste of resources. 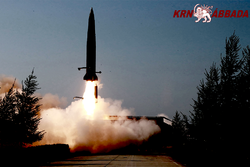 The Edyúsaki Térisbandá was the presence of the PDF within the Nadcraši. This was met with opposition by the left-wing parties, believing that the right-wing parties would swallow their votes. However, the party had no seats in the Nadcraši. They did, however, have observer status, meaning that they bring up issues to debate on, but have no voting power. The party wasled by Máséko Ánzina, a high ranking officer within the PDF. After the government restructuring after the coup, the party, like all others, was dissolved.