Gerenia (Gerenian: Gherenia) was a micronation located in the continent of Apollonia. Founded on 8 July 2012 as the Gerenian Colony of New Calarma, it gained independence as the Republic of Gerenia following the withdrawal of all claims on Earth made by the Gerenian government.

In the Gerenian language, both the names Gherenia and Gherenslen. Both versions of the name are used in the country; however, Gherenia is preferred by the government.

Before being founded as a micronation, Gerenia existed as an exercise in imagination. Gerald Ruze, being fond of geography and geopolitics, created a country in his mind with recreational purposes, along with a national history and culture.

This nation (which was called Lergenia from 2004 to 2009, to later change its name to Gerenia) was useful as a spatial and time framework to many of the stories that Ruze wrote during the period.

On 5 December 2011, Gerald Ruze founded the United Gerenian Republic as a micronation. It was based on planet Earth as well as on the imaginary possessions (referred to as Meeredres since the foundation of the United Republic). Nevertheless, by February 2012, the Meeredres was practically abandoned, and the name of the nation was replaced with the current denomination.

In July 2012, the Gerenian government formalized its land claim in Micras, with the aim to establish the Gerenian Colony of New Calarma (Gerenian: Kozongherenies'ad Kalarma Nozes). New Calarma, directly ruled by the President of the Republic, enjoyed the status of colony since its foundation (8 July 2012) until the cessation of activities of the Republic on Earth (also known as the Partial Dissolution), occurred on 2 November. This turn to simulationism implied New Calarma to become the only Republic of Gerenia as an independent state, with Ruze as President.

In April 2013, Gerenia expanded its territory by annexing Helfrich Island, located in the Northern Sea.

By the end of the year, an economic crisis burst into Gerenia, caused by the tension with Meeredres. Upon threat of invasion, Gerald Ruze dissolved the Gerenian State and later left the country. The suspension of the institutions, known as the December Anarchy, lasted one month. Eventually, the conflict with Meeredres was solved, and Ruze returned to Gerenia in the last days of 2013. Since then, all efforts of the nation were dedicated to industrial development and territorial expansion.

After years of development, in the spring of 2018, an acute increase in the price of potatoes triggered a series of protests in mainland Gerenia. General displeasure of the population about the government policies during the years of territorial expansion and the whole political system, combined with bad harvests in 2017 and 2018, and the failure of the infrastructure –built too rapidly– in many cities, among other factors, worsened the situation. During mid-2018, Gerenians from Apollonia and the overseas territories began to flee en masse to unknown destinations, and the Gerenian State was dissolved.

Roughly a half of Gerenia's terrain is composed of hilly territories. The Adarman Highlands dominate the south of Gerenia, with the Ĵarga Mountain Range reaching above 2,000 m, and the highest point at Mount Tankberg (2,225 m). The northern lands are low, as they are part of the Camoleo Plains. Nearly two thirds of the country are covered with conifer forests.

Gerenia's southeastern border is formed by the Camoleo (known as Samarne in Gerenia), the second largest river in Apollonia. Other major rivers are the Ghereset, the Red River, and the Maiŷnat.

Mainland Gerenia is located in northern Apollonia, bordering the Northern Sea to the north, and the Camoleo to the south-east. 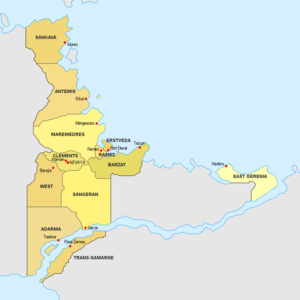 Provinces are divided into districts (deskereke) or counties (komdati), the latter being special subdivisions, created with the aim to facilitate administration of "special" zones. At the moment there are 34 districts and 6 counties.

The city of Nevaya is the seat of the government, located within the Gerenian Capital Territory.

Gerenia is a federal presidential republic, where its provinces are autonomous, but the rest of the administrative divisions of the country exercise the powers that either the central or the regional government delegates.

The first Constitution that Gerenia had was written and approved in late 2011. It was reformed several times since then. The most important amendment gave the then Colony of New Calarma the status of independent republic.

The Executive branch consists on the President of the Republic, who is the head of state, and several Ministers appointed by them. The Legislative power is exercised by the Parliament, which is a bicameral legislature. There is also a Judicial power.

The Gerenian Armed Forces consist of Land, Air, and Naval Forces, and are led by a Commander-in-Chief who is appointed by the President. During wartime, the president is the Supreme Commander of the Armed Forces.

Sports in Gerenia play an important role in the nation's society, and the country has a strong sporting history. The most popular sport in Gerenia is football, which is an important part of Gerenia's culture. Hetlöhi, as well as Gerenian rules football, are two sports invented in Gerenia. Other discipline played professionally or semi-professionally include ice and field hockey, rugby, athletics, tennis and sailing.