Trans-Samarne was officially created on 14 November 2015, when the Gerenian government expanded its borders towards the south-east, across Camoleo River (called Samarne in Gerenia). The areas claimed by Gerenia had been occupied for at least six months before the creation of the province.

The main reason behind the expansion was the exploitation of the mineral deposits of the region. During 2015, even before the settlement of Gerenians across the Camoleo started, Jan-Gebreel Mesonau, then Gerenian Minister of Defence, opined that the new border would need a defensive infrastructure. He studied the topography of the area, and planned the creation of a defensive line, the Mesonau Line. The borders of Trans-Samarne were drawn following the design of the Mesonau Line, and not in the reverse order.

Mesonau was appointed as Governor of the province when it was founded, but resigned four months later. 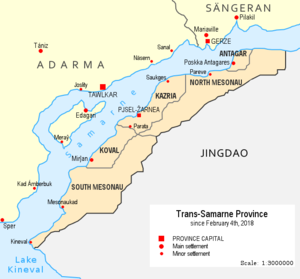 Map of Trans-Samarne since 4 February 2018

In the initial stage of the expansion, which occurred in November 2015, three sectors were formally occupied. The sectors were separated by unclaimed territory. In the second stage, which would not be carried out, the province would expand so all the lands in front of Adarma and Sängeran ("Cis-Samarne") were under Gerenian rule. The north-eastern banks of Lake Lamantia (called Kineval in Gerenia) would also be occupied.

Nevertheless, on 2 January 2016 the Holy Grand Empire of Jingdao established the Kingdom of Batavia in the lands south-east of the Camoleo. By request of the Gerenian Ministry of Foreign Affairs, the government of Jingdao agreed to negotiate the transfer of Mesonau and Pareve to Gerenia.

Finally, in January 2018 the province was expanded thanks to a negotiation between Jingdao and Gerenia in the context of the peace treaty with the Florian Republic. Gerenia ceded Misnir to the Empire of Hondon, and received land from Jingdao next to the province.

Most of the territory of Trans-Samarne is located within the Adarman Highlands, while the nothern end belongs to the Samarne Plateau, and has a hilly relief. The average altitude of the province is 800 m. The highest peaks are located in the Muret Mountains, in the southern section of the province.

Mining is the main economic activity in the province. From the mountains, lead and copper can be extracted. Fishing is allowed in Antagar District (north) only.