Hetlöhi (pronunciation: /hɛt'lœ.hɪ/, English: Seven points) is a sport played by two teams of six players on a rectangular court. The objective is to score seven points. This is made by getting six balls into six "receptacles" located at each end of the court. The seventh point marks the end of the game, and is automatically awarded to the first team to score six points. Players can use any part of their bodies to score points, though there are limitations.

Hetlöhi is one of the three national sports of Gerenia, the other two being association football, and Gerenian rules football.

Hetlöhi was created in 2011 at the No. 9 Middle School in Victoria, Erstveda by two students, named Jan-Länar Ereson and Mikel Turne. Ereson and Turne used to play a game consisting in throwing three balls into three buckets, similar to basketball. They tried to play it at school, but since they did not have buckets, they drew circles on the gymnasium wall with chalk, and scored their points by making the ball touch the circles.

The game soon became popular in the No. 9 School, with many students playing their own versions. Because of this, Ereson, Turne, and some of their classmates created a set of universal rules (most of which apply for the standard game), and gave hetlöhi its name.

It is widely considered that the first "universal rules" hetlöhi game was played in Victoria, in early 2012, as part of a sixteen-team tournament. Unfortunately, the results of such competition are lost to history.

Hetlöhi gained popularity in Victoria and Port Elerat rapidly, and began being practised by people of all ages. Some of the first hetöhi teams went on tours around Gerenia, playing exhibition matches, teaching the game to others. However, the Isherwood province (today Erstveda) remained the region where hetlöhi was best received.

Several amateur tournaments were organised and run at local, district, and even provincial level, as hetlöhi associations and clubs began appearing in the country.

The Comets and national recognition

In 2013, seeing the rise of hetlöhi in Isherwood, a group of local associations attempted to create a body to unify them all, regulate the clubs and competitions, and make the game professional. The "Strazal Hetlöhies Gherenslenmedre'es" (Hetlöhi Association of Northern Gerenia) forwarded their proposals to the Ministry of Sport with the aim of receiving support and assistance. The Ministry responded by assembling a hetlöhi team, named "Comets", to play other teams.

The "Comets" turned out to be arguably the best team in history. There were former basketball and handball players in it. The "Comets" made excellent performances in their first matches, earning admiration from the audience. The team continued to play and defeat any opposition, thus constructing a fame as "invincible". They began being called "The Machine", and "The Bulldozer", as rivals seemed to have no chance of beating them. Following a rapid succession of easy victories, the Comets' coach stated that if his team was ever defeated, it would be disbanded.

Finally, after 40 consecutive victories (five of them achieved within fifteen minutes of play), the Comets lost to a Barzat team 7‐4 (after three victories in four days). The experiment of the Ministry of Sport ended, and the team was dissolved. Later, the Ministry approved the sponsoring of hetlöhi through the Strazal Hetlöhies Netoles (SHN, National Hetlöhi Association), as the rulebook was slightly altered.

Hetlöhi was declared national sport of Gerenia in September 2014, as a measure to gain more interest from people throughout the country. 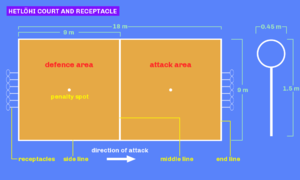 Games are played without time limitation, but brief stops are allowed every ten minutes.

Six players from each team may be on the court at the same time. There are a maximum of three substitutions. Teams also have a coach, who oversees the development and strategies of the team.

A standard uniform consists of a pair of shorts and a jersey with a number (from 1 to 9), unique within the team, printed in both the front and back.

A regulation hetlöhi court is 18 metres long and 9 metres wide. It is divided into two areas, which each team calls "defence area" and "attack area", separated by the middle line. There may be only three players of a team in each area. The penalty spot is located in the centre of each area.

The six receptacles are situated at each end of the court, 1.5 metres above the "end line". The separation between receptacles is of 50 cm, while the hole is 45 cm diameter.

The object of the game is to outscore one's opponents by throwing the ball through into the receptacles while preventing the opponents from doing so on their own. An attempt to score in this way is called a shot. A successful shot is worth one point. A point can be earned when shooting from the penalty spot after a foul is made.

A game starts when the main referee bounces the ball between two players who stand at both sides of the middle line. The first player to catch the ball after it bounces may start playing.

Each of the six points must be scored by six different players, it is to say, six players must score one point each to win the match. Because of this rule, it is of common practice that, after a player has scored a point, he/she switches places with a teammate of the defence area or a player who is on the bench.

There are three kinds of infractions: minor, "light fouls", and "hard fouls".

Examples of minor violations are: touching the ball with the wrong part of the body, moving anywhere while holding the ball, or holding it for more than three seconds.

Light fouls result in being forfeited possession of the ball (if the player who committed the foul was attacking). Stepping on the "end zone" or the opposite area, and switching players between areas in a wrong manner are considered as light fouls. Making two minor infractions in less than a minute is sanctioned as a light foul, as well.

Hard fouls are the most serious infraction type, and they result in conceding a "penalty shot". The penalty shot consists on a free throw made from the spot in the centre of the area. Misconduct, for example, is considered as a hard foul, and may result in disqualification.

The supreme governing body is the SHN (Strazal Hetlöhies Netoles, English: National Hetlöhi Association). It is composed of all the hetlöhi clubs that have been admitted into it thorugh an application process. The member clubs are sometimes referred to as "(SHN-)affiliated clubs". The SHN organises and runs all official competitions in Gerenia, and has the power to modify the rules of the game. As of 31 October 2014, 28 of the 110 existing clubs are SHN-affiliated. Erstveda and Ramez, the provinces where hetlöhi is most popular, have their own provincial associations.