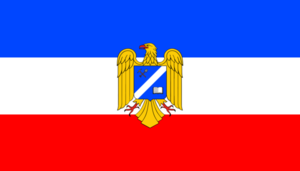 Gerenian nationalism is the ideological movement for attaining and maintaining identity, unity and autonomy on behalf of a population deemed by some of its members to constitute a Gerenian cultural unit of population with a separate homeland, shared ancestral myths and memories, and a public culture.

The Gerenian People is not composed of a single ethnic group, but of eleven (commonly called "races", though other denominations given are "species" or "tribes", depending on the author). The eleven original tribes have a common origin on planet Meeredres. During 2007-2009, the tribes unified, thus forming the Gerenian Nation.

The political union was accompanied by the social and cultural union of the tribes: many customs were universalized. A national identity began being created.

In 2012, it was founded the Republic of Gerenia on Micras (as the Gerenian Colony of New Calarma). The pioneers carried to the new country their culture, which was modified because of the geographical features found in New Calarma, as well as the customs of the peoples encountered in their territory.

The growing distance between New Calarma and Meeredres had an important role in the appearance of Gerenian nationalism. The declaration of independence of the Colony (as the modern Republic of Gerenia) bosted nationalism, and gave a stronger meaning to it. The colonial symbols were replaced by new ones, to reflect the identity of the new Republic.

Nationalism has played a significant role in Gerenian politics since the declaration of the Republic, in September 2012. Currently, parties identifying themselves strictly as nationalist are the ruling Independent Party of Gerenia, and the Reformist Party.

Gerenisation is a social and cultural process which aims for the elimination of "foreign sign or influence in the society and the culture" of Gerenia. Gerenisation encompasses a number of proposals, among which the most important are:

Gerenisation commenced with the definite changes to the Gerenian language, and the name changes suffered by Clementsgrad (first to Clementsskad, then to current denomination Klämen). Both steps were well received by the people, however, the newest projects have been finding opposition even within the very Independent Party.

The influence of nationalism in everyday life is particularly noticeable in the sporting activities. When the first sport associations were founded, the Ministry of Sport prohibited or greatly limited clubs from hiring foreign players. This was made to stimulate the practice of various sports by Gerenians in first place, and to make easier for coaches of national teams to choose the players for their teams. Between 2013 and 2014, restrictions were lifted, nevertheless, football clubs cannot hire more than three foreign players per season, and they cannot have more than six foreign footballers in their roster at the same time.

Apart from the restrictions for foreigners, several football clubs have signed an accord to "prefer" the inclusion of Gerenian-born players over foreign-born ones.

In recent months, the Gerenian government contributed to the expansion and development of hetlöhi and Gerenian rules football, and declared them national sports of Gerenia.