The demography of Gerenia includes such measures as population density and distribution, ethnicity, etc.

Based on the 2018 census, Gerenia's population is 8,111,839, a 9.18% increase from the 2017 census. The population growth between the foundation of Gerenia in 2012 and the 2018 census is 88.22%. This high rate can be attributed to massive immigration from Meeredres and the inclusion of people from unclaimed lands into Gerenian territory. The immigration from other Micrasian nations, however, has had little impact in Gerenia's population. 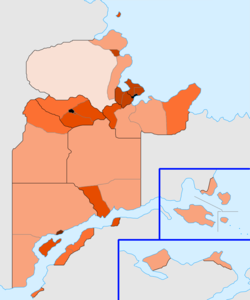 As of 2018, Gerenia's population density is 6.99/km2. During the Gerenian settlement, most of the people went to live to a few cities. This has been reflected in every census conducted. As of 2016, roughly 90% of Gerenians live in cities (according to Gerenian law, settlements with at least 2,000 inhabitants), and particularly one out of five Gerenians live in Elerat Kad district, which comprises Port Elerat and surrounding towns. Until 2014, it was one out of four.

The population is concentrated in the cities along the Northern Sea and major rivers, namely: the Camoleo, the Maiŷnat River, and the Red River. In contrast, the regions with the lowest population density are forest-covered Maremedres province, and the mountainous lands of the west and south of the country.

Migration has played a vital role in the foundation of Gerenia and as such it has influenced the nation's culture and identity. The first Gerenians arrived at Micras through a government program called Operation Exodus. Since then, the national government has organised and controlled practically all flow of people in the country (firstly through the Ministry of Population, and later through the Ministry of Foreign Affairs and Immigration).

Internal migration within mainland Gerenia occurs at a small scale (roughly 11,000 people moved their residences during 2016), and in many cases consists of people moving from a big city to a smaller, nearby one. Medium and small cities usually offer bigger houses and a more relaxed lifestyle than Port Elerat or Klämen, where a number of apartment buildings and housing complexes were built to house a population in rapid increase.

However, with successive expansions of Gerenian territory, another type of internal migration happens at a larger scale. The creation of new provinces, republics and overseas dependencies meant that people had to go live in those places. The government encouraged the people to move to the new territories, often granting them work. There aren't official statistics on the matter, but it has been said that no less than 200,000 Gerenian citizens have moved from through these "transmigration programs".

As of 2016, 11.6% of the total population are Micrasian natives. Most of them used to live in unclaimed territory that was later annexed to Gerenia, and they chose to live in the country. These are the so-called "Let-ilbed" (which in Gerenian language means incorporated [ones]), and can usually be found in rural areas and small towns, though a growing number of them are working in the industrial sector. Many let-ilbed have already gained Gerenian citizenship.

Emigration from Gerenia has to do with work and study opportunities in almost all cases. The number of Gerenians living abroad has been estimated in 13,000, and the number of people who emigrate each year is slowly increasing.