The territory of Gerenia has been inhabited for many years before the arrival of the Gerenian People from Meeredres, their planet of origin.

Gerenia was founded in July 2012, as the Gerenian Colony of New Calarma. Since then, the country has struggled for becoming an economic and militar power in Apollonia, however, a weak government and a crisis in late 2013 have delayed the achievement of a sustained development.

Human settlement in the area dates back to the days when Treesia expanded to Northern Apollonia. The Treesian culture flourished in the lands north of the Camoleo. The whole region later fell under Slobovian control.

After Slobovia was disbanded, Novaya Zemlya was founded. The nation reached a high level of development, as some of its cities' ruins have been preserved (and, in some cases, Gerenian cities were founded upon ruins of such settlements, for example: Mariaville near Jiangshan, Balyada on Vilchermansk, and San Andrés on Zhivagovsk). Following the end of Novaya Zemlya, a number of its former citizens migrated in different directions, while others stayed, and the land remained unclaimed until the establishment of Landingberg, a constituent nation of the United Empire. According to the census conducted in Gerenia during late 2012, approximately 9% of its inhabitants are of Novaya Zemlyan descent.

Other nations that were established in the area were Amoria, the Students' Isocratic Oligarchy of Yabloko, and the Republic of Kozuc. The latter was dissolved soon before the arrival of the Gerenian people in Northern Apollonia. 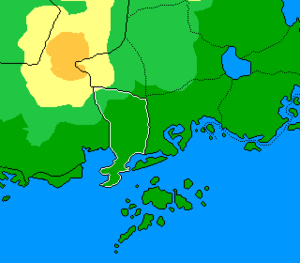 The establishment of a territory in Micras was an objective first proposed in April, 2012. The authorities in Meeredres considered a colony in Micras as an opportunity of expansion, increase of activity, and interaction with foreign Nations. After an agreement of the Meeredrian politicians, it was designed a Colonies' Act, as it was called. The Colonies' Act was approved in 19 April.

At the same time the Act was being drafted, the Meeredrian government (through a special Commission) ordered the gathering of great amounts of materials in order to build cities and the infrastructure of the colony to be founded. The Meeredrian citizens were offered the opportunity of moving to Micras with the government's support. The Operation Exodus was taking shape.

With regards to the location of the Micrasian colony, the Colonies Commission chose a region in Southeastern Apollonia, southwest of Antica, and close to the nations of Freedomia and Havnesgade-Amager. However, by the time the application was sent to the MCS the land had been regained by Flanders, and the Colonies Commission considered other places. Finally, it was chosen a region within Northern Apollonia.

On 8 July 2012, the MCS approved the establishment of the Gerenian Colony of New Calarma in Micras. The colony was named after the Meeredrian region of Calarma.

New Calarma was founded in Apollonia, between the nations of Safiria and Kyrovistan. Clementsgrad (the second largest city in the territory, now Klämen) was designed capital city. Other major cities constructed before the official foundation were: Port Isherwood (now Port Elerat), Tawlkar, Ramez, Mergeazes, Gerze, and Taizun.

New Calarma soon adopted its own Constitution, similar to the one of Meeredres, which implied that federalism became its form of government. Gerald Ruze was proclaimed Governor of the colony, while Sheila Toscano and Clemente Ruiz were appointed Governors of the autonomous regions of Mayfield and New Adarma, respectively.

The colony began a process of slow but sustained development thanks to the imports received from Meeredres, some of which were utilised in an attempt to establish heavy industry in the country. Tawlkar began emerging as a major mining centre, as the Midlands saw the rise of agriculture.

However, in spite of the dependence on Meeredres, Ruze declared the independence of New Calarma in November 2012, and withdrew all Gerenian territorial claims on planet Earth. Since then, the relations between Meeredres and Micrasian Gerenia grew colder.

Dissolution and Reestablishment of the State

In October 2013, an economic and social crisis broke out in Meeredres. All the economic sectors were affected, and the government of that time announced that there would be no more exports to Micras. Once such measure entered into effect (and after frustrated attempts of negotiation), Ruze dissolved the Gerenian State. The Nation fell into anarchy.

Ruze submitted a removal claim to the MCS in 27 November 2013, in order to formalise the dissolution of the Gerenian State. Some Governors and Ministers of the Republic fled the country, being followed by a number of people. While many returned to Meeredres, others migrated to nearby nations. However, most of the population chose to stay in Gerenia, waiting for the reestablishment of it. Ruze, by his part, was granted asylum in Neo Patrova, Hamland. He was then appointed Governor of San Luis de Hamlandia.

By mid-December, thanks to Joseph Ruze (Gerald's cousin) taking into office as head of the Meeredrian government, the return of Gerenia was finally open to negotiation. Gerald Ruze left Hamland, and traveled to Meeredres, where talks began.

The Gerenian State was officially reestablished on 30 December 2013, although the territory claimed by the Republic went smaller.

After the end of the anarchy period, the Government of Gerenia increased efforts to develop the country, and also tried to maintain the people united by exalting nationalism.

The Gerenian State continued to expand: first, it finished recovering the lost territories by July 2015, and towards the end of the year, it were created both Trans-Samarne Province in the eastern banks of the Camoleo, and East Gerenia in the estuary of such river. Later, following the doctrine known as Asakar Méeres, a number of territories outside mainland Gerenia were founded.