After an hiatus between 2003 and 2004, the Republic was rebooted as the Second Democratic Republic of Flanders on October 2nd, 2004. A second hiatus occurred between August 2011 and March 2012. On March 4, 2012 another reboot took place: presidential and parliamentary elections were organized in April 2012. In 2014, a constitutional referendum was organized to federalize the Republic. This led to the Third Republic, officialy the Federal Republic of Flanders.


It was the first Dutch speaking micronation, and is currently the oldest in continuing existence.

Flanders was founded on November 29th, 1997 by Gert Geens, with himself as first President. It would remain in continuing existence for over five years. This period is called the First Republic.


Major political themes during this area included discussions about the powers of the President as well as the question of what should be the status of the Dutch language. Initially, Flanders had two official languages, Dutch and English, with English being the language of law and politics. This situation was soon to be criticised, resulting first in Dutch being upgraded to the same level as English, and in the end to be declared the sole official language. As to the first question: the Flemish president initially had a very powerful political position, but this was gradually eroded by successive constitutional reforms, resulting in a presidency that was de facto largely ceremonial, with some remaining judicial functions. During that later period, executive power was essentially vested with the Chancellor (prime minister).


One structural characteristic of the First Republic was that its name attracted a lot of macronational Flemish nationalists (in favour of the breakup of Belgium and the independence of Flanders) from all sides of the political spectrum. Although the Republic would never present itself as a seccessionist organisation or claim to represent (macronational) Flanders, it is fair to say that this often defined the political atmosphere and was by many perceived as at least ambiguous. This became a burden in the the intermicronational relations of the country, as this ambiguity lead it to being rejected as a member of the United Virtual Nations Organization (UVNO) in 2001. Similarely, the refusal by the LoSS to admit it as a member was caused by the Republic's image as being linked to Flemish separatism; it is important in that regard to note that the league's secretary-general was Thomas Leys, a macronational Fleming.


The politically most active period of the First Republic was probably situated between late 1999 and 2001, with heavy polarisation, during which the Geens' conservative VND, the political party generally associated with power, was very much the punching ball of the opposition. This is also the period during which Flanders witnessed the only grave treath to its national security, when in February 2000, the German speaking Free State of KLE (Freistaat KLE) showed signs of planning to hack Flanders' infrastructure, after (intentionaly?) misinterpreting some declarations by a Flemish opposition leader. The threat quickly dissipated when KLE simply lost interest and focussed on yet another victim. Nevertheless, this lead to the creation of the Flemish Defense Unit (Vlaamse Defensie-Eenheid), Flanders' only official military, essentially intended to be prevent practices such as hacking and flooding.


After a period of societal inactivity, a final attempt to boost activity was made at the instigation of relative newcomer, Frans, with the Open Flemish Convention (Open Vlaamse Conventie or OVC), where all citizens were invited to evaluate the fundamentals of the Republic. However, despite some initial debate, the OVC did not amount to anything, slowly died out, and the First Republic with it. A final attempt at revival was made when Ben Veraart attempted a military coup on March 11th, 2003, but failed - the date conventionally considered to be the last day of the First Republic.


In the summer of 2004, former Chancellor Erwin V.H. took down the Republic's website, leaving only the message that the Republic had ceased to exist. Much too his surprise, he was soon contacted by former MP Wolfgang Thoma. After some discussion, they contacted as many former citizens as they could to discuss a possible revival. A month of intensive discussions followed about the exact way to relaunch the Republic, but also about ways of preventing citizenship fraud. It is during this period that the typically Flemish distinction between Confirmed (Bevestigd) and Unconfirmed (Onbevestigd) Citizens arose - the former being citizens whose existence has been confirmed by three (later two) other Confirmed Citizens, thus receiving more votes during election time. This feature has continued to exist, partly enhanced by the threat of communist infiltration during the Cold War of 2004; the discrepancy between the numer of votes between Confirmed and Unconfirmed Citizens has diminished, though (currently: 5 vs 30 votes).


Finally, on October 2nd, 2004, the Second Republic was officially born. It was given a provisional charter, providing for a Citizen's Forum (Burgerforum), composed of al citizens, to act as a provisional legislative body. Erwin V.H. was appointed as Provisional Head of State, and chose Thoma as his deputy.


The Citizen's Forum quickly came up with a Constitution in which the contribution of the nation's founder Gert Geens should be noted. Strikingly, the Constitution clearly defined the nation as purely micronational and explicetely rejected any ties with macronational facts or events (Article 2) - a deliberate act to avoid the confusion of the First Republic. The Constitution also provided for the instutional framework, which remained in place for 10 years untill the federalization of the Republic.

The first presidential and parliamentary elections were organized in January 2005. Both were won by the Social-Conservative Union ([[Sociaal-Conservatieve Unie or SCU), which received 26 seats (of 50) in Parliament. The Socialist Party (Socialistische Partij - Eenheid in Solidariteit or SP.ES) came second (14 seats), the Flemish Democrats (Vlaamse Demokraten or VD) third (6) and the communist Democratic Revolutionaries (DEREV) last (4).


During the course of 2005, the activity level of Mayo dropped significantly, leading its founder (and administrator) Joxin Diez to the conclusion that it could only survive as part of a larger entity. In December of that year, Flanders, Mayo and Charlotta joined the Low Lands Confederation (Confederatie der Lage Landen), which in practice also meant that Mayo and Charlotta were now hosted on the boards of Flanders, at that time the strongest of the three. The confederation soon succumbed to difficulties, a fact partially related to the ongoing loss of activity of Mayo and Charlotta and their loss of identity, as well as to institutional difficulties. Flanders ended the Confederation, which led to the disappearance of Mayo. The Confederation was not without legacy, as it did enable Flanders to absorb (most of) the remaining active Mayoan and Charlottan citizens. Because of this, Flanders once more held the monopoly on Dutch micronationalism, but this situation was short-lived, since Batavia was founded on February 6th, 2006.

Flanders has a presidential system of governement. On the federal level, the Union Chamber (Bondskamer) and the Council of Regions (Statenraad) represent the legislative power; the Union Chamber is elected by the people every four months, while the representatives of the Council of Regions are appointed by the regions (gewesten). The executive power is represented by the Union President (Bondspresident) and the Flemish government (Vlaamse Regering), who reside in the Ivory Tower. Every eight months, the President is directly elected by the people. The members of the judicial power (Rechtbank) are nominated by the President and approved by the Parliament. Additionally, there is a body called the Senaat (Senaat), which, despite its name, is not part of the legislative branch, but essentially functions as a judicial back-up and is composed of at most seven senior statesmen, appointed for life by Parliament at suggestion of the President.

Since the Parliamentary elections in October 2015, 20 out of 50 seats in Parliament are held by the League for the Third Republic (L3R), the Federation of National Parties (FNP, center) hold 19 seats and the list 'King, Faith, Federalism' (KGF) 11. The FNP is composed of the National Progress Party (PNV) and the Conservative Party, gaining 11 and 8 seats, respectively.

Flanders has a civil legal system. Law arises primarily from written acts and regulations; the judicial power is not to make law, but merely to interpret it. The laws of Flanders are codified in the Offical Journal (Staatsblad).

After long hesitations, Flanders acquired territory on Micras on August 27th, 2009. By law of June 18th, 2010, the territory has been divided into two provinces (gouwen): the Province of Ambetanterijk and the Bruswerpian Capital Province, hosting the national capital of Bruswerp (Bruswerpen). However, these provinces were for historical and cultural purposes only; they had no powers devolved upon them. Additionally, president Petrvs Fidelis has attempted to create another subdivision, the "Autonomous Heterodox Area of the Praised and Holy Saint Kalmoetza", to be administered by the Heterodox Church, of which he himself is the patriarch. This was, however, struck down by Parliament. 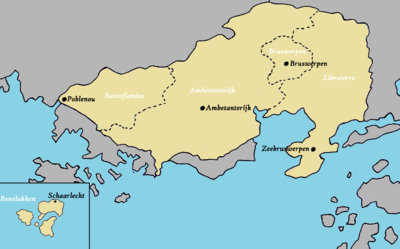 Map of Flanders and its five regions.

In 2014, the five regions (gewesten) of Flanders gained some autonomy, when the federalization of the Republic was approved by the electorate. The current regions are:

Furthermore, there are two territories (gebieden), which do not have autonomy:

The Republic of Flanders has long had an isolated economy. The banking infrastructure ran on the phpbanking-technology of Sander Dieleman from 2005 untill the end of 2010. The official valuta of Flanders is the Flemish ducate (VDK). A total of 1.000.000 Flemish ducates were minted.

After the approval of the Single Currency Unified Economy Treaty in December 2010, Flanders transferred to the Small Commonwealth banking system on January 1st, 2011 with 142.000 ducates to distribute. As of March 2012, the Flemish economy contains 163.405 ducats, a 15 percent increase compared to its initial capital.

Civil servants receive a monthly salary from the Departement of Finance, ranging from a 50 (vice-president of the Parliament) to 250 ducates (President).

According to Article 4 of the its Constitution, Flanders does not recognise any religious or philosophical doctrine as its state doctrine. Religion only has a minor role in the country's politics. The two main religions are catologism and heterodoxy.

The Flemish Catological Church has been in communion with its Batavian counterpart since the First United Concilium in 2009. Central to its doctrine that sins are praiseworthy, as they allows sinners to buy indulgences from the Church. Since the murder of the church founder, the Prophet and Successor of Cato Hieronymus Erasmus, the Church has been lead by Pope Erwin I. Presumably because both the church's founder as well as its pope are former Flemish presidents, their colleague Gert Geens once called 'the official state joke'.

Secondly and perhaps more seriously, there is the Flemish Heterodox Church, which holds a 'soft polytheistic' creed and describes its doctrine as 'fundamentalist syncretism', in that sence that its faithfull are obliged to simultanously adhere to another religion - any religion, as long as it isn't catologism. The church is headed by Patriarch Petrvs I, who also heads the KGF, a minor political party which, amongst other things, proposes making heterodoxy the country's official religion.