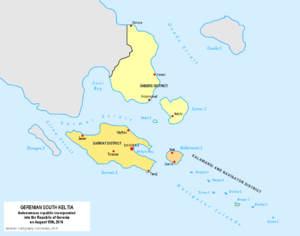 Gerenian South Keltia is located in the southern end of continental Keltia and comprises a number of islands in the Eastern Ocean, the most important of which being Sarmat Island, Lemar Island, Kalamansi Island, and the Navigator Islands.

The islands and the continental part of the republic feature coastal plains and mountain ranges. A number of peaks surpass 2,000 metres above sea level. The highest peak, named Kaira (2,910 m) is located in Sarmat Island. There are two main mountain chains: the Ruĵ Mountains, running through the Ánders Peninsula and Lemar Island, and the Kestția Mountains, which run through Sarmat, Kalamansi and the Navigator Islands. The Kestia Mountains feature several volcanoes, of which only two (Hestal and Rymnes) are active.

Located near the Equator, the climate is categorised as equatorial, being hot and humid throughout the year. Local climates are affected by the presence of mountain ranges throughout Gerenian South Keltia, and climate can be divided into that of the highlands, and that of the lowlands. The lowlands of northern Sarmat and eastern Ánders Peninsula have a sunny climate, with high temperatures (ranging between 22º and 30ºC). The highlands are cooler and wetter, with very high humidity levels.

Gerenian South Keltia is made up of three districts: Ánders, Kalamansi and Navigator, and Sarmat.

Gerenian settlement in Keltia started in January 2016 when Gerenian sailors reached an archipelago south-east of Keltia while seeking for shelter during a storm. They named the archipelago Navigator Islands, and disembarked in Kerpan Island (the biggest one of the group). Once weather cleared up, the sailors continued navigating towards the north, and found a bigger island, which they named "Kalamansi". Since Kalamansi Island was completely uninhabited, the sailors built a few rudimentary houses in the northern shore, with the intention of establishing there. The sailors then claimed Kalamansi and the Navigator Islands as Gerenian territory, and requested protection and support from the Gerenian government. A Commission (the Keltia Exploration Commission, KEC) was named by the President and the Parliament to analyse the situation and decide whether to found a colony in Keltia or not.

Creation of the Republic

The Commission arrived at Kalamansi on 12 March 2016, and stayed for three weeks before returning to Gerenia. The report written by the Commission after the meeting with the sailors was in general terms favourable, although the Commission strongly advised to claim lands in continental Keltia. However, the government gave the nod to the project, and the Gerenian flag was finally raised in Kalamansi on 5 May 2016.

The plans for the creation and organisation of the colony began immediately after the approval of the project. The KEC was reformed into the KSC (Keltian Settlement Commission), and Jan Ánders was designated head of it.

During the following three months, a number of Gerenians arrived at the region, expanding the territory claimed to Sarmat, Lemar and other nearby islands and a small portion of Miste Peninsula, in continental Keltia. Ten settlements were founded, the biggest ones being Darekau (the capital), Arel in Kalamansi Island, and Ándersskad in Ánders Peninsula. On 27 July 2016, the territory was officially named "Gerenian South Keltia", and Ánders was designated Governor. On 15 August Gerenian South Keltia gained the status of autonomous republic within Gerenia.

The main economic activity in Gerenian South Keltia is mining. Two state-run corporations, Ferrum SK and Alukorp, dominate the extraction of iron and bauxite (aluminium ore), respectively. Recently, it has been discovered deposits of tin in central Sarmat Island and in Lemar, and copper in Ánders Peninsula.

Agriculture is rapidly developing in the region, with the grasslands of northern Sarmat being suitable for cultivating rice. Tea and coffee have also begun being cultivated. As for fruit production, it is concentrated in Kalamansi Island.