The Protectorate Territory of Rúmla and Káša (Palesmenian: Strátapoténa Rúmla i Káša) is set to be a territory of Palesmenia on the Uískoma Peninsula, just west of the Lákarpa S.A.R. It has been occupied by the PDF ever since the end of Lákarpa War, and was opened to settlement on the first day of 1682 AN. 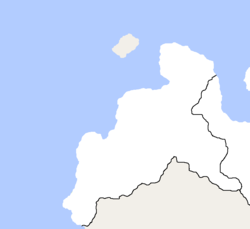 During the Lákarpa War, a small detachment of the main invasion force was directed to occupy Uískoma Peninsula to defend the western Litorál Province from Lákarpa guerrillas. After the war, a portion of this occupied region was annexed for the creation of the Lákarpa S.A.R, with the rest of the area being slated for future purposes. Years later, in 1679, mining companies expressed interest in the region. The Nadcraši passed a decree for the companies to prospect the region for minerals, and for temporary camps (these would later become the towns of Rúmla and Káša) to be established. The companies found silver and copper deposits in the area, and thus petitioned the Nadcraši for the annexation of the area. The annexation act passed with a vote of 205-95.

Due to Stormark's annexation of what was the Kingdom of Norrland, an influx in Norrlander refugees came to Palesmenia. Many communities of Norrlanders where allowed settlement rights in the territories. Many other immigrant and tribal communities (mostly Lákarpa) settled in the area for an opportunity to start a new life in the frontier.

It is rumored that after the population of the territory exceeds 50,000, it will either become a full state or be divided into 2 or more provinces.

The area features a rocky, cliff lined coast with a flat inland. To the northwest of the territory lies the Frankish occupied Hávalà Island. Most of the inland is swampy, which supplies water for agriculture in the area. The southern border of the territory is defined by the Öuér (Palesmenian Spelling: Óuer) River, which begins in the Lákarpa S.A.R.