The Kampog'ye Kubya Ha'll Aúskahrí Hil'yédi Komunistyi (English: Communist Club of Workers of Former Kampong) is a banned Palesmenian political party. Often given the nickname "'Idilis" and the "Burning Path" by other parties. Its formation was directly due to calls of the "Radical Impeachment of the monarchy" by radicals in the south of Palesmenia. After The Canopy Offensive, the party fell mostly dormant with their paramilitary branch dissolved. This doesn't stop many people from claiming to be a member of the party, but these reports are mostly false. 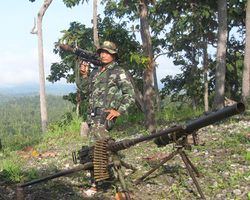 A KAT soldier ready to gun down his prey

The KAT is the armed paramilitary wing of the party. They are known for waging guerrilla warfare against the government in the dense forests of the south, adding much to the already volatile activities happening in that area. However, on December 15, the KAT forces capitulate, leading to the dissolution of the KAT and the complete ban of the complete dissolution of the KKHAHK.