The CrFA is responsible for the management of the three professional Craitish football leagues and the two club cup competitions, as well as the organisation of the national team. It also gave development help to the Non-League before it was disbanded.

The CrFA is a founder member of the FMF and the EMUFA, despite now being a member of the WMFA, and its President is King Craitman.

The CrFA was created by King Craitman soon after the founding of Craitland, although the exact date is unknown. Between the CrFA's foundation and Craitland's first claim on Micras, the organisation began its running of the league and cup tounaments in the nation.

After Craitland claimed land on Micras, the CrFA became more active in the intermicronational football scene, and the national team was submitted to play in the first FMF World Cup in 2006. Since then, the CrFA has organised the national team for other tournaments, qualifying games and friendly matches.

In 2014, following that year's World Cup, the CrFA switched its allegiance to the WMFA. 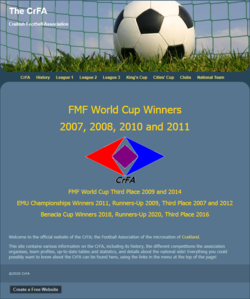 Screenshot of the CrFA homepage as of December 2020.

The CrFA is responsible for the organisation of the following competitions:

The CrFA was renowned for the upkeep of its own official website, which has been in existence since January 2007. The site has become the primary resource for statistics relating to Craitish football, encompassing a complete record of national team matches and players, and detailed homepages for each of the ten League 1 clubs. However, the site is due to be retired by its hosting services in March 2021, with no plans for it to be relocated elsewhere, and as of January 2021 is no longer being updated.