The CrFA League 1, commonly known just as League 1, is the top-tier football league in Craitland, run by the CrFA. The league involves ten teams, each playing thirty-six games, totalling 180 games, a season. The season begins in September and ends in May, with most games being played on Saturdays.

CrFA League 1 was founded in late December 2002, although the exact date is unknown, and the first season kicked-off in January 2003 with six teams.

Six seasons were contested with the league having six teams until a CrFA initiative expanded the league to contain eight clubs in 2009.

The number of fixtures each team plays per season was doubled for the 2011 season onwards.

The league was once again expanded, from eight to ten teams, from 2013 and has maintained this format ever since.

A total of six clubs have won CrFA League 1 at least once, with three having lifted the title on multiple occasions. Two clubs have successfully retained a title in the league's history, with one—Cherry Trees FC—having won back-to-back championships on three occasions and also winning three consecutive titles once. Five of the clubs to win the league have spent the entirety of their history in the top flight, with Eĵars Town FC the only winning club to have previously played in a lower division. No title-winning clubs are yet to have been relegated from the division. 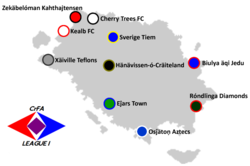 The league's clubs are required to register a 25-player squad for each season, which must include exactly three specialist goalkeepers. Over the years, during which the league has expanded both its number of competing teams and fixture schedule multiple times, this squad limit has also increased from an initial 16 for the 2003 season, through to 20 for 2006, 23 for 2008, and finally to the current 25 for 2009 onward. The deadline for the submission of these squads coincides with the end of the summer transfer window, allowing for players to be bought and sold for the first few weeks of the season before being finalised. These final 25 are subsequently the only players eligible for any medals awarded by the CrFA to clubs for their performances in its affiliated competitions; the league, King's Cup and Cities' Cup. Players who may play in any affiliated matches prior to departing the club in September are not eligible for any honours won later in the season; this includes players who depart on loan unless they are specifically registered in the 25.

While there is no rule preventing the registration of female players to the league, squads are almost exclusively male in composition and only one female player has ever been contracted to a League 1 club in the league's history. Additionally, CrFA rules on squad registration are known to have a number of unique restrictions specific to the association. Most notably, these include a specification that the numbers 1 to 25 are the only ones permissible to be worn on players' jerseys, and requiring that all 25 registered players must make a minimum of one league appearance throughout the season.

The CrFA permits League 1 clubs one transfer window per year, aligning completely with the FMF's annual summer window between 1 June and 30 September, in which they may amend their 25-person playing squad. Neither incoming nor outgoing transfers of any kind are allowed during the FMF's winter window throughout the mid-season month of January. The CrFA's administration of the league extends to setting its clubs' base budgets for transfers, which is an equal amount for each team per year, with any money made by player sales that window able to be added to this budget. The CrFA's annual transfer budget allowance typically ranges between Cr 20 million and Cr 35 million, with factors including the number of retiring players in the league, the previous season's continental performances and general transfer market trends attributing to the fluctuation of this amount.