Cristiano Steven João Ramirez is a Florian footballer who plays as a forward for Craitish club Sverige Tiem FC and the Floria national football team.

Cristiano Ramirez was born in January 1997 to a Florian mother and father from Réunion, in the southern slums of Northcliff. As a child he played for the amateur team, Moore Lane Aquaforce, where his father was the kit man. At Moore Lane, he was spotted by scouts from Northcliff United and signed for £1,500. He played at their academy until he was promoted to the senior team after a record amount of 36 goals in 18 academy games. After one year of playing at Northcliff United's academy he was diagnosed with a racing heart, a condition that could have forced him to give up playing football. He had an operation to fix this issue and he was discharged soon after the procedure, he continued training a month later.

In his early days of playing, Ramirez played for his local amateur club, Moore Lane Aquaforce. He showed his talents at a very early age scoring many goals during his time at the club. At the age of eight years, he was scouted by Northcliff United, going to be promoted to the senior team. At his time at the academy, he scored a record 36 goals in 18 games. For the 1st round of the 2018 Florian Cup. Ramirez was promoted to the senior to play the opposition, Westhill Rovers, a struggling Florian Championship side. Ramirez defied all expectations and became the first debutant to score a hat-trick. For the return leg at home, he was once again selected and this time scored both goals in the match. After these matches, he became a regular starter. Many years of success would follow leading Northcliff United to back to back AEFA Champions' Leagues and the Quadruple in the 2019-20 season.

After gaining legendary status at United winning many major trophies with the club. On 9 September 2021, Ramirez signed for CrFA League 1 club Sverige Tiem for a club-record fee of Cr 30 million. After his transfer to Tiem Ramirez would go on to win the Maillot d'Or, the most prestigious award for players after leading former club Northcliff United to a back to back AEFA Champions' League defense and leading Floria to their first World Cup win on home soil.

Cristiano Ramirez was called up for his country's first Under 21 match against the Kingdom of Coria. He failed to score and the Florian Republic closely lost the match 1-0. He still impressed leading to him being promoted to Northcliff United's senior team and a potential call-up for the national senior team after the Devon Shield. On January 3rd, 2018, he made his debut against ex-world champions Craitland scoring both vital goals in the match. Cristiano Ramirez was hugely important in the Florian Republic's 2018 Copa Apollonia qualification and scored 12 goals in the campaign, 5 of which were in the playoffs against Arboria. After the qualification campaign, Ramirez was given the captains armband and became the youngest to do so and he captained the team at the 2018 Copa Apollonia. At the tournament he scored 3 goals to become joint top scorer and the Florian Republic would finish third overall. In 2020, Ramirez would lead Floria to victory in the 2020 Copa Apollonia in Lamantia, Floria's first-ever international major honour. A year later under Ramirez's leadership, Floria would win their first-ever World Cup on home soil beating Craitland in the Final at Sports City. Ramirez created the most memorable moment in the tournament with a sublime free-kick from far out which knocked out defending champions Senya in the Semi-Finals.

Cristiano Ramirez is a versatile attacker, and is capable of playing on either wing as well as through the centre of the pitch, he is strong with both feet but prefers using his right foot. He is extremely quick with or without the ball. Ramirez is noted for his dribbling and flair, as well his wide range of tricks, most notably his stepovers. Free kicks are also his specialty. 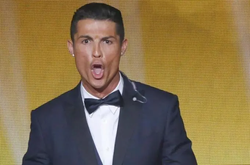 Ramirez doing his iconic celebration after winning the Maillot d'Or.

Listed below are his most notable honours.