The 2021 FMF World Cup was the thirteenth tournament of the FMF World Cup, and was held in Floria between 10 July and 15 August 2021. The twenty competing national teams all qualified successfully to be involved. The tournament's matches were played in ten stadiums in nine different cities around Floria.

The tournament was won by hosts Floria, for their first ever title, who beat Craitland in the final in Northcliff.

Floria was chosen as the host of the tournament after submitting the sole application. The FMF Executives agreed that the bid was suitable for hosting and announced that the host's national team would receive an automatic berth in the tournament, as well as the winners of the previous tournament. 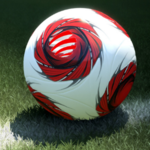 The official ball of the tournament

Following Floria's awarding of the hosting rights, the official tournament logo was unveiled. It features an abstract version of the globe in the Florian national colours on the left, and modern text and FMF logo on the right. The tournament mascot was also unveiled shortly afterwards; Barry the Wolf, a wolf dressed in the colours of the Florian flag with a football under his right arm. The official match ball of the tournament was provided by Farrar Sports; predominately white, the ball features circular designs of red and black strokes.

For the tournament, Floria's so-called "Traffic Light System" for immigration was relaxed, allowing all fans of the competing nations to enter the country without any restrictions as long they had a Fan-Pass, the official identification pass for fans from outside of Floria. For individual matches, the Fan-Pass, a passport and a match ticket were required to enter stadiums. The Fan-Pass also granted travelling spectators free access to Floria's public transportation links—such as bus, coach, metro and train—between host cities. Additionally, each competing nation was given 16,245 "Follow Your Country" tickets, continuing a concept introduced at the 2017 tournament, which entitled fans to a Fan-Pass and tickets to each of their nation's fixtures in the tournament. The remaining tickets for matches were sold equally between local fans and a general ballot.

An opening ceremony was performed at the start of the tournament and included a performance of the Festival Overture by the Confederate States Armed Forces Orchestra. A closing ceremony was also performed before the final which featured popular Florian EDM and pop music songs.

Teams were required to name a twenty-three-man squad for the tournament, with three goalkeepers, numbered 1 to 23.

Team of the Tournament