The Talenore national football team is the football team which currently represents the Shirerithian protectorate of Talenore, and previously represented the Iteran autonomous territory, Craitish protectorate and independent nation of the same name. It is a member of the EMUFA, and is run by the TaFA.

The team was founded in mid-2014 after Talenore's Micrasian claim was successful. In the following year's qualifiers, the team performed well and topped a tough five-team group with 15 points to reach the World Cup finals at their first attempt. Talenore's fortunes continued into the World Cup, as the team topped their difficult group on goal difference unbeaten with eight points to advance directly to the quarter-finals, where they were beaten 2–1 by Gerenia.

During the 2016 EMU Championships qualification rounds, Talenore was annexed by Craitland and maintained its separate FMF membership. In the qualifiers themselves, Talenore won their four-team group unbeaten with 14 points to qualify for EMU 2016. In the finals, the team advanced from their group with six points, but lost their semi-final 2–0 to Passas and third-place play-off 3–2 to Mercury to place fourth.

In early 2017, during the progress of that year's World Cup qualifiers, Talenore regained independence before becoming a protectorate of Shireroth shortly afterwards. In the qualifiers themselves, the team finished top of their five-team group with 17 points to advance to a second successive World Cup finals. However, the team finished bottom of their World Cup group after losing all four of their matches.

Talenore once again became independent during the qualifying rounds for EMU 2018 before being annexed by Iteru soon afterwards. In the qualifiers, the team topped their five-team group with 16 points to qualify for the finals. At EMU 2018, the team could only finish bottom of their four-team group with just a sole point to their name. Later in the year, Talenore was once again annexed by Shireroth.

In the 2019 World Cup qualifiers, the team finished second in their closely-fought six-team group with 13 points, ahead of both Nova English Korea and New Sussex by virtue of their shared head-to-head records. They advanced to the interconfederational play-off against Merenolitovina, whom they beat 3–1 on aggregate to qualify for a third finals. In the finals, the team advanced from yet another close group, placing third with four points ahead of Hoenn on goal difference before beating Passas 2–1 to reach the quarter-finals, where they narrowly lost to Mercury.

In the following year's EMU qualifiers, the team's good form continued as they topped their four-team group with 18 points after winning all of their matches and qualified for a third EMU finals. At EMU 2020, the team topped their group after winning all their matches before overcoming Passas 2–0 in the semi-finals but lost 1–0 to Mercury in the final to place second.

Ahead of the 2021 World Cup qualifiers, in late 2020, the team entered the inaugural edition of the Raspur Pact Nations League and competed in its top tier, finishing bottom of their four-team group with five points to be relegated. In the qualifiers, the team was more successful as they went unbeaten to finish top of their four-team group with 16 points to reach a fourth World Cup finals. In the finals, the team advanced from their group in second place with nine points, but were eliminated 1–0 in the play-off round by Calbion. 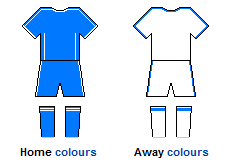 Talenore has used the following flags during its FMF affiliation: