The Hoenn national football team was the football team which represented the micronation of Hoenn. It was a member of the EMUFA, and was run by the Royal Hoennese Football Association. The team is the official predecessor of Nijima.

The team was founded in late 2016 after Hoenn's Micrasian claim was successful. They first competed in the following year's World Cup qualifiers, where they finished third in their four-team group with eight points; placing behind Valencia only on their head-to-head record. Later in the year, the team competed in the inaugural Devon Shield, where they progressed through the tournament unbeaten and finished as winners after beating Vyktory on penalties in the grand final.

The team competed in the 2018 EMU Championships qualification rounds, where they finished second in their five-team group with 17 points, behind Caputia on goal difference, to advance to their first finals. At EMU 2018, the team performed well and advanced from their four-team group in second with six points, but lost their semi-final 2–1 to Caputia before beating holders Passas 2–0 to secure third place.

Hoenn's success continued into the 2019 World Cup qualifiers, where they topped their six-team group with 27 points to qualify for their first ever FMF World Cup finals. In the finals, the team finished fourth in their group with four points and missed-out on a play-off round place on goal difference to Talenore. Hoenn left Micras soon afterwards following the secession of Nijima. 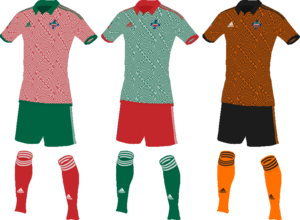 Hoenn used the following flag during the entirety of its FMF affiliation: